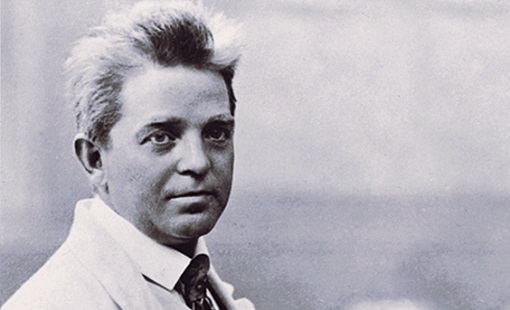 Mahlerman on Carl Nielsen, a composer of music ‘permeated by a sense of quiet happiness’…

It was inevitable I suppose, that the two greatest Nordic composers, exact contemporaries, should be linked together, but the truth is that Jean Sibelius and Carl August Nielsen had very little in common. The rugged, spirit-haunted wastes of Sibelius’ imagination reflect a landscape where humanity is, for the most part, absent. Nielsen also takes his inspiration from the natural world, but he is first and foremost a humanist, much of his music being permeated by a sense of quiet happiness – not something you could ever say about the great Finn. The Dane Carl Nielsen was born just six months before Sibelius, in 1865, and the puzzle for musicians and music lovers is why Nielsen, and his utterly distinctive music, have remained trapped in the giant shadow that Sibelius cast over 20th Century orchestral music.

The symphonic span formed the backbone to the lives of both men, the seven of Sibelius, the six of Nielsen – and it is the Beethovenian sense of aspiration and struggle that we can hear quite distinctly in all of Nielsen’s symphonies, particularly the last four. A click will take you back to early in 2011 when, among other ‘fifths’, I illustrated the extraordinary two-movement fifth of Nielsen in Five – this time it’s serious. Listen to that extract and tell me why music of such originality is not heard more often than it is?

The Fifth Symphony appeared in 1922 alongside the delightful Wind Quintet Opus 43, scored for flute, oboe, clarinet, french horn and bassoon. This life-affirming piece is perhaps the most radiant and captivating of all Nielsen’s output, and the second movement Minuet is a perfect example of the composer’s ability to meld rustic folk-inspired tunes to a classical framework. The movement has a conversational quality that unfolds in the ‘discussion’ between, firstly, the clarinet and the bassoon, followed by the flute and oboe.

The solo piano compositions of Sibelius are little more than salon-music. The corresponding body of work by his contemporary is possessed by the same virility and imagination that infects the orchestral music, and when the Chaconne for piano Opus 32 appeared in the tense year of 1916 it was a revelation. A bleak opening is followed by twenty variations of kaleidoscopic complexity, played at a high dynamic level, with dissonance threatening to take the upper hand until the last few variations resolve from D minor to a contemplative D major. A masterpiece of pianistic imagination.

I had the great good fortune to see/hear the incomparable John Ogdon several times before his premature death in 1989. This gentle giant of a man had an appetite for music that was quite frightening in its intensity, and although he was rightly famous for his interpretations of the romantic classical repertoire, he was a fanatical champion of obscure music from the likes of George Lloyd, Richard Yardumian and Kaikhosru Sorabji. I also felt that the ever-modest Vladimir Ashkenazy, who shared the first prize in the Tchaikovsky Competition with Ogdon, was somewhat in awe of the Nottinghamshire man. Here the technical difficulties of the piece are as nothing in his hands, and he convinces us that yes, this composer, through the filter of J S Bach, is touched by greatness.

At the end of the Great War the composer introduced a short orchestral Pastorale based around Ovid’s Metamorphoses, Pan and Syrinx and, with its distinctive soundworld, it quickly became one of his most popular works, and remains so to this day. He had, by this time, developed the ability to think easily and naturally in extended paragraphs, in a way that when you hear the beginning, the conclusion is implicit within it, a skill not shared by many composers, and one that would serve him well when writing the last three symphonies. No piece that centres on Syrinx is going to be light on wind-playing and nor is this score, littered as it is with post-Debussian impressionism and dreamy chamber-musical effects. Why, I wonder, do we hardly ever hear it in the concert-hall?

In the first half of the 20th Century the name of Carl Nielsen was almost unknown outside Scandinavia. The turning point came at the Edinburgh Festival in 1950 when the Danish State RSO played the powerful Fifth Symphony and followed-up a year later at the RFH with a performance of the Fourth, The Inextinguishable. It would not be too much of an exaggeration to say that they created a sensation – and soon afterwards, at last, Nielsen’s music started to be heard on radio and LP records. I became hooked in the 1960’s when Leonard Bernstein’s white-hot performance of the Fifth with the NYP was released on vinyl, and spent about a year on my turntable. It led me, of course, to an exploration of the rest of the canon, including the weird and wonderful Sixth, the ‘Sinfonia semplice’, which is anything but ‘simple’. Another of the ‘named’ symphonies is the Third Symphony ‘Espansiva’ dating from 1911, the year of Mahler’s death. Uniquely in the cycle it contains, in the wonderful second movement Andante pastorale, wordless vocal parts for a baritone and soprano, lending the piece an otherworldly quality unique in 20th Century symphonic music.

2 thoughts on “Great Dane – The Music of Carl August Nielsen”