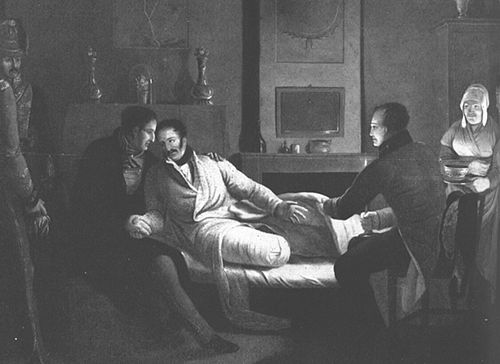 The above photo shows Lord Uxbridge recovering from the shock of losing his leg – a leg which later went on to become a celebrity in its own right. And so begins another strange Wikipedia article…

Lord Uxbridge’s leg was shattered by a cannon shot at the Battle of Waterloo and removed by a surgeon. The amputated limb went on to lead a somewhat macabre after-life as a tourist attraction in the village of Waterloo in Belgium, where it had been removed and interred.

Henry Paget, 2nd Earl of Uxbridge, later the 1st Marquess of Anglesey, commanded 13,000 Allied cavalry and 44 guns of horse artillery at the Battle of Waterloo. At about 2:30pm, at a critical stage in the battle, he led a charge of the 2,000 heavy cavalry of the Household Brigade and the Union Brigade to throw back the French. The charge succeeded in sweeping the French infantry away in disorder, but Uxbridge was unable to rally his troops, who ran on in pursuit and were cut up by counter-attacking French cavalry. Uxbridge spent the rest of the battle leading a series of charges by British light cavalry formations, and had eight or nine horses shot from under him.

One of the last cannon shots fired on 18 June 1815 hit his right leg, necessitating its amputation above the knee. According to anecdote, he was close to the Duke of Wellington when his leg was hit, and exclaimed, “By God, sir, I’ve lost my leg!”, to which Wellington replied “By God, sir, so you have!”

After receiving his wound, Lord Uxbridge was taken to his headquarters in the village of Waterloo. There, the remains of his leg were removed by surgeons, without antiseptic or anaesthetics. In recognition of his bravery, the Prince Regent created him Marquess of Anglesey and made him a Knight Grand Cross of the Order of the Bath five days after the battle.

Lord Uxbridge, true to his nature, remained stoical and composed. According to his aide-de-camp, Thomas Wildman, during the amputation he smiled and said, “I have had a pretty long run. I have been a beau these forty-seven years, and it would not be fair to cut the young men out any longer.” According to another anecdote his only comment through the dreadful procedure was, “The knives appear somewhat blunt.”

According to the account of Sir Hussey Vivian recorded by Henry Curling in 1847:

Just after the Surgeon had taken off the Marquis of Anglesey’s leg, Sir Hussey Vivian came into the cottage where the operation was performed. “Ah, Vivian!” said the wounded noble, “I want you to do me a favour. Some of my friends here seem to think I might have kept that leg on. Just go and cast your eye upon it, and tell me what you think.” “I went, accordingly”, said Sir Hussey, “and, taking up the lacerated limb, carefully examined it, and so far as I could tell, it was completely spoiled for work. A rusty grape-shot had gone through and shattered the bones all to pieces. I therefore returned to the Marquis and told him he could set his mind quite at rest, as his leg, in my opinion, was better off than on.”

A further anecdote reports him saying “Who would not lose a leg for such a victory?” The saw used to amputate his leg is held by the National Army Museum. Uxbridge was offered an annual pension of £1,200 in compensation for the loss of his leg, but refused.

The owner of the house where the amputation took place asked if he might bury the leg in his garden, later turning the site into a kind of shrine, as for a relic. Visitors were first taken to see the bloody chair upon which Uxbridge had sat during the amputation, before being escorted into the garden, where the leg had its own ‘tombstone’, inscribed as follows:

Here lies the Leg of the illustrious and valiant Earl Uxbridge, Lieutenant-General of His Britannic Majesty, Commander in Chief of the English, Belgian and Dutch cavalry, wounded on the 18 June 1815 at the memorable battle of Waterloo, who, by his heroism, assisted in the triumph of the cause of mankind, gloriously decided by the resounding victory of the said day.

The leg attracted an amazing range of tourists from European society of the very top drawer, from the King of Prussia to the Prince of Orange. It was a nice earner for Monsieur Paris and his descendants, all the way down to 1878, when it was the occasion for a minor diplomatic incident. Uxbridge’s son visited, to find the bones not buried, but on open display. On investigation by the Belgian ambassador in London, it was discovered that they had been exposed in a storm which uprooted the willow tree beside which they were buried. The ambassador demanded repatriation of the relics to England but the Paris family refused, instead offering to sell the bones to the Uxbridge family, who, not surprisingly, were enraged. At this point the Belgian Minister of Justice intervened, ordering the bones to be reburied. However, the bones were not reburied; they were kept hidden. In 1934, after the last Monsieur Paris died in Brussels, his widow found them in his study, along with documentation proving their provenance. Horrified by the thought of another scandal, she incinerated them in her central heating furnace.

Uxbridge’s close family lost several limbs in the service of the United Kingdom during the Napoleonic Wars: his brother, Major-General Sir Edward Paget, lost his right arm in the crossing of the Douro during the Second Battle of Porto in 1809, and his daughter lost a hand tending her husband on a battlefield in Spain. 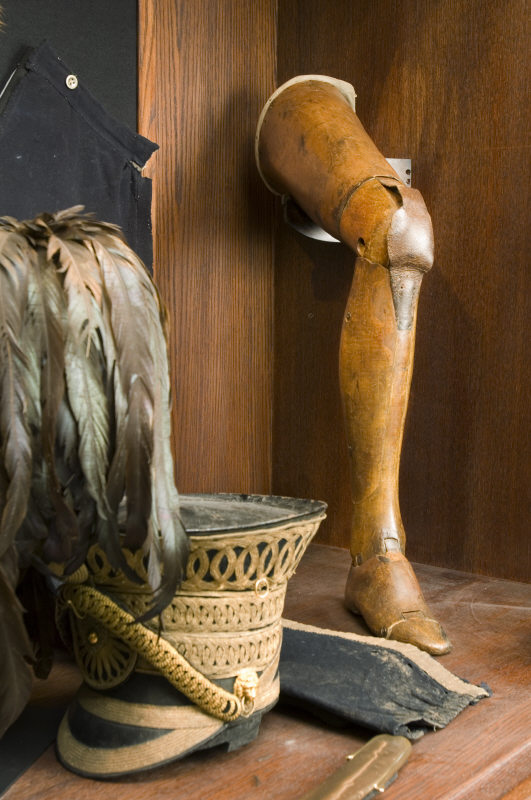 Uxbridge himself used an articulated above-knee artificial leg invented by James Potts, with hinged knee and ankle and raising toes which became known as the Anglesey leg, after his marquessate. One of the artificial legs designed by Potts and worn by the marquess is still extant, preserved at Plas Newydd in Anglesey, as is also a leg of the hussar trousers worn by the 1st Marquess at Waterloo. The loss of his leg did not impede the Marquess of Anglesey’s career – he rose to become a Field Marshal and Knight of the Garter, twice serving as Lord Lieutenant of Ireland and twice as Master-General of the Ordnance; he is the “Marquess of Anglesey” after whom many British pubs are named.