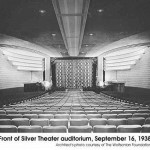 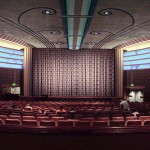 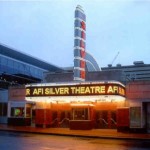 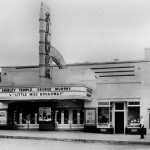 Rita celebrates an Art Deco gem in an unlikely location…

Where would you expect to find the venerable American Film Institute’s movie theater? There is one in Los Angeles of course, on the non-profit organization’s eight-acre campus in the Hollywood hills. You might expect their second theater to be in New York or perhaps Chicago. But Silver Spring, Maryland? Just another of the nondescript suburban communities that ring Washington D.C. Silver Spring at least boasts the serendipitous name that segues easily into the phrase “the silver screen.” One imagines AFI executives poring over a map looking for movie related place names, but it was actually something specific that drew them to this obscure town. Silver Spring had a hidden treasure just waiting to be discovered: an abandoned, dilapidated Art Deco movie theater, which would become the jewel in its crown.

I first knew Silver Spring when my husband began working there two decades ago. I sometimes drove to meet him after work, parking in an underground garage that looked as though it might collapse at any moment, and feeling very nervous walking the deserted streets alone. The only people out and about in the evenings seemed to be the muttering homeless. It was hard to imagine that this was once a vibrant, bustling downtown with popular stores, restaurants, and four movie theaters. Silver Spring had suffered the fate of many urban centers in the 1970’s and 80’s. People moved further out to the newer suburbs and began shopping at the new malls. Life was sucked out of the old downtowns and it didn’t look as though it could ever come back. But in the late 1990’s the trend was reversed and Silver Spring became a notable success story in urban redevelopment thanks to its flagship project, the restoration of the old Silver Theater by Montgomery County Government and the AFI.

Designed by noted movie palace architect John Eberson in the Art Deco style, the Silver Theater opened in 1938 and became a hub for the close knit Silver Spring community. It was saved from the wrecker’s ball in the 1980’s largely by the efforts of the Art Deco Society of Washington, which succeeded in having the building named to the National Register of Historic Places. But the theater continued to sit abandoned and further deteriorating from roof leaks until Montgomery County acquired the property in 1996 and formed a restoration partnership with the AFI. It required faith and vision to undertake the project for no trace of the theater’s former glamor could be seen in the water-damaged walls, collapsed seating, and debris strewn everywhere. But the Art Deco Society had preserved the architect’s original plans, so a meticulous, historically accurate restoration was possible, transforming the ugly duckling into a swan. In 2003 the historic building reopened as the American Film Institute Silver Theater and Cultural Center.

I was lucky enough to attend the opening due to my husband’s involvement in the overall redevelopment project for Silver Spring. Walking into the restored theater was a gasp-inducing experience as the gorgeous Art Deco interior glowed with the rich colors and decorative details envisioned by Eberson, who wanted visitors to feel as though they were entering a luxury cruise ship. Watching a film in this environment feels far more of an occasion than going to a typical mall movie theater. And the program of independent features, foreign films, documentaries, and classics can be seen nowhere else in the area. Among the films I have enjoyed over the years are the original uncut Lawrence of Arabia, films in Flemish, a documentary about Pete Seeger which was as much social history as musical odyssey, and I think my favorite film of all, The Leopard, from the Italian novel by Giuseppe Di Lampedusa. This book is on my personal list of ten favorite novels but I had no idea it had been made into a film until I saw the AFI Silver listing. I was a bit suspicious of the idea of Burt Lancaster in the role of the Prince, especially with his voice dubbed in Italian, but somehow it all worked magnificently and the final lengthy ballroom scene lingers in the mind as one of the greatest ever filmed.

The restored Art Deco theater was just the beginning of Silver Spring’s revival. The Discovery Channel built its headquarters just down the road from the theater and suddenly this down-at-heel suburb acquired a trendy, urban vibe. Today the streets I was once afraid to walk down are so crowded with people it can be hard to make your way to one of the numerous restaurants and shops that draw crowds at all hours. One year it really did feel a bit like Hollywood. The AFI Silver rolled out a red carpet for attendees to an Oscar Night Viewing Party. Local celebrities, well mostly politicians and those aspiring to celebrity, wore ostentatious evening dress and were greeted and interviewed on TV just like the real thing!

This year the AFI Silver celebrated the 75th anniversary of the theater’s opening in 1938 with a special screening of the film that played on that opening night, Four Daughters with James Garfield making his debut. The film was definitely a period piece with Claude Rains of Casablanca fame in the very different role of an over-indulgent father. It was easy to see why James Garfield was immediately catapulted to stardom because from the moment he appeared he stole every scene, making the cast of seasoned actors look like amateurs. The original cartoon and newsreel from 1938 added an authentic period flavor to the evening.

Many long-time residents of Silver Spring have fond memories of their youthful visits to the original movie theater and now they can share them for posterity. To mark the 75th anniversary AFI Silver is sponsoring Silver Memories, a Tumblr compilation of memories and photos. One story goes that many people remember their first date at the Silver Theater, holding hands and kissing in the private darkness of the balcony. A classic case of embroidering and romanticizing our memories, for the Silver Theater never had a balcony. Like the movies, our memories sometimes require suspension of disbelief.

3 thoughts on “A Touch of Hollywood in Maryland”