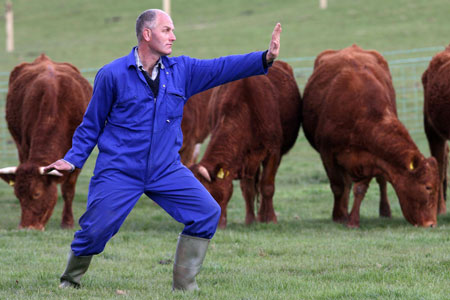 Every weekday morning for the past three months, I have been leaping out of bed extremely early and cutting two or three brisk Boswellian capers around the room. This is to ensure that I am wide awake in time for BBC Radio 4’s Tweet Of The Day at 5.58 AM. I take my ornithological education seriously.

An unintended consequence of my regime is that I have been listening regularly to the programme immediately preceding the birdy one, to wit Farming Today. Indeed, I have been listening to it with increasingly rapt attention. Nige seems to think Farming Today is “the most reliably soporific thing on radio”, so I must assume our esteemed Editor Emeritus has taken leave of his senses. Sleep is the furthest thing from my mind when I bend my ears to the strange world of the programme I have come to think of as “Moany Farmers”.

By god!, they are a moany lot. I had not previously realised that, at least in terms of British farming, 1993 was an annus mirabilis. This, however, is the point made again and again by the moany farmers, who regularly lament how much better everything was precisely twenty years ago. It is fair to say that they are, by contrast, very imprecise regarding exactly in what ways things have gone to pot, but gone to pot they have, in all the various farming sectors. (“Sectors” is a favourite word on Farming Today, but at least we know what it means, unlike the many incomprehensible pieces of eurojargon often spouted by presenters and farmers alike.)

I admit there are times when I suspect that the farmers taking part in the programme are, in reality, actors. This is because, aside from the occasional posh farmer, they all speak in that accent best described as “generic BBC peasant”, familiar to those of you who have watched Lark Rise To Candleford or any BBC drama featuring rustics.

Punctuating the litany of moans are moments I can only describe with that much overused, and misused, term, surrealist. The other day, for example, the presenter gushed about “towers of cheese”. She did not specify whether they more closely resembled the Towers of Trebizond or Leonard Cohen’s Tower of Song, but then much is unexplained on this show.

What are we to make of the farmer who – ventriloquising, I think, a dog – uttered the line “I see the chicken – good thing happens”? Is this a piece of doggy rustic wisdom? Is it a spell or an incantation? Is it true that a good thing will happen whenever one spots a chicken? Who knows?

We are on no surer ground when it comes to horses. According to Farming Today, our sceptred isle is both overpopulated and underpopulated by horses. These assertions – presented as facts rather than opinions – were made within five minutes of one another. But the listener was given little time to fret about that, for we were then told about the “equine lifestyle”. I had no idea horses had a lifestyle, as opposed to simply a life, and indeed no further information was given as to what this lifestyle might consist of. It is all very perplexing.

Boswell cut his brisk capers to remedy feeling “heavy, confused, and splenetic” – not dissimilar to the way one feels after the fathomless yet fascinating mysteries of Farming Today. It is with relief that the clock ticks to 5.58 and we hear the sounds of the male cuckoo, the song thrush, the swift, the wood warbler, the nightingale (parts one and two), the garden warbler, the blackcap, the grey heron, the Dartford warbler, the shag, the greenfinch, the tawny owl, the garganey, the redshank, the spotted crake, the guillemot, the storm petrel, the sedge warbler, the female cuckoo, the nightjar, the kittiwake, the puffin, the razorbill, the goldfinch, the barn owl, the Manx shearwater, the quail, the Arctic tern, the gannet, the great skua, the golden oriole, the lesser whitethroat, the cormorant – especially the cormorant!, – the wryneck, the little egret, the common sandpiper, Savi’s warbler, the marsh warbler, the reed warbler, the corn bunting, the yellowhammer, the turtle dove, the Sandwich tern, the common buzzard, the osprey, the corncrake, the house martin, the coal tit, the tree pipit, the herring gull, the kingfisher, the cirl bunting, the spotted flycatcher, the sparrowhawk, the dotterel, the lesser black-backed gull, the red-necked phalarope, the black-browed albatross, the whinchat, the kestrel, the little tern, the red-backed shrike, the stonechat, or, this Friday morning, the house sparrow.

12 thoughts on “The Fathomless Mysteries of Farming Today”