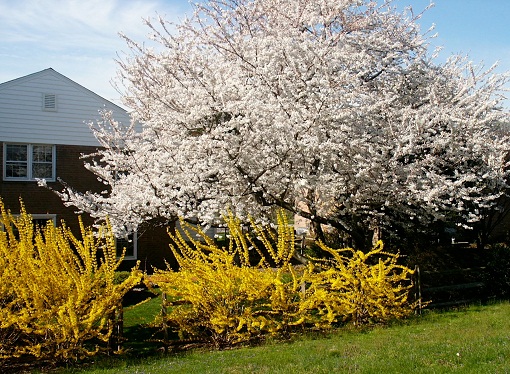 Glorying in the brief Washington spring, Rita proves she really is English by feeling nostalgic for something she never had…

As I write the demented robin who inhabits the dogwood tree in our garden is repeatedly flinging himself against the window in a kind of avian kamikaze assault. The thump, thump, thump of bird meeting glass is a strange counterpoint to the sweet tweeting and trilling of the other garden birds. I don’t know why the robin does this every day for hours, but it is disturbing and quite out of sync with the pretty scene painted by blossoms of forsythia, cherry, dogwood, azalea, and lilac in the Washington area spring garden. All the more precious because it is so fleeting, spring in Washington is a time of splendid garden beauty. But as the blossoms fade and fall, a suffocating blanket of hot, muggy air stifles the enthusiasm of even the most devoted gardener. In spring I dream of creating a perfect English garden here on foreign soil, but as soon as the heat and humidity descend I scurry inside to air conditioned cool while my garden runs wild with overgrown weeds.

Can you be nostalgic for something you never had? I may long for the glories of an English garden now like a longing for home, but in truth I never had a proper English garden and certainly never had any interest in possessing one until I became an exile. I was a bit of a bookish snob in my youth and wouldn’t have been caught dead with a trowel in my hand.  The earliest garden I remember at the house in Dagenham where I was born had an air raid shelter repurposed as a garden shed. During my growing up years on the Marks Gate council estate our garden was a rectangular patch of scruffy grass that served as a soccer pitch for my brothers and a place to hang out the washing for my mother. There were a few nondescript bushes towards the end screening a wild area where we played jungle explorers and built houses for fairies out of leaves and twigs. Hedgehogs and a tortoise were our occasional companions. The houses were built in an oval facing outwards, with the central space divided into back gardens by wire fencing so we could easily spy on our neighbors. When London was declared a smoke-free zone in an attempt to clear the Dickensian yellow fogs, garden bonfires were outlawed.  That didn’t deter one neighbor who regularly burned enormous fires belching thick smoke in defiance of the regulations.  We wondered how he managed to find so much stuff to burn in his tiny garden and of course imagined dastardly deeds must be behind it.

I suppose the only real gardener I knew was our next-door neighbor Mr. Wingfield, though I never actually saw his garden.  He built a high wooden fence to screen it from prying eyes and was said to grow prizewinning roses. We felt sorry for his two sons who weren’t allowed to play in their garden. If we threw a ball over the fence by mistake he didn’t throw it back as the other neighbors did.  He once complained to my parents that we had destroyed one of his prizewinners with an errant ball. He seemed to think it was a deliberate act of destruction in retaliation for our missing balls. We were indignant. How were we supposed to know it was prizewinning? And anyway, since we couldn’t even see over the fence how could we take such accurate aim? The incident made for rather awkward neighbor relations for a time as we had apparently denied him the opportunity to win first prize in some prestigious flower show. Years later I was in their house for a reason I don’t recall. I saw a large net bag hanging in the storage room, filled with all the balls that had gone over the fence during our childhood. Seeing me staring at it in amazement, his wife gave a rueful, apologetic look but nothing was said by either of us.

After we all grew up and left home my mother finally had time to enjoy her garden. I returned home for the first time in seven years one summer in the late Seventies. I was amazed at the change. The lawn was no longer mud-churned from soccer games but green and lovely to sit on in the, to me, cool afternoons. My baby lay on an old tea cloth in the shade while my father sunbathed shirtless in a deckchair. According to him the 70F degree temperature qualified as a heat wave. My mother had planted some nice shrubs and flowers and built a rock grotto with a statue of the Virgin Mary. Some of the rocks had seashells embedded in them – I don’t know how she came by them – but one of them sits in my own garden now.  Somehow I got it through customs! The rose-growing neighbors had moved away and children played in the newly visible, unkempt garden. I tossed a ball back when it came over the fence.

My California years coincided with the hippie back-to-the-land movement and we participated in a desultory sort of way by trying to grow vegetables. The only success I remember is giant zucchinis, which forced us to eat rather tasteless zucchini bread for months on end. My dream of an English garden really began at Sissinghurst on one of my visits home.  Here the idea of a garden could be fused with my interest in literature and history. That such a literary luminary as Vita Sackville-West could handle a trowel made it more acceptable, even glamorous. On my return home to Maryland I began checking out every English gardening book acquired by the library. I became a fan of Elizabethan knot gardens and Capability Brown landscapes.  ot that I had any hope of creating one of those in my humble suburban plot. But the classic English border, lush with old-fashioned perennials; that was my dream.  Alas it was harder to achieve than I imagined. It turns out that those old-fashioned flowers like hollyhocks and foxgloves that flourish in the English climate are no match for the heat of Washington. The hopeful little plants of spring would droop just as I do once the weather turned humid.  And gardens must be tended. You cannot plant in spring and ignore in summer, but that is just what I do every year as I retreat into the air conditioning, an English gardener defeated once more. 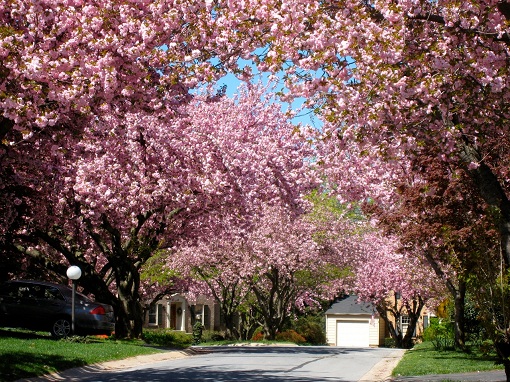 So I appreciate every pleasant, cool day of spring.  It will be over far too soon.  My favorite poet Gerard Manley Hopkins wrote:

Nothing is so beautiful as spring –
When weeds, in wheels, shoot long and lovely and lush.

Father Hopkins was obviously not a gardener.  He loved weeds!  He praised nature in the raw and “all things counter, original, spare, strange.”  I welcome his ghost into my summer garden.  He will feel quite at home amid all the long, lovely, lush weeds.  And perhaps he can persuade St. Francis, or Pope Francis, to do something about that poor, mad robin.

6 thoughts on “The Dream of an English Garden”