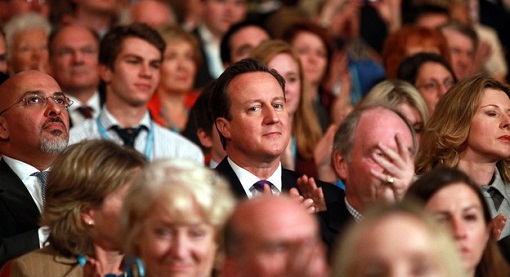 The ‘swivel-eyed loons’ are back! But have you ever wondered where that fine old description of shire Tories comes from? Allow Mr Slang to enlighten you…

My apologies to those who find such things of world-shattering, albeit momentary import, but I am at a loss to see quite where we are to find justification for the furore over the dismissive phrase ‘swivel-eyed loons’, as uttered by some Tory grandee (if grandee one may be when, ennobled or otherwise, one’s job renders one essentially an up-market Bob Cratchit) who may or may not have been Lord Feldman.  (My Lord, being speccy, is not in any case swivel-eyed: he qualifies as four-eyed, the addition of terms such as git being at the reader’s discretion). Setting aside the inevitability that like the politicians themselves, the excitement and its progenitor will, even if here today, like all such exhalations of hot air certainly be gone tomorrow, the phrase itself boasts a lengthy pedigree – surely something that should endear it to Tories of every stripe – and I, though unaffianced, am delighted to see it getting so widely reported an outing.

Swivel-eyed loon. Could be a fish, but maybe that would be goggle-eyed, though that too might stand synonymic. But we must stick with the facts. Swivel-eyed. A delightful image, the very mark of instability. Is it a bird, is it a plane? No it’s Tory-man, or at least those who inhabit the wilder shores of Little England? Mots justes, squire, mots bleedin’ justes.

To reverse the order and gaze first upon the loon, which abbreviates lunatic and is re-expanded in slang as looney, or even looney tune. Loon comes on stream in 1830, and possibly links back to luna, the moon, thus suggesting that such  individuals are ‘moonstruck’, although an alternative origin puts up the aquatic bird the loon, its ‘craziness’ referring to its actions in escaping from danger (surely quite sensible?) and its anthromorphically ‘mad’ cries. Mid-15th century standard English also uses loon, to mean a worthless person, a rogue or an idler; it is a homonym but the etymological jury remains out. Loony was first embraced by ‘Boz’ – are we surprised – in a report included in his 1838 Memoirs of Joseph Grimaldi which noted that ‘Sadler’s Wells opened at Easter, April 3, 1809 […] Grimaldi played Clown, with the Song of “Looney’s Lamentation for Miss Margery Muggins”.’ Loony bin, the Bedlam de nos jours, is currently recorded from 1909 and by P.G. Wodehouse, to whom, at least by me, are attributed its first four citations. The bin can also be a loony farm, house, pen and roost. Wodehouse also kicks off looney doctor (‘Old Sir Roderick, who’s a loony-doctor and nothing but a loony-doctor, however much you may call him a nerve specialist’), though do a loony – that which my generation, with similar sensitivity, termed spaz out – is our contemporary and comes from the modern playground. Talking of my generation one cannot avoid the hippie looning, a form of dancing for which drugs, while a stimulus, were not an excuse, and indeed loon pants: the memory, however is over-sufficient, especially amplified as ‘elephant cord loons’ and those born more fortuitously should count themselves blessed.

Finally looney tune, first used by Hal Ellson in 1957  (‘The other boys had mothers, but he had a banana! A looney tune’) and named for the series of film cartoons created for Warner Bros. by the team of Hollywood animators Hanna-Barbera and released 1930–69 though younger folk will probably have seen them on TV; ‘Bugs’ Bunny and ‘Daffy’ Duck, madcaps both, naturally starred. Later the term was popularized by another Hollywood figure, Ronald Reagan, to describe such fellow-statesmen as Libya’s Colonel Gaddafi. Insults of this nature, one may note, rank as politics, though some may feel incorrect within the international arena. For political correctness one may note that the late President, far from joining the looney tunes himself, was tragically declining into advanced senility.

Now ’ere, as the great Max Miller might have said, ’ere’s a funny thing. Where do you, lazengentz, think swivel, defined by the OED as ‘a simple fastening or coupling device made so that the object fastened to it can turn freely upon it […] e.g. a ring or staple turning on a pin or the like’, comes from. No guesses? I’ll tell you: swive. And if you want the OED for that, it is ‘to have sexual connection with, copulate with (a female).’ Or to be more precise, they both hail from OE swifen, to move in a course. Slang has made use: to cop a swivel is to take a look, swivelly has briefly meant drunk while in New Zealand prisons swivel-neck refers to a male fellator (one thinks of the better-known Little Miss Roundheels, though it is her feet rather than neck that are so conveniently equipped). But as our term of reference and coupled with –eyed, it seems to be a creation of Smollett, he of Tristram Shandy, though this use comes in a 1757 comedy The Reprisal; or, The Tars of Old England where the captain demands, ‘Swing the swivel-ey’d son of a whore!’ Swing, of course, referring to a wry look and pissen britches rather than anything less terminal. The initial use is literal: the image is of one whose eyes squint. Thus the back-formation swivel-eye, a squint. We must wait for Cockneydom’s pride ’Arry, in 1887, to encounter the term in a more generally abusive sense. Indeed, it is an uncharacteristically self-analytical ’Arry who tells his friend Charlie, plus the Punch readership: ‘Wot swivel-eyed jossers the best on us is, mate, at times!’ (’Arry also used on the swivel, meaning ‘showing your paces’, though it was onlookers whose heads do the turning.)  The term persists: and thus in Birthday (2001) the resolutely proletkult Alan Sillitoe apostrophized, ‘the toffee-nosed poxed-up loudmouthed swivel-eyed fuckpigs.’ Which, dare I say, brings us back to the current imbroglio.

4 thoughts on “On Swivel-Eyed Loons”