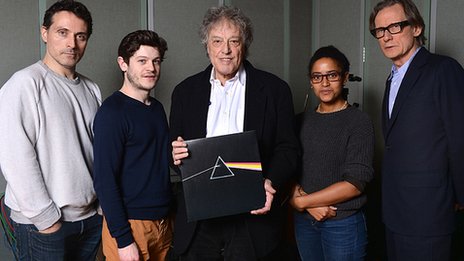 Pink Floyd’s enduringly popular Dark Side of the Moon turned 40 this year. But, as Daniel Kalder explains, there was plenty of great rock music around in 1973…

This March Pink Floyd’s Dark Side of the Moon turned 40 years old to some ballyhoo in the press. Apparently Sir Tom Stoppard [above] was so excited by the anniversary that he wrote a radio play which will soon be performed, or may already have been performed- since I don’t care I can’t tell you for sure.

I’m not going to be too snarky here – Dark Side of the Moon was the first album I ever bought with my own cash, at some point in the late 80s, when my peers were listening to rubbish like The Soup Dragons. I played it a lot; Roger Waters’ sixth form level lyrics were pitched directly at the sensibilities of my angsty teen self: man, this is deep. Hey, did you hear that? He said “bullshit”. I still play it now and again, and with time I have come to appreciate keyboardist Rick Wright’s contributions more. After he was sidelined from the group Waters’ pomposity went into overdrive and the quality of the compositions deteriorated rapidly.

But Dark Side is just the tip of the iceberg as far as fine LPs of 1973 go. Indeed, 1973 was something of a banner year for music with many acts now considered “legendary” releasing records that were either their best or among their best. Fantastical musical styles such as glam and prog were in vogue, which enabled young English men to invent other identities, or explore absurd realities- and some Americans were visiting strange shores also:

Now for something a little more refined. By 1973 John Cale was already 31 years old, and he had been through many mutations in his musical career. A classically trained musician from Wales who had gone to the US on a scholarship, he fell in with the experimental New York set and took to playing very long drones on his viola, before meeting Lou Reed and adding all the avant-garde aspects to the first and second Velvet Underground LPs.

Next followed a stint as an A & R man/producer which saw him oversee the first Stooges LP, meanwhile cranking out a strange album of classical miniatures, a collaboration with Terry Riley and a bona fide pop record in the form of Vintage Violence. It was in 1973 however that he really found his voice as a composer and performer and released his best work- Paris 1919, recorded with members of the southern boogie combo Little Feat (who released their own seminal Dixie Chicken that year). It is an exceptionally fine album, literate and beautifully orchestrated. Here’s the title track as performed live by a still spry 70 year old Cale with some Swedes last year:

One of the most striking tracks on Dark Side of the Moon is “Time” which begins with a lot of ticking and chiming and ringing clocks, as engineered by studio maestro Alan Parsons. In 1973 however David Bowie also put a song entitled “Time” on his LP Aladdin Sane– and this one was not a rocker but rather a weird cabaret tune with ambiguous lyrics, performed with great drama by Bowie. “Time” also features striking semi avant-garde stride piano contributions from Mike Garson, an extraordinary jazz pianist; indeed Aladdin Sane marks the first time Bowie selected a truly leftfield collaborator who could add something alien to his music, greatly enriching it in the process. This is a tactic he would deploy again to great effect throughout the 70s with Brian Eno and the guitarists Robert Fripp and Adrian Belew.

I’d like to link to the berserk live performance on The Glass Spider tour, but the song isn’t quite the same without Garson’s playing:

If John Cale released his best record in 1973, then quite possibly his erstwhile collaborator Lou Reed did too, in the shape of the legendarily depressing LP Berlin. Recorded with Alice Cooper’s producer bob Ezrin (who would go on to produce Pink Floyds tedium opus The Wall) it was a concept album on the theme of an extremely destructive relationship that was stitched together from demos Reed had had lying around for years, and even included a song he had already recorded on his first solo album.  Widely reviled at the time of release, Lou Reed didn’t perform many of its songs live for the next thirty years or so at which point he went on tour with the record to rapturous critical response.

I bought this as a teenager and while I could get into the rocking A-side, I found the B side genuinely disturbing. It was easy enough to identify with Roger Waters’ angsty moaning, but Lou Reed was plumbing much darker depths of anguish, guilt, hatred and self-loathing. Berlin is a decidedly adult album that retains a stark and shocking power today, even if the music is beautifully orchestrated by Bob Ezrin. It’s not every day a rock star sings about a woman losing her children to the social services. I’d link to the live version, but unlike John Cale, Lou Reed has aged badly and his voice is atrocious these days.  Here’s “Sad Song”, in which Reed sings the unforgettable line: I’m gonna stop wasting my time/Somebody else would have broken both of her arms.

I could easily fill another Lazy Sunday with great LPs of ’73, but I am going to end this one with a track from Stevie Wonder’s Innervisions. Wonder was on an incredible creative roll in the early 70s; the music just poured out of him, and all of it was imbued with joy.  Alas, a childhood encounter with the horror of “I Just Called to Say I Love You” obscured the truth about his talent from me for too many years.  Wonder played most of the instruments on Innervisions himself, and mixed soul with jazz and funk and whatever else he fancied. Here we have the last track from the record, a warning from Stevie to his fans about the sinister fellow that is “Misstra Know It All”. Even then, there’s such exuberance and sheer delight in the act of making music that even this cautionary song about a wrong ‘un becomes somehow uplifting: