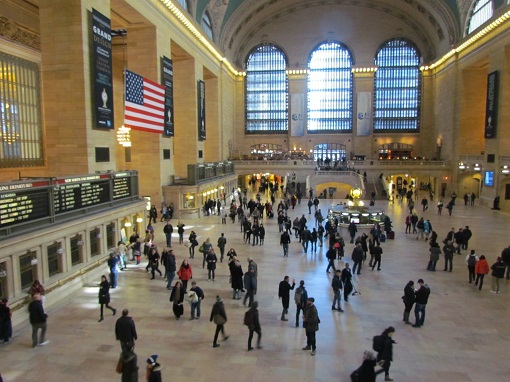 Bizarre Flemish coincidences and worshipping at the Temple of Apple in this dispatch, as Rita visits New York…

I first suspected something was amiss with my New York Subway app when it advised us to travel from Midtown Manhattan to the Lower East Side via Brooklyn, on the other side of the East River.  “Change trains at Atlantic Avenue and Flatbush,” ordered the app.  Clutching my iPhone as I swayed unsteadily with every lurch of the train, I realized those are Brooklyn street names.  I shared my doubts with my companions, one husband and two brothers.  Then something amazing happened.  A friendly New Yorker offered to help.  Confirming my suspicion about the Brooklyn detour, he recommended a different route before hopping off the train, leaving us to remember his complicated directions.

The four of us were in New York for five days and spent much of our time debating, I won’t say arguing, over where we were and how to get to where we were going.  We brandished dueling directional aids: my iPhone, San Francisco brother’s Android, my husband’s large foldout map (he’s a former Boy Scout), and London brother’s handy pocket guidebook (he being the renowned Luddite Frank Key).  The large map flapped uselessly in the bitter winds tearing through the New York streets, the iPhone and Android couldn’t agree with one another, and the tiny print in the Luddite guidebook was a chore to decipher.  But we were never actually lost because everywhere helpful, friendly New Yorkers came to our aid.  Whatever happened to New Yorkers’ reputation for abrupt rudeness?  Has the city character changed under the benign dictatorship of Mayor Bloomberg?  Really, they couldn’t have been nicer, from the young man in Chinatown who patiently helped my brother with the subway ticket machine to the elegant old lady with dog in Gramercy Park who asked if we needed directions.  We must have seemed ridiculous, walking along with eyes glued to our phones instead of looking up at the magnificent architecture.  I was determined to prove my iPhone’s worth, and fixated on the blinking blue dot marking our location on the notorious Apple map app.  A wayward blue dot it turned out, moving blocks away, first in one direction then another, while we were sitting perfectly still in a coffee shop.

Our phones seemed more useful for instant information when we had a question about a building or historic site.  When was Grand Central Station built we wondered, as we stood amid the swirling crowds in the magnificent space.  We turned to our phones, and San Francisco brother appeared smug about being first to find the answer.  That is until my husband started laughing and pointed to the enormous banner hanging above us.  100 it read, announcing celebration of the station’s centenary.  If we had just looked up, instead of staring at our phones.  In the “Where’s Waldo?” style photo of Grand Central Station above, the three Byrne siblings can be seen in solemn communion with our phones.

We took no chances and hailed a cab to find our way to the Soho art gallery event which had brought us all to New York.  Frank Key was invited to read from his work, excerpts selected by artist James Beckett to accompany a new book entitled, appropriately enough, Works of James Beckett with constant interjections by Frank Key. While my unassuming brother wallowed in his ascension to the pinnacle of the international glitterati, my librarian’s soul was drawn to the beautiful library just off the main gallery.  The narrow curving space held floor to ceiling art books.  As I browsed the shelves a name caught my eye.  Joseph Bueys, the very artist whose work I had dissed in my last Dabbler Dispatch!  There were over three shelves full of books about him; he obviously was a very important artist.  My thoughts returned to the S.M.A.K. Museum in Ghent, Belgium where I had laughed at his “shelving” installation.  At that moment I heard someone behind me speaking Flemish!  Now my siblings and I are half Flemish, our mother being from Ghent.  And in one of those weird serendipitous co-incidences that life churns out, a whole group of students from the University of Ghent were here in New York attending this event.  That is in addition to the group of young people from Antwerp we overheard speaking Flemish in our hotel.  Apparently you can’t move in New York without running into Belgians, of the Flemish persuasion at least. We did not encounter any Walloons.

But we did meet a rather extraordinary Frenchman.  Now what kind of restaurant would you expect to find at the address 10 Downing Street, New York?  A British themed pub perhaps, dispensing roast beef and Yorkshire pudding or steak and kidney pie?  But defying any associations raised by the address, the restaurant is French, headed by a genuine French chef.  We came there through connections of our San Francisco brother, a gregarious sort with friends in every city.  Chef Christophe treated us with the excessive hospitality due the entourage of a newly minted member of the international art set.  The food was delectable.  Even more memorable is how this Frenchman answered the question of why he left France.  “Because I can’t stand the French,” he replied without hesitation.  There was nervous laughter as we tried not to look as though we knew exactly what he meant.

In the remaining days of our stay we got a little better at navigating, taking long walks through the city just following the numbered streets and avenues.  Our London visitor remarked on the lack of crazy people wandering the streets, as used to be the case in New York and still is in Washington D.C. and San Francisco.  We learned that Mayor Rudi Giuliani rounded them up and bussed them out of town to haunt other jurisdictions.  Maybe that is why New Yorkers have become so nice.  But they haven’t solved the garbage problem.  Everywhere we went, from Chinatown to Park Avenue, bags of garbage were piled high at the curbs awaiting pickup. 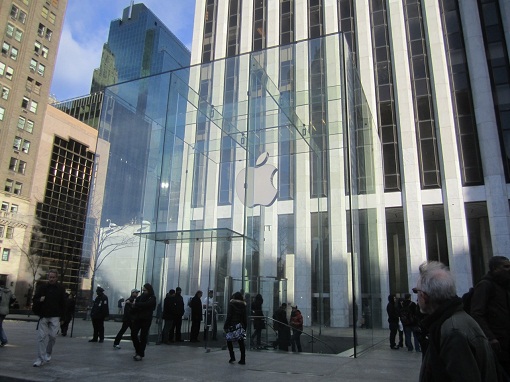 On the last day we made a final pilgrimage of sorts.  Up Fifth Avenue past St. Patrick’s Cathedral, symbol of the old religion, now showing its age and encased in scaffolding for major repairs.  Then it appeared before us, the Temple of the High Church of Apple, the gleaming glass cube that seems to defy all rules of architectural space.  We approached with awe.  I plucked my iPhone from my pocket and tapped on the map app.  There it was, the blinking blue dot, steady and true and finally home.