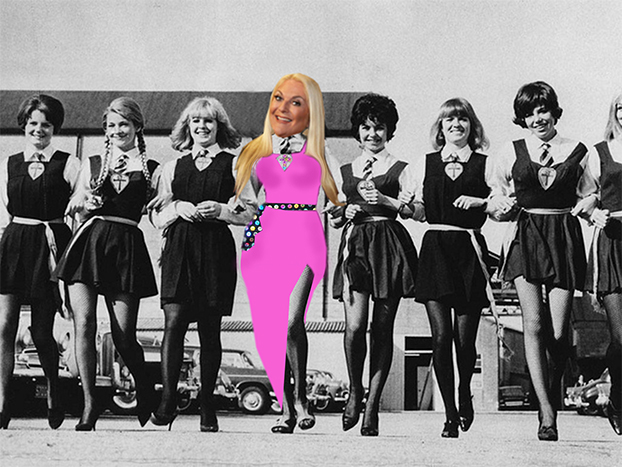 A couple of weeks ago an issue of Sunday Times Style Magazine appeared to be dedicated to the feminist cause. There was an article by Camilla Long on the relevance of feminism today, accompanied by comments from Caitlin Moran and a number of media-savvy younger women involved with female causes. At the end of her piece, Long quoted Whistles Chief Executive, Jane Shepherdson saying, “feminism is not about shaving under your arms, it is about being equal to men.”

The article was immediately followed by an advert for Thierry Mugler’s Angel Eau de Parfum, with Cindy Crawford lookalike Eva Mendes massively airbrushed into a Jessica-Rabbit style dress.  A few pages later came a feature on ‘screen idol vintage inspired fashion’ to ‘bring out your inner showgirl.’ Christopher Kane’s ‘ruffle corset dress,’ £2,395, Vivienne Westwood’s ‘jewelled corset,’ £2,400 and shorts £355, and Balenciaga’s pom-pom coat with knickers, total price £7,200 did little to dispel the notion that we (women) have barely progressed beyond the confines of our Victorian past.

It is very easy to be distracted when sitting in front of a computer. Once the inbox is opened, it throws up all sorts of unexpected temptations. One of these was a YouGov survey – thrillingly devised to arouse curiosity as to the questions. As it turned out, these related mainly to trust.  Okay, I thought, I may as well plonk down a few digital dots. Do I trust journalists? No. Do I trust BBC journalists? No. Do I trust ITN journalists? No. And so it went on – with teachers, police officers, MPs and other public servants all getting a look in.

After I’d done the survey, I started thinking about the questions. In fact, they should probably ask people to do a second survey a couple of hours later to see what the results are then. On the subject of journalists, I found myself wondering if there are any I do actually trust.  How about Jon Snow and Krishnan Guru-Murthy? I suppose I trust their reporting skills, but I probably wouldn’t trust them with my daughters (if I had any).  In fact, it was difficult to come up with any journalist I could trust… with the exception of Vanessa Feltz.

Sometimes, usually when driving, I tune into her show on BBC Radio London and never cease to be drawn in by her hypnotic and mellifluous voice. She stands out like a delicious fairy cake in a sea of turkey twizzlers. Here is a lady, all hair extensions and voluptuous curves, who speaks the Queen’s English beautifully, thinks on her feet (or in this case from her seat) – and whose range of vocabulary is a constant source of wonder.  Although I’ve never met her, Vanessa was a contemporary of mine at Cambridge, so must have been in one of the first intakes of women at a formerly all-male college.  She’s as bright as a button, she speaks commonsense and… Omg! Could this have the makings of an overgrown schoolgirl crush – whatever would Vanessa have to say about that?

Feltz came to mind when I visited Robina, a boutique in New Bond Street, for an event organized by the Lady Taverners. Today’s gowns are very unlike the first proper evening dress I purchased there, whilst I was still at Cambridge.  Mine was the simplest and tiniest of LBDs. But now, in a section of the street blighted by Crossrail construction works, bagged-up flounces of wedding wear (up to size 22) hang on dusty rails behind the store’s tired looking façade. Robina is closing down after 42 years of trading. I only went along because I felt nostalgic, and sorry for the owners. Though I ended up buying two long dresses I didn’t need – they were such a bargain it seemed silly not to. And at least it was near Mews of Mayfair, where I celebrated Pope Francis I’s election with my godmother over a glass of champagne, or five.

Never mind the recession… I read a Business of Fashion (BoF) blog post this week on the subject of Bond Street’s coming megastores.  A wave of new openings of larger-than-life luxury stores, “costing tens of millions of dollars each,” are going to be opened by Spring, 2014.  I had clean forgotten that, until relatively recently, Bond Street was closed on Saturday afternoons. Formerly known for its family owned antique shops and art dearlerships, the street will soon be filled with the vast, gleaming frontages of luxury brands like Chanel, Dior, Fendi, Ermengildo Zegna and Belstaff – all paying record breaking amounts per square foot. Louis Vuitton already has a flagship ‘maison’ in the street – described by (partly LVMH owned) BoF as, “a gilded emporium teeming with blue-chip contemporary art, a private VIP apartment, a concept bookstore and the constant sound of clinking champagne flutes.”  With the help of Crossrail and an influx of tourists from overseas, Bond Street is set to become a premier global destination for luxury shopping: “a super-scale showcase that can generate super-scale revenues…” A bit like Westfield, then, but without the parking.

Sometimes where the world is going scares me. But perhaps that’s being short-sighted? This is a concept social historian Carol Dyhouse considers in her latest book (launched today) – Girl Trouble: Panic and Progress in the History of Young Women. Popular hysteria has often accompanied the progress of girls over the past hundred years or so. Dyhouse’s fascinating study of the evolving opportunities and challenges for girls starts with the ‘white slave trade’ – an urban myth that kept young women imprisoned in their homes and oppressed. In the late 19th and early 20th centuries, white slavery became a synonym for prostitution and the sexual slavery that men subjected women to. Late Victorian moralists either saw girls as innocent or fallen.  Marriage was a sort of economic bargain, with the wife being kept in return for sexual services – rather like Doris in Mr Selfridge.

As soon as women tried to do something about their powerlessness, they became ‘revolting daughters’ and ‘rebel girls.’  But with the advent of better education, women grew more adventurous. The word ‘flapper’ originated for a slang term for young prostitute. The Girl Guide movement set out to lure aspiring flappers away from the “temptations of the eyebrow pencil, the lip salve, the rouge pot, young men and sex.”  By the 1930s, Hollywood screen goddesses provided the inspiration for women’s clothing and hairstyles – including revealing bathing suits. There were worries that girls, “seduced by their desire for luxury… might become restless gold-diggers, painted hussies… scornful of homely virtues.” There was even seen to be a link between confectionery and immorality – and buying sweets was associated with delinquency (at least for girls).

Things were different in Bohemian and literary circles, which were open to experimentation in sapphism and homosexuality. But the punishment for ‘good time girls’ was severe. Approved schools for girls attracted “a disproportionate amount of public interest” and girls tended to get into trouble not because of criminal activity, but because they were oversexed. These girls were generally highly intelligent, but seemed to spend an unusually large amount of time adorning their faces. “Criticism of young girls’ appearance, their hairstyles, make-up and mode of dress is common in post-1945 accounts of wayward girls,” says Dyhouse. She also points out anyone who googles ‘reform school girls,’ will probably discover a pornographic website.

Later on came the horrors of beat girls, dolly birds, mixed race dating, juke boxes, readily available contraception, the ‘permissive society’ and Essex girls. The various film versions of St Trinians (between 1954 and 2012) show increasingly sexualized versions of schoolgirls. Natasha Walter has written at length on a return to sexism in her book, Living Dolls. Yes, some women choose to have silicon implants, or frequent ‘thinspiration’ websites. But this obsession with our appearance is nothing new. Okay, ladettes can now compete with men in terms of bad behaviour. And our examination results are better than boys’. But, on the whole, we’re still partial to occasionally painting our nails.

Time has not made women equal. Men and women will always be fundamentally different because of our physical and psychological makeup.  And women’s love of fashion will continue to be inextricably linked to feminist issues.  “Do we need to see the colour pink as demeaning – or is the condemnation of girlishness in itself a subtle form of misogyny?” asks Dyhouse. I wonder what Vanessa thinks…