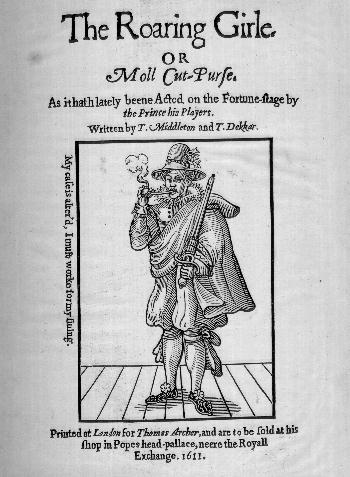 I took Maths O Level in late 1962 and passed. It was my last encounter with the subject. Only geography from which I was removed having managed to claim the wooden spoon three terms in a row, provided a shorter experience; and ‘science,’ education being as it then was, failed even to enter the picture. I mention this merely to note that on pondering the ‘Heroes of Slang’ I notice that I have adopted what might at best be termed a cavalier take on their numbering. There is an alternative: it is ‘innumerate’. There are two no. 10s, no sign whatsoever of 11 or 12, though Dickens pops up at this point and perhaps transcends mere numerology, no 20 and a pair of 18s. No-one, I tip the hat to your politeness, has complained. Perhaps no-one has noticed.

Still, it is time for another Hero. Or, I am pleased to say, Heroine: Mary Frith, who bestrode both criminal London and the stage as her alter ego: ‘Moll Cutpurse.’

Frith was born near Ludgate around 1584. Her first recorded appearance was, fittingly, in a court record, accused of stealing a purse. No verdict is recorded, but there were further court appearances, again for thefts, at all of which she managed to obtain a verdict of ‘not guilty’.  In 1612, however, her luck seems to have run out. Writing to his friend Sir Dudley Carleton on 12 February John Chamberlain told him how:

Mall Cut-purse a notorious bagage (that used to go in mans apparell and challenged the feild of divers gallants) was brought to [Paul’s Cross], where she wept bitterly and seemed very penitent, but yt is since doubted she was maudelin druncke, beeing discovered to have tipled of three quarts of sacke before she came to her penaunce.

The punishment was for wearing ‘indecent dress: which as Chamberlain  makes clear, referred to Frith’s frequent sporting of male clothing.

By then she was indeed notorious. In a male-dominated hierarchical society she had come to epitomize much that that world feared and thus condemned. Her cross-dressing was seen as undermining the established separation of genders, her frequenting of tobacco houses – the first woman recorded as so doing – and her boast that it was a lifetime’s consumption of the weed that had ensured her longevity, was similarly subversive: women should not smoke. In these contexts, modern studies of her life have claimed her as a proto-feminist. In addition there was her image as a 17th century ‘Moriarty’, controlling every aspect of contemporary crime. In her role as both receiver and broker of stolen goods she resembled her 18th century successor Jonathan Wild.  Thus the modern historian John McMullen:

She acquired some control over the organization of thieving… and established a warehouse to handle stolen property. Her subordinates were paid higher rates and worked mainly for her; she in turn returned the stolen goods to their owners. Her influence as a receiver and thief-taker was institutionalized. Her informers and accomplices advised her about robbers and pickpockets, and advertised her reputation. She cultivated specific crimes, instigating a lucrative trade in stealing and returning shopbooks and account ledgers that had specific value only to business owners. She established a market in high-value items such as personal jewels, rings, and watches. Her influence in the underworld stemmed from her power as defender of the public interest…she provided shape and discipline to thieving gangs and she expanded the frontiers of theft.

In 1614 Frith married one Lewknor Markham, probably son of the author Gervase Markham (apostrophised as ‘the earliest English hackney writer’). Predictably, she kept her maiden name and the marriage did not last. She established a fencing school, but this was probably a front and perhaps ‘fencing’ was a pun. In 1624 she was summoned before the Star Chamber: her crime an unpaid bill, but the evidence focussed on her subversiveness.  In 1644 she was listed among those recently discharged from Bethlem Hospital, better known as ‘Bedlam’; it appeared that at least for a while she had been considered mad. She died on July 26 1659. 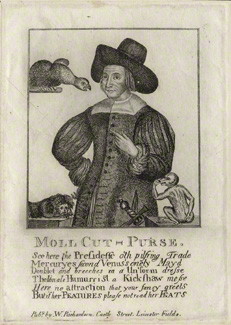 Frith became a symbol, as such celebrated and/or vilified in the contemporary media. There were verses (one by John Taylor) and pamphlets, but Frith’s finest hour came via the stage: Middleton and Dekker’s The Roaring Girle, or Moll Cutpurse, first performed in 1611. There was no pretence about the heroine’s identity and Frith, perhaps egged on by the playwrights for purposes of publicity, even appeared on stage at the Fortune Playhouse. She was dressed as a man and closed the evening’s performance with a jig. Critics have argued over the play: some see it as an early demonstration of feminism in action; others, given the final scenes in which ‘Moll’ is re-absorbed into law-abiding society, as a sell-out, a means of ensuring that the audience left the theatre in the comforting knowledge that all was right in the larger worlds and the underworld was no more real, let alone threatening, than a stage performance. More important here is Moll’s cheerful revelation of the supposedly secret language of the underworld, its cant.

In the first scene of Act V the Roaring Girl meets a fellow low-lifer, one Tearcat, and as her guests, a gaggle of aristocrats, look on, puts him through an interrogation:

Moll: And Tearcat, what are you? a wild rogue, and angler or a ruffler…?

Tearcat: Brother to this upright man, flesh and blood, ruffling Tearcat  is my name and a ruffler is my style, my profession.

Trapdoor: I have, by the salomon, a doxy that carries a kinchin mort in her slate at her back, besides my dell and my dainty wild dell, with all whom I’ll tumble this next darkmans in the strommel, and drink ben bouse, and eat a fat gruntling cheat, a cackling cheat and a quacking cheat…

All good stuff no doubt – no less than nineteen discrete cant terms in this brief example and the whole scene carries on in the same way – but it reads less like a feasible dialogue and more like a cursorily dramatized slang glossary, bereft only of alphabetical order and explanatory definitions. A set of on-stage aristocrats are initially appalled by the language: ‘The grating of ten new cart-wheeles,’ complains one, ‘and the gruntling of five hundred hogs comming [sic] from Rumford market, cannot make a worse noyse then this canting language does in my eares’, but distaste leads to fascination. It is likely that the off-stage audience were similarly fascinated and equally keen to learn.