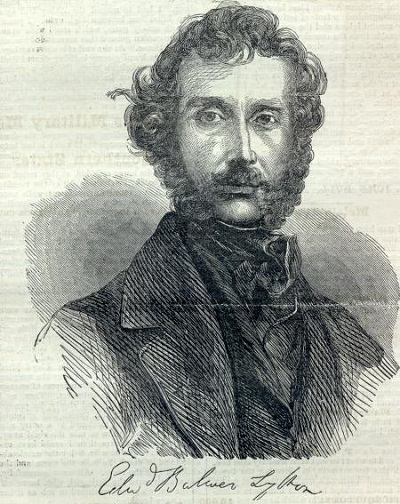 Edward Bulwer-Lytton, born in 1803, was a hugely successful novelist in his day, now all but forgotten and unread, remembered only for incidentals.

He coined the phrases ‘the Great Unwashed’ and ‘the almighty dollar’ as well as the proverbial ‘the pen is mightier than the sword’. He is also the man who persuaded Dickens (a friend) to revise the original ending of Great Expectations, bringing Pip and Estella together in a reader-friendly happy ending – and the originator of the ‘vril’ in Bovril (taken from his science-fiction novel, Vril, The Power Of The Coming Race).

And he came up with the famously ‘bad’ opening line (to a novel called Paul Clifford), ‘It was a dark and stormy night’. Actually there’s nothing wrong with that – it’s only as it painfully unfolds that the sentence reveals Bulwer-Lytton’s limitations as a prose stylist:

It was a dark and stormy night; the rain fell in torrents — except at occasional intervals, when it was checked by a violent gust of wind which swept up the streets (for it is in London that our scene lies), rattling along the housetops, and fiercely agitating the scanty flame of the lamps that struggled against the darkness.

That is bad writing at its baddest.

One of the strangest book finds of my life was of a Bulwer-Lytton. For reasons of research, I needed (or fancied I needed) one of his more obscure titles, Lucretia. This was back in the days before the internet, let alone AbeBooks or Gutenberg, and it proved impossible to track Lucretia down. Then, on a summer walk in rural Suffolk, I was passing a cottage when I noticed that a few tatty old books had been scattered on a small trestle outside, like so many unwanted vegetables, for anyone who cared to take them away. One of these volumes was a sturdily bound, if mouldering, copy of Lucretia. You could have knocked me down with the proverbial.

Naturally I took it away, then made the mistake of trying to read it. Twice I took a run at the opening chapter, but twice I was obliged to pull up halfway through. Bulwer-Lytton’s prose is of such peerless unreadability that the reader feels like one lost in a steamy jungle, hacking away with a machete in the fading hope of stumbling upon a clearing.

And yet this man was one of the top-selling authors of his day. It goes to show how, for the most part, the bestsellers of every age become unreadable to later generations (a heartening thought as one scans the bestseller shelves in W.H. Smith).

Truly, the past is another country; they read differently there.