If we listen at the tombs of the ancients what can we hear?

In the suburbs of the small town of Tarquinia in Northern Lazio there is a necropolis of the former Etruscan inhabitants. Etruscan necropolises vary in form depending on local custom, rock-type, age and so on. The necropolis at Cerveteri, for instance, is built to the plan of a city, with streets of monumental tombs in the form of round huts and terrace fronts, mirroring the town of the living. 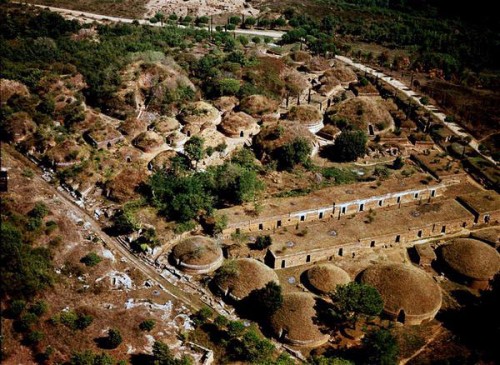 The Necropolis of Tarquinia, by contast, is an inverted city of the dead: single or multiple chambers are cut into the soft volcanic tufo rock and surmounted with tumuli; all that is visible of them so many hummocks on the level hillcrest, with their various concrete entry-ports. 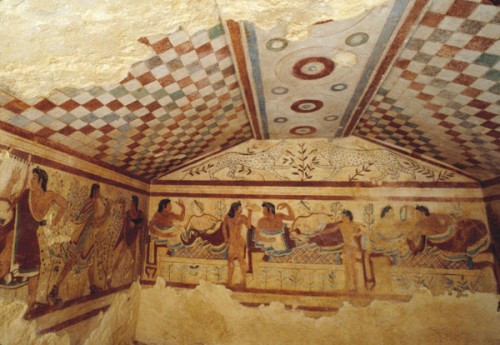 While the painting is both extraordinary and famous, Tarquinia is sufficiently out of the way that, on a weekday morning in February, say, there will be no one but you and a guard or two up there on the windy hill top.

The chambers are approached down steep passages, now cut with steps. You sit on the bottom step of a given tomb, the air heavy and musty and immobile, peering through the toughened glass that seals off the chamber, looking at these vivid scenes, and you rapidly become aware of the peculiar sensory profile of the experience; in particular, the odd acoustical properties of the tombs. The tombs are humid and still, but above all they are silent.

There is, as I recall, a very low hum of electrical circuitry – lights, which come on automatically as you approach, and dehumidifiers. There is the sound of your breathing, disconcertingly loud; and of your booming voice if you happen to speak. Other than that your ear drums are left to grope in the aural darkness.

There is a branch of archaeology called archaeoacoustics, which occupies itself with the aural world of antiquity. It is a minor branch, given that archaeology typically entertains itself with the material culture, but I like to suppose that it is actuated by important questions such as, did the armies of Alexander whistle as they marched? Or indeed, did the ancients whistle tunes at all?

One of the early stimuli in the field of archaeoacoustics was the claim made by Richard G. Woodbridge III in 1969, in an article in Proceedings of the Institute of Electrical and Electronics Engineers which referred to some subsequently unverified and unrepeated experimental success, that sounds of ancient life might have been encoded in artefacts such as pottery, through vibrations transmitted by the hands of the potter; or in the plaster of walls by plasterers. We might, with adequate technology, reconstitute the voice of Masaccio’s workmen, or the workshop chatter of Exekias, or, less ambitiously, the sound of a dog barking, or someone whistling.

In truth, it is much more likely that sounds are not accidentally encoded in this way. Recording to a soft medium demands a refinement of the means of inscription, in order both to amplify and clean the input – requires, in other words, proper technology and intent.

This not only makes me a little sad – most of what we do in life is, so to speak, a whistling of the spirit; it is not etched into the world, so much as vaguely doodled with a mental finger in the warm muddy canals of the brain – but also has implications for my magnum opus, the history of whistling, which seeks in part to recover what cannot ordinarily be recovered – the sound of ancient worlds.

In the tomb of the Leopards in Tarquinia, there is a pair of musicians, one playing a lyre and the other a double flute. 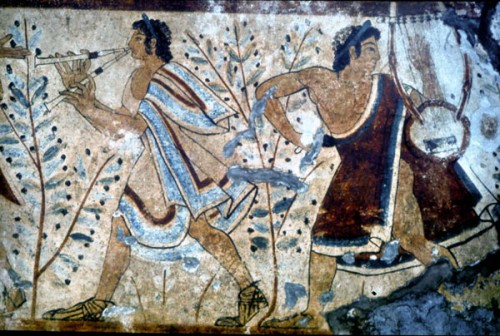 ‘Heard melodies are sweet, but those unheard/ are sweeter’ says Keats, musing on the acoustical properties of a Greek pot. Perhaps only to the more empirical mind, then, does the active, almost aggressive silence of the tombs at Tarquinia, seem disturbing. Tombs are meant to be quiet, of course, but in that silent dance with flute and lyre, in that most aurally undifferentiated of places, we are acutely aware that a whole dataset is now irrecoverable. All the soft matter of life, including, not incidentally, that of the tombs’ former inhabitants, and their whole intricate civilisation, has been entirely erased.

And who can say that this is not how the Etruscans represented death to themselves: as a silent town, as flutes played in a vacuum, as tantalising grapes; an exclusively visual world, then, unsupported by any sense of taste, smell or touch. Or hearing. Perhaps what they painted was not life-in-death, as D.H. Lawrence surmises, but life shorn of complex sensory interaction and dimension. A life, so to speak, unwhistled.