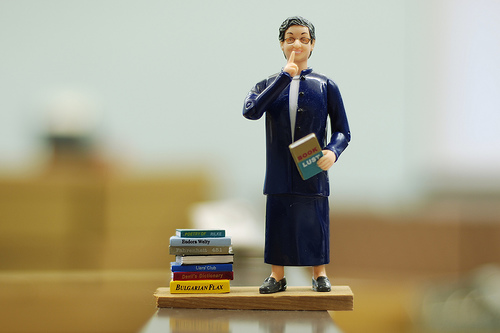 My favorite superhero is able to leap tall bookcases in a single bound!  It’s the Librarian action-figure sitting on my desk, finger raised in the shushing gesture that I’ve never seen performed by any actual librarian.  She is grimly bespectacled and wears the dowdy duds of the stereotypical librarian, a creature I have rarely seen though I labored in the library stacks for close to thirty years.  So her presence on my desk is ironic, a reminder that stereotypes will stubbornly endure, however many books of enlightened ideas we hurl at them.

The action-figure may be a parody, but real librarians do have a heroic role to play in American society.  American librarians are bound by a code of ethics, rather like the Hippocratic oath for medical professionals.  The heart of this code is the Freedom to Read Statement of the American Library Association (ALA).  I have a framed excerpt from the Statement sitting on my desk right beside my action-figure:

It is in the public interest for publishers and librarians to make available the widest diversity of views and expressions, including those which are unorthodox or unpopular with the majority.

What’s more, librarians are enjoined not just to make a diversity of views available, but also to take affirmative action against attempts at censorship.  Article 3 of the Library Bill of Rights states:

Libraries should challenge censorship in the fulfillment of their responsibility to provide information and enlightenment.

To this end the ALA’s Office for Intellectual Freedom collects reports from libraries and schools around the country, compiling a record of challenges and outright censorship that makes chilling reading.  In September of each year the ALA highlights this issue by celebrating Banned Books Week.  Perhaps celebrate is the wrong word.  Some literal minded library visitors do ask us why we support the idea of banning books!  What we are actually doing is documenting the fact that even in a supposedly enlightened democracy (can we in America still claim that?) there are constant, sometimes successful, attempts to suppress ideas.

During Banned Books Week libraries display books that have been challenged or banned along with materials explaining the circumstances and the specific objections.  Some of the titles are no surprise.  Everyone knows about Lady Chatterley’s Lover.  But the list reads like a catalogue of the classics: Huckleberry Finn, The Catcher in the Rye, Lord of the Flies, 1984, The Grapes of Wrath (a socialist tract that shows America in a negative light according to the would-be censors).  The most common objections are to sex and bad language, but other cultural hot button issues trigger the wrath of the censors. The children’s book Heather Has Two Mommies is often challenged for obvious reasons, but why would anyone want to ban Brown Bear, Brown Bear as the Texas Board of Education tried to do in 2010?  Well it turns out the author, Bill Martin, has the same name as an obscure Marxist theorist and no-one bothered to check if it was really the same person!  Brown Bear, Brown Bear happens to be my two-year-old grandson’s favorite book and I get a chuckle every time I read it, trying in vain to detect the insidious Marxist indoctrination I am inflicting on his impressionable mind.  Other objections are in the religious extremist realm: in 2001 a New Mexico church burned The Lord of the Rings and other Tolkien works because they believed them to be “satanic.”  Didn’t they get to the end, where the satanic figure of Sauron is defeated?

All across America vigilant librarians are standing up to the judgmental know-nothings who have elevated ignorance to a virtue.  They are defending democracy’s most important value – free access to ideas and information.  Sometimes these unsung heroes make the news.  In 2008 all eyes were on an obscure little Alaska town.  It turned out that when first elected mayor, the Scourge of Wasilla, Ms. Palin, interrogated the town librarian on her willingness to remove objectionable books from the collection.  The librarian refused and affirmed her commitment to the ALA Freedom to Read policy.  She was fired, ostensibly for “disloyalty.”  (I thought loyalty tests were a tool of totalitarian regimes).  But this tale of oppression has a happy ending.  The librarian was well liked and respected by Wasilla residents and the public outcry at her firing forced Mayor Palin to reinstate her.

I wanted to be a librarian ever since I was eight, making weekly visits to the local library on Chadwell Heath High Road to check out a new supply of Just William and Arthur Ransome books.  When I passed the 11 Plus I interviewed for a place at Brentwood Ursuline Convent School.  I was absolutely terrified of the severe, imposing nun who interviewed me.  The only question I can remember was the obvious “what do you want to be when you grow up?”  I answered unhesitatingly: “A librarian.”   She looked down her long patrician nose at me and grudgingly admitted: “Well, they can go quite far.”  She was no doubt referring to a far distance up the career ladder.  But now I think of her words as oddly prescient of how far I would travel geographically, to spend my life thousands of miles away in a foreign land.  But I did achieve my childhood dream and feel very lucky to have a career I love and one that I can say with pride makes a positive contribution to society.  Maybe my librarian superhero action-figure isn’t such an “ironic” statement after all.  The ultimate irony?  Fahrenheit 451 often makes an appearance on those banned books lists.

5 thoughts on “Librarians: the Unlikely Heroes of America”