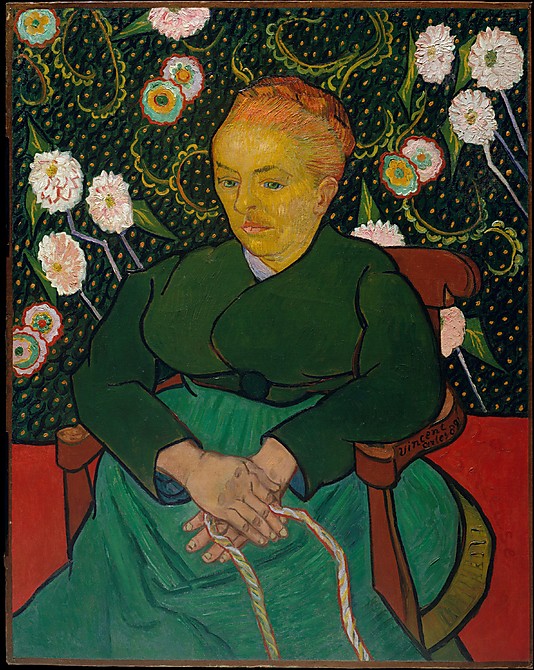 As the poignant letters of Vincent van Gogh reveal, a mother fixation became one of his great obsessions toward the end of his short life. A couple of years before his death in 1890 he painted a series of portraits of Augustine Roulin, the wife of a friend, and the best of the series, La Berceuse, shows this plump mother holding a cord, the other end of which is attached to a child’s rocking cradle. Within days of painting this domestic scene, van Gogh began self-mutilation and was hospitalized, where his obsession continued into delirium, singing the lullaby that he imagined Augustine sang as she tugged on the cord.

From one work of art to another. The D flat major Berceuse by Frederick Chopin was written in 1844 and stands today as one of the supreme masterpieces in the piano catalogue. Seemingly quite simple for most of its short duration it is, in fact, a set of variations, played out over a gently rocking left hand modulation which endures throughout. There is some turbulence near the end, but it concludes much as it began, in quiet contemplation and, for the child, a drift into slumber. So delicate is this filigree that only a pianist with supreme control and touch can hope to plumb the depths. Here, the eccentric Austrian Friedrich Gulda does just that whilst showing more than a passing interest in a rather beautiful girl in the audience.

Here’s a treat. For many, the greatest ballet score by Igor Stravinsky is the 1911 Firebird with a later revision in 1919. It was the work that brought his name to the world, and preceded by a few years the riot in Paris following the shabby first performance of the Rite of Spring. When we think of his great genius we imagine first, in our mind’s ear, the spiky, asymmetric rhythms and pounding bass; but he could beguile us with quietude too, and here is the old wizard in London in the mid-60’s conducting the Berceuse that leads into the final peroration, the plaintive bassoon melody weaving quiet magic. Old hands will recognize the marvellous New Philharmonia and their great leader Hugh Bean, as well as perhaps one of our greatest horn players, Alan Civil. What a band they were!

‘Are you sitting comfortably? Then I’ll begin’. So began Listen with Mother on the Light Programme at a quarter to two, just before Woman’s Hour. The music, probably the first ‘serious’ music I ever heard, became a fixture in those grey, far-off days. It was, as I now know, the Berceuse from the Dolly Suite by the woefully under-appreciated Gabriel Faure. His delicate art has never been popular, even in France, and in our world of instant gratification I doubt that it ever will be, but it represents human feeling at its warmest, most civilized, most private. Very much his own man, the Impressionist revolution of Debussy and others passed him by completely, and he remained with the cool beauty of his own very personal style, particularly the near-perfection of his keyboard writing.

Although the Norwegian Edvard Grieg is best known for the Peer Gynt Suites and of course that old war-horse the A minor Piano Concerto, he was essentially a miniaturist, the complexitites of sonata form suiting him not at all – and when he tried big, the seams started to show. But he possessed a conspicuous gift for melody, and this is no better expressed than in the various sets of Lyric Pieces for piano. I was fortunate enough to hear the great Odessan Emil Gilels in the 60’s and his playing of Brahms has remained a glowing memory. Gilels stumbled upon these rarely heard pieces quite late in his life and made a famous recording of an almost complete set. He is, for me and countless others, the only pianist in the world of these apparently facile studies, and here, from the Opus 38 set, is the painfully brief Berceuse, framed by the beautiful Arietta from Opus 12 and Butterfly (for Nige) from Opus 43. This group ends with the bleak Solitary Traveller.