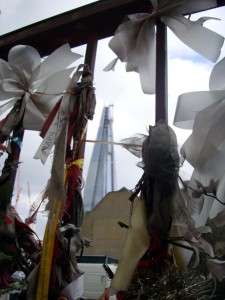 On your day to day travels about town, have you ever had an epiphanic moment – an instant when you’ve seen something as you’ve never seen it before? Bryan Appleyard writes about this in his book, The Brain is Wider than the Sky. He talks of the concept of ‘vuja de’ – when we notice something we may have seen or known, yet feel we are encountering for the first time. We gain a new perspective, a sudden flash of inspiration.

I had one of those moments the other day, when I parked my car in a narrow side street in Southwark. Ever since building started on The Shard, I’ve been taking regular photographs of its progress, from various vantage points – but mainly from Southwark Street, alongside Borough Market.

Then I saw The Shard as if for the first time, rising above a large rusting iron gate, which was completely covered in coloured ribbons, silk flowers, cuddly toys, beads and gaudily printed notes. 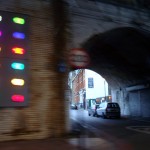 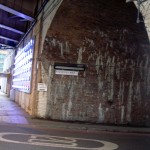 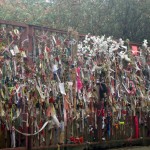 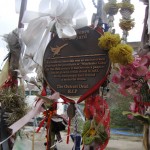 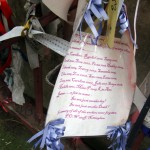 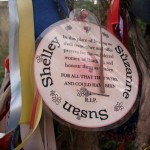 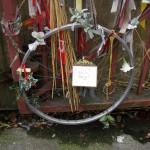 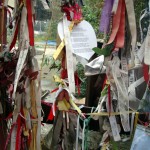 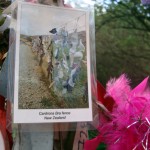 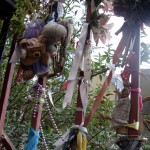 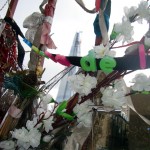 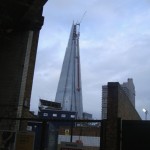 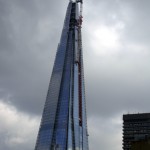 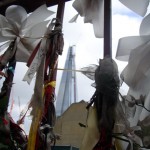 In medieval times this was an unconsecrated graveyard for prostitutes or ‘Winchester Geese’ By the 18th century it had become a paupers’ burial ground, which closed in 1853. Here, local people have created a memorial shrine. The Outcast Dead R.I.P

A quick search on the web showed that this is the site of the Cross Bones Graveyard. ‘Winchester Geese’ were prostitutes licensed by the Bishop of Winchester to ply their trade in Southwark’s Liberty of the Clink. And the 18th century paupers’ burial ground was known as The Mint, a notorious slum and thieves’ quarter.

London Underground dug up part of the site during the Jubilee Line Extension in the 1990s, removing some 148 skeletons. Then in 1996, a self-proclaimed urban shaman called John Crow began “channelling the spirit of The Goose at Cross Bones.” This was documented in a book, The Southwark Mysteries, penned by Crow’s alter-ego, John Constable. The shrine was established in 1998, when Southwark Mysteries staged the first Halloween of Cross Bones, a ritual honouring the outcast dead. The ribbons bear the names of people buried on the site.

The Friends of the Cross Bones have worked to influence the site owners, Transport for London (TfL), to rededicate part of the site as a garden of remembrance. Southwark Council funded the bronze plaque and ivy planters and pledged £100,000 from its Community Project bank towards a future garden. The northern part of the site is being used as a Thameslink works site and temporary car-park, fenced off from the old graveyard site to the south, which is already a wild garden.

However, the Cross Bones website explains that Drivers Jonas Deloitte, acting on behalf of TfL, are currently marketing the entire site as ‘Landmark Court’ for potential development from 2012. It adds that Cross Bones is estimated by the Museum of London to contain up to 15,000 burials, more than half of them children. And says, “we ask that any future developments should protect the graveyard area as a public park – the Cross Bones Garden of Remembrance – and maintain the gates in Redcross Way, which were long ago transformed into a people’s shrine.”

The Shard’s website bears the strapline ‘inspiring change.’ It’s as if the monumental landmark has become a 21st century Skylon – a futuristic, Utopian symbol – a gigantic boost to Britain’s skyline in a time of austerity.  Seeing the jumble of kitsch offerings on Cross Bones memorial gate, in the shadow of the towering metal and glass spike (that, to many, signifies progress), made me reflect on the important things at ground level. Things we would be ill-advised to overlook at any time: Our history, our heritage, and above all our fellow human beings.

13 thoughts on “Memorial Shrine in Shadow of The Shard”