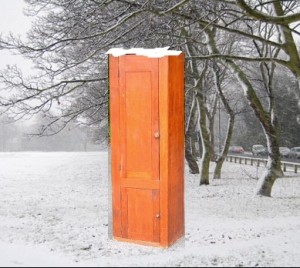 Although I rarely write about current affairs, either here at The Dabbler or over at Hooting Yard, I am an avid reader of the press, in both traditional and new media forms, and I like to keep abreast of what is going on in the world. For the final Key’s Cupboard of the year, then, here is my round-up of the most important stories of 2011, month by month, across the globe.

Curiously, however, in February, a scientist in the respected journal Slaves To Armok : God Of Blood (Dwarf Fortress) published his findings that “Africanized killer bees don’t exist yet”. Mister Always gave few – in fact, no – details of the methodology of his study, and perhaps it was best to take his conclusions with a pinch of salt.

One couple who will have quibbled with the science were Eric and Deborah Uneberg of Florida, who, in March, were beset by Africanized killer bees swarming around their house. 10,000 bees swarmed from a beehive in a live oak tree in the couple’s backyard in Summerfield when a pizza delivery man approached their home. There is no record of any comment from Mister Always, but nor has the identity of the pizza delivery man been confirmed. These are muddy waters.

Then, in April, it was reported that “a massive swarm of killer bees attacked several towns in Southern Texas, killing over two hundred people”.

As the Arab Spring gathered momentum, elsewhere things were quietening down. In May, for example, only three persons were killed in “an attack of furious bees” in Brazil.

In June, killer bees were discovered in Bainbridge.

Come August and killer bees had devised a new offensive weapon called “Pearson”. The morphology of this frightening development remained unclear, and there was still no sign either of Mister Always, nor of the Summerfield pizza delivery man.

It may have been the appearance of killer bees with added “Pearson” that led, in September, to Reed Booth, “the Killer Bee Guy” announcing that “hives are bigger and killer bees are meaner this year”. Mister Booth also offered the observation that “a thousand-pound pig is a huge thing”, and few of us would dare to contradict him.

In spite of all these important news stories, Call Of Duty MW3 correspondent “aixelsyd” felt able to ask, in October, “Where are the killer bees?” It is possible that “aixelsyd” is some kind of mangled anagram of “Mister Always”, still trying to claim the killer bees do not exist… yet.

One of the top stories in November was “dogs devastated by killer bees” in California. Poochophiles will be equally devastated to learn that one dog was dead and two others were clinging to life.

And bringing us up to date, in this very month of December, news came in that makes the whole “Pearson” hoo-hah pale by comparison. Killer bees, if I have read this correctly, are now at the controls of wolf-shooting aeroplanes.

In the light of that bombshell, it would be a brave soul who would predict what lies in store in 2012. Whatever happens, I wish all my readers a happy new, killer bee-free, year.