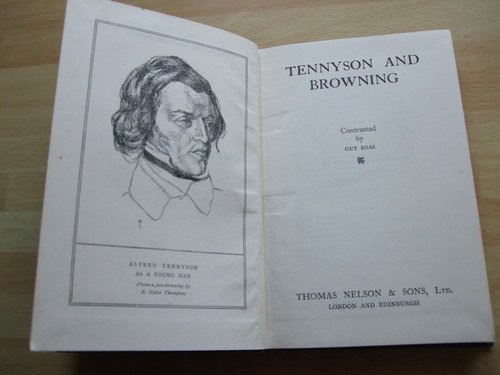 There were rather few volumes of poetry on the bookshelves of my childhood home – I remember an early Golden Treasury, a big Victorian edition of Longfellow with grandiose line engravings, an anthology of stirring verse for boys called Lyra Heroica (edited by W.E. Henley, author of Invictus, friend of RLS and peg-legged model for Long John Silver), and a small volume bound in blue cloth that probably had more effect on my embryonic taste in verse than any.

It was a joint anthology of Tennyson and Browning, ‘contrasted by Guy Boas’, who also supplies a slightly precious Introduction, beginning ‘To put a tiger-lily and a rose into the same vase does not make harmony, but it arrests attention…’

The collection, with fine frontispiece portraits of the two poets – Tennyson young and beardless, Browning with a chin pelmet of silky beard – was first published in 1925, but was clearly a big success, on its 17th printing by 1949, the date of my copy. I wonder if anyone reading this also has it? I have a friend who grew up with it in the house…

With the poems crammed tight into its 250-odd pages, Tennyson and Browning really is a very serviceable anthology of both poets’ work. As a child what I took from it was chiefly the bounce and excitement of the lighter Browning poems (the volume opens with How They Brought the Good News from Ghent to Aix) and the mighty music of Tennyson’s sonorous lines.

In fact, though many of the poems as a whole were then impenetrable to me – how could a child understand My Last Duchess or Andrea del Sarto, Oenone or Maud? – it was the music of both poets that came through and no doubt wove itself into the rhythms and cadences in my head.

That small volume also inspired in me a strange precocious obsession with In Memoriam, which I even attempted to learn by heart. When In Memoriam was first published, anonymously, one review was a particularly fine example of critical acumen: ‘These touching lines,’ the reviewer declared confidently, ‘evidently come from the full heart of the widow of a military man.’ Evidently.

8 thoughts on “Tennyson and Browning: ‘A Tiger-Lilly and a Rose’”