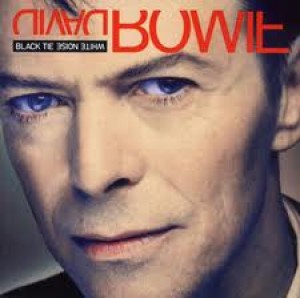 Daniel Kalder continues our Record Rehab series with another look at a Bowie relaunch album that failed to fire on all rockets.

Originally released in 1993, David Bowie’s Black Tie White Noise was the first of many albums he would drop over the next ten years that would each be hailed by critics as his “best since Scary Monsters.” In the case of BTWN it was at least true, but that isn’t setting the bar high as the records that had come between it and Scary Monsters had started with the merely passable Let’s Dance (3 entertaining pop singles) and ended with the Tin Machine live album Oy Vey Baby.

Ah, Tin Machine. However poor the music may have been, the project was a necessary repudiation of the Tonight/ Never Let Me Down 80s yuppie pop persona that had calcified around Bowie. Indeed, he was so sick of himself that he insisted he was just one of the guys, man, and just wanted to ROCK OUT with Iggy Pop’s old rhythm section. The only problem was that Tin Machine was a creative, critical and commercial catastrophe.

With Black Tie White Noise Bowie set out to reclaim both his name and his position in the upper echelons of the pop pyramid. Thus he reunited with Nile Rodgers, the uber-producer who had been behind his biggest hit, Let’s Dance. I recall press reports of a multi-album mega deal with Savage/BMI- Bowie was back, and he was going to be huge again! Only he wasn’t: the record swiftly went out of print and today is available for a mere 3.18 NEW on Amazon UK.

…better than 1p, I suppose, but cruel nonetheless.

Even back in 1993 when BTWN first came out I remember thinking that it was, well, not all that bad… in places anyway. I loved the lead single Jump They Say, which when relocated on the second side of a C90 mixtape of Bowie’s Station to Station through Scary Monsters output fit seamlessly. Then I kind of forgot about the album for the next 18 years, even though it ushered in the series of quite good albums he would make between BTWN and 2002’s Heathen, all of which I purchased and enjoyed. Recently however I was going through my CDs looking for something different to play in the car when I pulled out BTWN ….and it sounded, well, better than it had in 1993. Better than not all that bad, that’s for certain.

The record starts with The Wedding, an instrumental track Bowie composed for his (then recent) nuptials to Iman, the Somali super model. Instantly you can hear the slick, expensive Nile Rodgers production, but also something surprising. Over the heavy beats and the repetitive bass line what’s that? Why it’s the tinny house piano sound that was all over the place in the early 1990s. Hey, 46 year-old Bowie’s getting down with kids!

Indeed, I now learn that Bowie was trying to make a house record. I found this out on Wikipedia:

“We (Bowie and Nile Rodgers) both basically missed the same element, with what was happening with the new R&B, which is now hip-hop and house, and what we were missing was the strong melodic content that was apparent in the ’60’s. I wanted to see if we could establish a new kind of melodic form of house.

Hm. Well, it doesn’t sound anything like melodic house (M People, anyone?), but that’s undoubtedly for the best. I can hear a lot of the sounds from early 90s R&B, but something has gone wrong- in a good way- much as Bowie took the sounds of 70s German bands like Neu!, Kraftwerk and Cluster and synthesized them into something new and alien on Heroes and Low.

Indeed, the six tracks that follow The Wedding are difficult to categorize, though since this is a record review and a certain degree of naffness is customary in the genre I will indulge myself and call it a mutant strain of future-jazz- funk. First, there’s a weird, heavily processed track called You’ve Been Around which was co-written with Tin Machine’s guitarist Reeves Gabrels. It’s mainly a beat, synth noise and the sound of Bowie yowling about something or other. Next up is a radical cover of Cream’s I Feel Free which gives a good sense of the freedom Bowie and Rodgers felt in the studio. It’s slick, futuristic, funky, expensive-sounding and features Bowie’s old collaborator Mick Ronson on guitar, shortly before liver cancer propelled him into The Great Beyond:

Note that in the video that Bowie is prancing about with a saxophone. He used to do that a lot, especially in the 80s, even though the notion of Bowie as aspiring sax-man has largely been forgotten. He isn’t technically skilled so he forcefully rams avant-garde slow-motion blasts of sax noise into the track. Certainly nobody could work as a session player with such minimal chops, and had Rogers hired a professional the sax break would undoubtedly have sounded like the theme tune to LA Law. Thanks to Bowie’s willful amateurism however a strange, jarring element creeps into the slick production… which sits nicely alongside his weird, baritone crooning.

Next up is the titular track, a tolerable duet with some fellow called Al B. Sure! about the LA race riots. This is the “purest” R & B track on the record and Bowie’s weirdness advertent or otherwise is kept to a minimum. Indeed, it sounds as though he was reining it in for the sake of a hit. Didn’t work.

Attentive listeners/viewers who could be bothered to sit through the first 60 seconds of that track may have noticed something unusual- the introduction contained a short avant-jazz trumpet solo. This was played by the late Lester Bowie who made contributions to five tracks on the record; and indeed, the more I have listened to BTWN the more I have come to the conclusion that it is the interplay between that Bowie’s exceptional trumpet skills and the other Bowie’s improvisatory-compensatory crude sax weirdness that rescues this album from sounding like an uneasy artifact of its time and elevates it into something curious and wonderful.

After all, however extraordinary Bowie’s songwriting can be, his best records are defined by his collaborators who do so much to shape the sound. On Hunky Dory and Ziggy Stardust this was Mick Ronson; on Aladdin Sane Ronson was joined by the jazz pianist Mike Garson who transformed a bunch of rock tracks into something unique by sprinkling discordant piano notes all over the place. The Berlin era is defined by Eno’s synths and the ethereal/aggressive guitar work of Robert Fripp. Even Let’s Dance is elevated by the presence of Stevie Ray Vaughan. In all these cases however Bowie was sticking to instruments traditional in a rock format: guitar/piano/keyboards. On Black Tie White Noise his chosen soloist is an avant-garde jazz trumpeter- with assistance from his own sax, even though he can’t really play. And thus Nile Rodgers’ highly commercial instincts collide with Bowie’s surreal pop experimentalism repeatedly over the course of the album.

This fusion works best on the lead single Jump They Say. On the surface the track is funky, upbeat, heavily synthesized, a kind of happy Heroes. But wait… there’s more of Bowie’s weird, low crooning. And what’s that in the background? Why it’s more of his sax- really long squalls of it, just wailing away there. And what’s he singing about? Oh, his schizophrenic half brother Terry who killed himself and perhaps his own personal anxiety about mental illness… And look: the song just broke for some super-fast avant-garde jazz-squeaking and screeching on the trumpet!

The French New Wave style SF video is also interesting. There’s Bowie, in a suit, with a good haircut, back when he was one of the sharpest dressed men in showbiz. But something is wrong. He’s dancing on the edge of a building and singing about jumping. He looks a bit demented. His face is all bashed up. People are peering into cameras and telescopes and staring. The band is playing in a creepy, David Lynch style lounge. And then at the end, Bowie is lying all broken and twisted on top of a crushed car. People are gawping. People are touching him. Someone takes a photo. Guess he tossed himself off that building after all. His hair still looks good, though. (A few years later the same director, Mark Romanek, would direct a video bidding farewell to another legendary performer’s persona- Johnny Cash’s Hurt. But Cash actually died after that harrowing film. Bowie merely died his hair ginger and went techno.)

And remember- this was going to be Bowie’s big commercial comeback!

After this point, the record has some severe ups and downs. There’s an effective cover of Scott Walker’s song Nite Flights, which was itself heavily influenced by Bowie’s work on Low, and now gets re-Bowie-ised by the original influence. After that follows Pallas Athena, an ill-judged foray into club music, which was also written for his wedding according to Wikipedia… though that might be an instance of Internet sabotage considering how gratingly inappropriate the track sounds in that- and all other- contexts.

What used to be the second side of the album contains a truly awful song- the unspeakably sappy ballad Don’t Let Me Down & Down (it was the wife’s idea, apparently). Miracle Good Night is OK. Then Bowie covers another track influenced by his good self, namely Morrissey’s I Know It’s Gonna Happen Some Day, which has the exact same chord sequence as Rock and Roll Suicide from Ziggy Stardust and was even produced by Mick Ronson. It’s a far weaker song than the Scott Walker track and Bowie’s cover is forgettable.  In fact, I think most of the second side could be safely skipped were it not for the wonderful instrumental Looking for Lester. Here Bowie and Rodgers set up a crunchy R & B beat over which Lester Bowie blows a lot of notes. It’s great jazzy stuff which becomes absolutely hilarious when Bowie responds on his own horn with his usual blasts, parps and bleats. There’s really nothing like it. Imagine taking the post-apocalyptic sax noise Bowie emits on Neukoln (the penultimate track on “Heroes”) and dropping it right in the middle of an En Vogue backing track, where it has a punch up with bizarre trumpet shrieks. Yes friends, it’s that awesome:

BTWN bows out with a reprise of Bowie and Iman’s wedding theme, this time with added lyrics. I remember those nuptials, and the pictures in my mum’s Hello magazine. Iman looked like the most beautiful women on the planet. Bowie was positively ebullient. His old mum was beaming. Bono, Eno and Yoko Ono looked pretty cheerful too. And it would seem that the new energy Bowie derived from this happy union served him well right up until his emergency angioplasty in 2004. Since then he’s been mostly silent, which is a shame as 2003’s Reality was rubbish and I’d hate for it to be his last album. It followed a string of largely under-appreciated records, some of which may be ripe for reappraisal. Indeed, Outside- if you delete the irritating spoken word bits from your iPod- is a very strong release. But the creative rebirth started here, with Black Tie White Noise. It’s not a classic, but it’s definitely quite good, possibly even really quite good, maybe even better than that…. maybe. It deserves rehab, anyway. Enjoy!