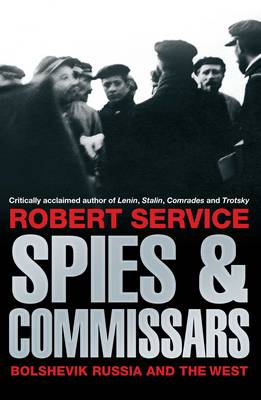 The title is somewhat deceptive: Spies and Commissars (Macmillan, 4 Nov 2011) isn’t a non-fiction thriller but rather an account of the West’s response to, and involvement with (or against) Soviet Russia, chiefly just after March 1917. The book may confuse the casual reader, since Service isn’t providing a comprehensive, blow-by-blow account of the revolution and after. If, however, one already has some basic knowledge of events and players, it is an engaging and worthwhile read, solid and diverting. There are judicious descriptions of, for example, Lenin:

Lenin was shortish, pedantic and impatient. With his thumbs tucked into his waistcoat, he seemed at times like an angry Sunday preacher. He gave the impression that there was only one answer – his answer – to any complicated question.

Any book about Soviet Russia must address both the power of ideas, in their mass effect; and the singularity of men & women. Service has a novelist’s eye for the individual; and for the peculiar power of peculiar people – for one of the greatest and most extensive tyrannies in human history was initiated by a very small number of idealist oddbods. At the time the new order must have seemed exceedingly precarious; so of early 1918 Services writes:

They could not know how long they would last in power. They and their families were aware that danger could be in store for them in Petrograd. Bolshevik leaders joked that they kept their suitcases packed for fear that they might suddenly have to flee.

In retrospect, Soviet Russia seems monolithic and so (perhaps) inevitable. It was, rather, a close thing, with civil wars following the initial revolution, and always the possibility of direct Western intervention. An idea became political reality in 1917 – and like a new virus, it had to spread to survive; it was held with Messianic passion by its adherents, and as vehemently feared by its opponents. Thus of German POWs returning from the East:

Nor was the German high command enthusiastic about using them as soldiers until all traces of Bolshevik influence had been removed. The Austrian commanders were still more worried about the contaminating effects of communism.

The Bolsheviks assumed their idea would naturally spread, and much of their foreign policy was dicated by the expectation of revolution in Germany and beyond. Then, the workers’ paradise, the perfect earthly Jerusalem:

The dictatorial structure would only be temporary. It would establish a socialist order enshrining the principle of ‘an equal amount of products for an equal amount of labour’. As support grew throughout society, the reliance on force would steadily decrease. A second stage would then begin that would be the ultimate stage in human history: communism. No compulsion at all would be required in communist society. There would be no army, no bureaucracy and no state. Social classes would disappear. Life would proceed on lines set up by the people of the entire world with the common good in mind.

An intoxicating idea, if rather hazy on details and the reality of human psychology. As Service shows, this idea spread like a virus, but the matter was neither smooth nor historically inevitable. It could have been killed at birth:

…there is some evidence that officers of the British Secret Service Bureau decided that something should be done to get rid of him [Stalin]. One of their number, Stephen Alley, later claimed that he had been asked to find a pretext for an interview with Stalin. Once inside Stalin’s office, Alley was to assassinate him. Alley was a brave patriot but saw that any such exploit would end in his own death even if he succeeded in killing Stalin. He therefore rejected the proposal. (Only in retrospect was it possible for him to appreciate how much he would have benefited the world if he had snuffed out the life of one of the twentieth century’s greatest mass murderers.)

The excitement of Service’s book comes from such moments, when one realises the volatility and fragility of early Soviet Russia, that so much was determined by so few. Thus the book is replete with curious anecdotes and curious personages, such as agent Paul Dukes, recruited in Mansfield Cumming’s office, July 1918:

One may be forgiven for wondering that British intelligence should so closely resemble a scene from the Hooting Yard. But these were the times. Much was decided by eccentrics, fanatics, visionaries, and out-and-out lunatics of one kind of another. Of Paul Dukes:

…it would seem that he personally rescued two of the former emperor’s nieces, making himself into a human bridge across a dyke at one point. A couple of Englishwomen also owed their lives to him, as did a merchant called Solatin who had tumbled from wealth and influence to destitution after 1917. Duke and his couriers ran fearful risks – at least one of them was trapped and shot by the Cheka. He was once pursued so hotly that he hid in a tomb in a graveyard. The sight of him emerging from it next morning terrified a passer-by.

There is something very human, if often prickly and alarming, about the actors in this early drama (at least compared to the high days of Stalin’s purges, with Yezhov, Yagoda, Beria). So, a telling scene with Trotsky and Charles Adolphe Faux-Pas Bidet, the latter having “helped to expel Trotsky from France in 1916”:

He [Bidet] was therefore a marked man when undertaking a mission to Russia in 1918 and was swiftly arrested. Trotsky enjoyed the opportunity of interrogating him, using sarcasm rather than threats against his former tormentor.

Not quite the Lubyanka, yet. The individual is still vital in these early days, the State not yet the fully established monolith of torture and murder and propaganda.

Service manages a balance between great events and oddbods; one feels how much was decided by eccentrics, by men with coloured bottles on their desks. So Trotsky, remarking on Clare Sheridan’s bust of Asquith, half-jokily threatens to use her a hostage if her old subject should ever return to power:

Sheridan responded that her cousin Winston [Churchill] was more likely to form any new government; she also told him: ‘But if you said you would shoot me, Winston would only say “shoot”…Winston is the only man in England who is made of the stuff that the Bolsheviks are made of. He has fight, force, and fanaticism.

And in the end, for all the grand historical sweep of events and armies, things were determined by such men.

4 thoughts on “Book Review: Spies and Commissars by Robert Service”