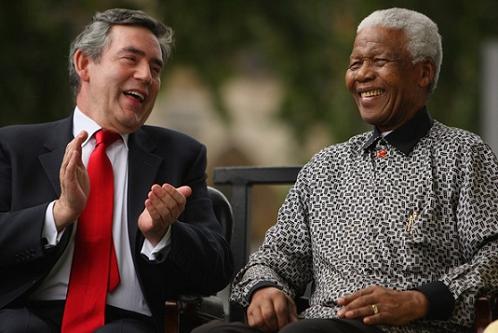 Nige examines a 19th Century poem that has experienced a sudden revival in popularity, having been cited as an inspiration by both Nelson Mandela and, um, Gordon Brown…

My father’s taste in poetry was that of an upright Edwardian. He had a personal anthology of poems of moral uplift and patriotic heroism which he delighted in reciting while shaving. Vitai Lampada was of course a favourite, as were The Revenge (‘Sink me the ship, Master Gunner – sink her, split her in twain! Fall into the hands of God, not into the hands of Spain!’), The Loss of the Birkenhead and Horatius at the Bridge (‘even the ranks of Tuscany could scarce forbear to cheer’).

These kind of poems were still to be found in the older anthologies of my childhood, but were soon to fade away… Or were they? The sudden vogue of W.E. Henley’s Invictus suggests some at least of these poems have a long afterlife and are liable to flare into renewed vigour and popularity even now. Invictus gave its name to the 2009 Clint Eastwood film about Nelson Mandela, just as the poem, on a scrap of paper, gave strength to the prisoner Mandela.

John McCain claimed the poem as a source of personal inspiration – as did (gawd help us) Gordon Brown. Why is this? It is a very effective poem of its type, technically well done, full of memorable phrases, with a message that I suspect bordered on the subversive when it was published (1875) since it proclaimed man free from God (gods now plural and dubious), in control of his own destiny and fearing no afterlife or judgment.

Now, however, it is one that stiffens the sinews of the individualist captain of his soul, at best in a way that will strengthen a good man (Mandela), at worst as a kind of archaic equivalent of My Way (Gordon Brown). Either way, it seems it’s back. For a while.

Out of the night that covers me,
Black as the Pit from pole to pole,
I thank whatever gods may be
For my unconquerable soul.

In the fell clutch of circumstance
I have not winced nor cried aloud.
Under the bludgeonings of chance
My head is bloody, but unbowed.

Beyond this place of wrath and tears
Looms but the Horror of the shade,
And yet the menace of the years
Finds, and shall find, me unafraid.

It matters not how strait the gate,
How charged with punishments the scroll.
I am the master of my fate:
I am the captain of my soul.