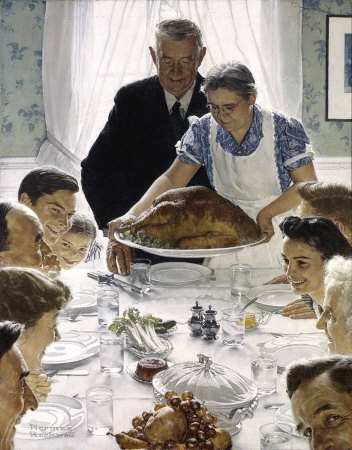 Rita compares the American and British approaches to celebrating in November…

One of the oddest questions I’ve been asked since moving to the U.S. is “Do you celebrate Thanksgiving in England?” I resisted the temptation to answer “Yes, we celebrate that the Puritans left and took their repressive ban on dancing and merriment with them!”

More tactfully I said “No, but we have our own November holiday, Guy Fawkes Day.” That met with blank stares. So I explained that Guy Fawkes was a guy who plotted to blow up King James and the Houses of Parliament in 1605. “You mean you have a day to celebrate a domestic terrorist?” “No, no” I hastily corrected. “We burn him in effigy to celebrate the fact that he was captured and gruesomely executed.” It really wasn’t all so merry in Merrie Olde England.

During my childhood the Fifth of November didn’t have much to do with history any more. It was just a chance to light a big bonfire, set off fireworks, and eat toffee. To discover the real story of Guy Fawkes there is no better account than Antonia Fraser’s Faith and Treason: The Story of the Gunpowder Plot. As well as telling a gripping tale, this book demystifies the tangled politics and religious conflicts that the Puritans left behind when they set sail for the New World.

The modern American Thanksgiving also seems far removed from its historical origins. The oft-told story of the pilgrims, the Native Americans, and their feast of wild turkey and trimmings is a powerful myth with little more substance than the cardboard cutout figures American children create in nursery school at this time of year. The real history behind the myth is told in Mayflower: A Story of Courage, Community, and War by Nathaniel Philbrick. The truth is they didn’t really eat turkey and they weren’t really Puritans, but a different separatist group who thought the Puritans were a bit too liberal. And the peaceful coexistence between Europeans and Native Americans symbolized by that feast later exploded into a brutal war.

But despite the faux nature of the celebration I’ve come to love the Thanksgiving holiday and even conquer my initial suspicions of pumpkin pie (a dessert made with a vegetable?) The day isn’t really about history, or pilgrims, or the founding of a nation. It’s about the importance of family. For better or worse American extended families gather for a meal, perhaps the only one they will share all year, a meal that feels like a sacred ritual, but one that everyone, regardless of religion or cultural background, can fully embrace. And for that we can all give thanks.

16 thoughts on “Of Holidays and History: Guy Fawkes versus Thanksgiving”