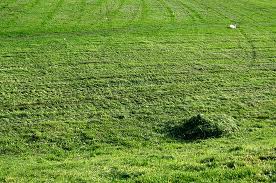 Here’s a nice piece by Joe Moran on mowing lawns. Not that anyone’s been able to do much mowing recently – I’d probably have to have resort to a machete to get near our patch of grass, subsumed as it is by sub-tropical undergrowth. Good growing weather, see.

Anyhow, Mr Moran thinks that for ecological reasons we may be witnessing the demise of the British lawn (yes, I know). However, if it is happening, I’d put the decline of lawns down to a desire for convenience. Two of my friends, both incidentally (or not) City lawyers have replaced the grass in their modest London gardens with astroturf. It’s not that appalling. Apart from it meaning no more mowing and no more watering – their lawns are now always neatly cropped and vividly green – the stuff is also surprisingly pleasant to walk on with bare feet, especially when wet. A bit like a gently exfoliating foot scrub.

Mr Moran refers to the poetry of the soon-to-be-obsolescent lawnmower and quotes a line of Larkin’s from Cut Grass. Here it is in full:

It dies in the white hours
Of young-leafed June
With chestnut flowers,
With hedges snowlike strewn,

Cheery stuff. But has anything ever written captured the full redolence of the smell of cut grass? There is an RS Thomas poem that puts it in some sort of intellectual context, though, as you might expect, we are talking hay rather than grass cuttings (much posher). It’s also served me over the years as a back-of-the-mind justification for not doing indoors work when the weather’s nice.

The Earth Does Its Best For Him

The paintings are under glass,
or in dry rooms it is difficult
to breathe in; they are tired
of returning the hard stare
of eyes. The sculptures are smooth
from familiarity. There is a smell
of dust, the precipitation
of culture from dead skies.

I return to Lleyn,
repository of the condescension
of time. Through the car’s
open windows the scent of hay
comes. It is incense, the seasonally
renewed offering of the live earth.

But, for me, this is the one – by a light-hearted and lyrical Ted Hughes:

The grass is happy
To run like the sea, to be glossed like a mink’s fur
By polishing wind.
Her heart is the weather.
She loves nobody
Least of all the farmer who leans on the gate.

The grass is happy
When the June sun roasts the foxgloves in the hedges.
She comes into her flower.
She lifts her skirts.
It does not concern her
The pondering farmer has begun to hope.

The grass is happy to open her scents, like a dress, through the county,
Drugging light hearts
To heavy betrothals
And next April’s fools,
While pensioners puzzle where life went so airily.

The grass is happy
When the spinner tumbles her, she silvers and she sweetens
Plain as a castle.
The hare looks for home
And the dusty farmer
For a hand-shaped cloud and a yellow evening.

Happy the grass
To be wooed by the farmer, who wins her and brings her to church in her beauty,
Bride of the Island.
Luckless the long-drawn
Aeons of Eden
Before he came to mow.