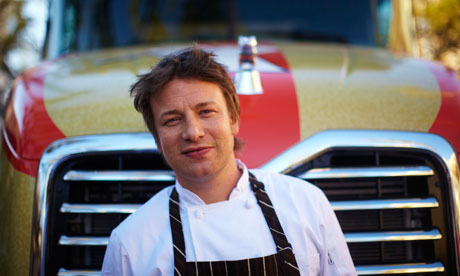 It’s been 15 years since Jamie Oliver slid down a spiral banister and into our lives, and whilst he remains the same old scooter riding Peter Pan, decked out in his Kevin the Teenager garb, Jamie PLC has been busy carving out a serious business empire – what with the magazine, the stolidly suburban restaurant chain, (currently raising funding to launch 30 branches across Asia), the home shopping network, the Fifteen project and his TV production company (last seen attempting to foist the cloyingly indigestible Sophie Dahl upon the nation) And let’s not even get started on Jamie’s Dream School…(reviewed excellently by Brit here).

Since annoying every schoolchild in the country by removing the only tasty things on their lunch menus, Jamie has now decided to bring his puritanical powers to bear upon the Yanks in his never-ending quest for world domination. The first foray stateside two years ago basically ended in Oliver being run out of town; despite winning an Emmy award for the show, the deep-fried Deep South town he’d chosen to enlighten remained stoutly unconverted, so this time he’s picked on Los Angeles, probably because he thought the cultist Californians would be easier to persuade, and probably because he wouldn’t mind living there.

The show finds Jamie attempting to gain access to the progressive West Adams High School, run by another Jamie dude who also looks like he goes to the shops on his scooter. The two immediately set up a smouldering bromance and compete to see whose hair can be scruffier. Unfortunately the LA school board aren’t impressed with Jamie’s hair, and worry that he’ll make them look like wallies, so they deny him access to every school canteen in the entire district. Thus forced onto the back foot and deprived of his initial angle of attack, Jamie desperately roots around trying to fill 5 hours of programming, which is made harder by the fact that there’s not a single recipe featured in the entire show.

Various fast food vendors and fat families are wheeled on for our prurient disapproval. They all seem to be nice people, but we are left in no doubt that they are very bad. The only way for them to absolve themselves is by listening to Jamie, agreeing with Jamie and then crying and hugging Jamie. This happens a lot. This is where Oliver’s ostensibly admirable crusade starts to get odd. The show is obviously edited crudely for the purpose of evangelisation, but it has the effect of making Jamie appear to have a bit of a messiah complex.  Every couple of minutes we see a fat person cry out “You’re so RIGHT, Jamie!” before they appear in an infomercial-style  studio shot proclaiming what a great guy Jamie is and how they have seen the light and been saved Alleluia! This is then followed by a head shot of Jamie agreeing with himself. Considering Oliver produces the programme it feels a bit creepy, and coupled with his intensely annoying habit of doing gangsta handshakes and calling everybody ‘bruvva’, it makes for sickeningly saccharine viewing. American viewers must have agreed as the show was cancelled half way through the run due to poor ratings; the fact that there’s only 5 episodes and that it has had a relatively subdued advertising push in the UK gives every impression that this was not Jamie’s finest hour.