According to recent studies, arguing on the internet is now the second most popular leisure activity in the world, just below shopping and just above sex. But how many of those who spend half their lives debating God versus Atheism or Climate Change on a message board or blog really know how to win those arguments?

Now, for the first time, anonymous internet guru Noseybonk reveals the ploys, tactics and strategems of Blogmanship: the art of winning arguments on the internet without really knowing what you are talking about.

All this week, The Dabbler will be publishing exclusive extracts from new handbook The Theory and Practice of  Blogmanship, which is now available as an eBook from Amazon or as a PDF here. In the first part, Noseybonk explains the general principles and aims of the blogman, before moving on to more practical tips tomorrow…

Blogmanship Part 1 — The Blogman and his Aims

“They [like]…. to argue…”
Travels with Mbutu – Up the Amazon by Paddleboat with Observations on the Customs and Manners of the Peoples Encountered There by A.O.E Stanhope (1844)

What is a blogman?
You, me, him, her*, everyone. That is the answer. And it is a good answer, for we are all blogmen who post a comment on an internet thread or forum in a spirit of argument or debate, be the subject Religion versus Atheism; Tories versus Labour or simply the best way to make an omelette.

But there is another answer, which is that the Blogman Proper, accredited and qualified, is one who wishes to succeed in these internet debates; who clearly identifies a measure for this success; and who in pursuit of it applies a methodology founded on the principles of Blogmanship.

At this point the layman may be thinking: ‘identifies a measure for success’ in an internet debate? Surely that is obvious enough: one succeeds by providing a superior argument to one’s opponent, so that he admits his position to be the weaker and stands corrected.’

The layman may well think this; not so the blogman. For the blogman is, above all else, a realist about the human character. Internet commenters willing to admit themselves bested in an argument are so rare as to make hens’ teeth seem like Starbucks coffee shops. On even the plainest matters of apparent fact – such as whether Elvis or the Beatles had the most hit records – it is near-impossible to force a good blogman to admit his error (see section Factual Corrections, Squirming out of); so imagine the difficulties of such intractable and emotive subjects as Darwinian evolution or Manchester United.

The Blogman understands this; he may not like it particularly, but he accepts it and he works with it. Which preamble brings us to a founding principle of Blogmanship:

DEFEAT IS NEVER ADMITTED, BUT MAY BE IMPLIED

…since nearly all blog comment threads end not in a clear victory for one party or another, but invariably peter out into a tangled and ill-tempered stalemate.

Example
At this juncture an illustration might assist. Consider this exchange on an ordinary blog, comments unmoderated, between a layman and a blogman. The subject is simple enough: Does God exist? In this example the blogman is taking the role of Believer against the atheist layman.

LAYMAN:  Of course God doesn’t exist. Why does your God allow children to be murdered and earthquakes to wipe out whole populations?
BLOGMAN: I must say, you seem rather angry at this God whom you don’t believe exists.
LAYMAN: I’m angry that you think I should worship a God who, if He exists, must hate me and be evil.
BLOGMAN: Perhaps it’s not necessarily all about you?

Observe the blogman’s craft. Has the question of God’s existence or otherwise been satisfactorily resolved? It has not. Has the blogman even directly addressed the opening question? Again, no. All we have is a series of general remarks and an inconclusive stalemate. And yet, to all objective readers, it will be quite clear that the blogman – cool, good-humoured and patronising – has emerged ‘one up’. His opponent, meanwhile, will feel that something somewhere has gone wrong, that he has lost control of the battle, or that he is somehow being poked fun at.

For here is the crucial insight of Blogmanship:

THE GOOD BLOGMAN WINS THE STALEMATE.

The blogman’s skill is to create the impression that his intellect is vastly superior to that of his opponent, without getting into the awkward (and dangerous) business of actual reasoned debate. 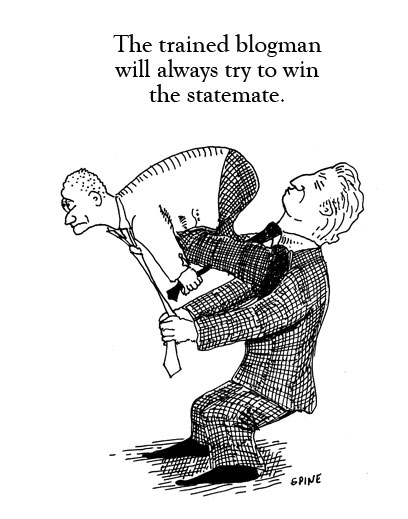 Two secondary but important principles
This brings us on to another pair of fundamentals:

THE BLOGMAN KNOWS HOW TO PLAY THE MAN, NOT THE BALL.

because when an objective conclusion is impossible, the loser is the one who looks most foolish by this becoming apparent. However, crucially, we must remember that:

THE GOOD BLOGMAN IS A GOOD GENTLEMAN.

There are many tools in the blogman’s box, but crudeness, profanity and childish namecalling are not amongst them. Such primitive weapons inevitably backfire and are tantamount to admitting defeat, something a true blogman will never do.

The blogman’s basic tools: Condescension and Flattery
So much for the general principles and aims of Blogmanship. Now we come to matters practical: the methods, the tactics, or, as the terminology has it, the ploys of the artful blogman.

The most basic tools in the blogman’s box – the hammer and the screwdriver of Blogmanship, if you will – are Condescension and Flattery. The two often go hand-in-hand and the practised blogman will weave both effortlessly into even the briefest comments.

The serious student is well-advised to spend a few hours a day reading but not commenting at such renowned blogman haunts as The Spectator’s ‘Coffee House’ or James Delingpole’s blog in The Telegraph, where he will observe both tools employed with frequency and skill. In the meantime, it will be a useful primer to commit to memory the following phrases, which the National Society of Blogmen Handbook 2006 listed as ‘Five Tried-and-Tested One-Liners for Undermining an Earnest Opponent’:

(TIP: although these ploys can be used in almost any kind of debate, the novice may wish to try them first in a simple question, such as whether euthanasia should be legalised)

1)      Nearly everyone gets this one wrong, but you’ve argued it a hell of a lot better than most.
2)      That’s certainly how a lot of very smart people used to think – you’ve done well to get there on your own.
3)      Clever… if I started from where you did, I’d probably end up there too.
4)      Your enthusiasm does you great credit. I wish I still saw the world like that.
5)      You’re damned close to a profound insight there.

Non-sequiturship: The Basic Stopper
Condescensionship and flatteryplay are the blogman’s bread-and-butter and can be dropped lightly into almost any thread to create the conditions in which the Stalemate can be won. But there are occasions when a blunter instrument is called for, and here the blogman will wish to employ a Stopper.

Non-sequiturs may be the logician’s enemy but, used correctly, they are the blogman’s friend. Nothing can bring a free-flowing opponent to a halt more effectively than a simple comment entirely devoid of relevance but loaded with superiority.

Try dropping something like this into a debate about the causes of climate change: “I met a college professor once. Spent his whole life hammering ideas to bits… but he never could put the pieces back together.” Pound to a penny you’ll be pleasantly surprised with the results.

Originality and off-the-cuff creativity are to be encouraged in non-sequiturship (thus the Science of Blogmanship becomes an Art), but the purpose is universal: to throw your opponent off his stride by insinuating that you understand his argument better than he does, have seen it a million times before and that it is beneath your dignity to address it directly.

Very often a standard proverb, given a little twist, is all you need. J.D Oddlethorpe consistently made inroads with his ‘root of all evil’ gambits, most famously winning a long stalemate concerning the legality of the Iraq invasion with the brilliantly meaningless:  “Contiguous reasoning is the root of all evil”.

Non-sequiturship: A note of caution
Do not over-use the non-sequitur, or suspicions will be aroused. Once per thread is more than sufficient. The wise blogman sails close to the wind of outright twaddle, but never poops his jib.

Beware, also, when using non-sequitur ploys on other blogmen, for there is an easy counter:

COMMENTER: It’s been consistently shown that right-wing Christians are more generous than left-wing urbanites when it comes to charitable giving.

BLOGMAN (seeking to stop thread with non-sequitur ploy): Consumer research is the opium of the people.

COUNTER-BLOGMAN: Ah, but you would say that, wouldn’t you?

Montgomerie’s Meta-Stopper
Blogmanship scholars have produced volumes on the various counters and counter-counters to non-sequiturship, and will doubtless produces volumes more, the subject being still in its infancy.

However, the great blogman  E.F.P Montgomerie (who argues under names including Oldsod and Mosky Toe (both good blogman names – see Leyland-Williams’ authorative work Pseudonymship (2006) for more in this area)), claims, not without some justification, that in an emergency virtually any thread can be instantly stopped, without fear of counter, with the simple phrase:

I wondered when somebody was going to say that.

Ofcourseplay
Few indeed are the comments that can’t be instantly imbued with intimidating gravitas by the insertion of the phrase ‘of course’.  Montgomerie, of  Meta-Stopper fame, was also a pioneer in field of ofcourseplay, but it was the brilliant ofcourseman B. Grapplehard who first conceived the formula:

THE MORE PREPOSTEROUS THE STATEMENT, THE MORE EFFECTIVE THE ‘OF COURSE’.

Nobody who witnessed his bravura comment of March 2003, “The only thing Jane Austen couldn’t do, of course, was social observation” will forget it in a hurry.

COMING UP TOMORROW: More matters practical from the Blogman’s toolbox, including logicship and aggressive book recommending. Then on Wednesday – Special relationshipmanship (how Britons and Americans can annoy each other online)…

The full Blogmanship handbook, packed full of useful tips for comment-thread glory not included in this serialisation, is available to buy now:

32 thoughts on “Blogmanship: How To Win Arguments On The Internet Without Really Knowing What You Are Talking About”