In the fourth extract from our serialisation of Blogmanship (available to buy here), Noseybonk looks at some of the advanced techniques of winning internet arguments, including a methodology for squirming out of argyments you have clearly lost…

“Gras-tyme is doon, my fodder is now forage.”
Chaucer – The Canterbury Tales, The Reeve’s Prologue

‘Above the fray’ play
Once the novice blogman has grasped the fundamentals of condescensionplay and non-sequiturcraft (see excerpt 1) but not before then, he may attempt to proceed to the next level. The cultivation of a persona that appears, at all times, to be rather above this sort of thing is what enables a blogman to win a clear solo victory in a thread contested by dozens or even scores of laymen.

I contend that a consistent facility with abovethefraymanship is what separates the serious blogman from the mere dabbler (both Smythe-Hurst and Grapplehard concur on this point). Again, this guide can only provide the shallowest introduction, since getting ‘above the fray’ is one of the most nuanced areas of Blogmanship, requiring ‘soft hands’ and a sureness of touch which, some argue, can never truly be learnt because one has to have been born with it.

First, the successful abovethefrayman needs a sense of timing. How gratifying it is to see a long, angry multi-participant debate, raging back and forth about some controversial topic (e.g. whether the United Nations truly has any moral authority over US foreign policy), suddenly won, perhaps at comment number 124, by a blogman making only his second contribution since the very start of the thread thus: “Gosh, are we still arguing about this one?”

The gambit can be made even more effective with a dash of elsewherecraft; that is, the implication that the blogman hasn’t been following the debate because he has been over on another, much more important blog, arguing about much more difficult matters. Dixon-Pollard has been known to wreak havoc on more than one message-board with the line: ‘Goodness me, is this still going on? Sorry I’ve missed the fun – as it happens I’ve just been having a bit of a set-to with a well-known so-called ‘philosopher’ about this subject, only writ large’.

Top fraymen like Dixon-Pollard will also make hay with fair’sfairmanship, a technique that allows the blogman to defeat not only his direct opponents but also those who agree with him.

The trick is to precede the attack on your opponent (Layman X) with a mild rebuke for your ally (Layman Y) for being right but getting there in the wrong way. For example:

LAYMAN X (opponent): I’m sick of listening to you old white middle-aged farts criticising multiculturalism. Britain is a different place now, get used to it.

LAYMAN Y (ally): There’s nothing progressive about changing ‘Christmas’ to ‘Winterval’. All that does is insult everyone – Christians, Muslims, the lot.

BLOGMAN (using fair’sfairmanship with second-order nonsequitur ploy): Actually that whole Winterval thing is a bit of an urban myth, Y, but you’re basically right. What X can’t seem to grasp is that Alf Garnett was the original multiculturalist.

Advanced Trollmanship
The National Society of Blogmen abhors the activities of common-or-garden internet ‘trolls’. Appearing unexpectedly on a Justin Beiber fan website and comparing Mr Beiber to an unmentionable part of the human anatomy, merely to upset and enrage impressionable teenagers, is anathema to the civilised craft of the blogman.

That being said, lessons can be taken, if not from the motives of the troll then perhaps from his tactics, and these subsequently applied to the infinitely more elevated field of Blogmanship. The purpose of the blogman, it must be remembered, is to be one-up, and should the opportunity arise to go one-up on the whole commentariat of a blog, it would arguably be churlish to refuse it.

Perhaps the finest example of trollmanship techniques applied to Blogmanship conditions witnessed in my lifetime was a comment by Dr D B C Cohen (yes, he of linkmanship fame – see Chapter III). Cohen, well known to be a professional attorney, allowed a long and involved discussion about the legality or otherwise of shooting a trespasser to develop unhindered. Then, after some forty-five comments and with the impeccable timing of the frayman, he entered with the devastating stopper:

The lawyers amongst us are cringing.

(It should be noted that some on the ‘traditionalist’ wing of the Blogman fraternity frown upon the so-called ‘nuclear option’ of advanced trollmanship, and see it as against the spirit of the craft.) 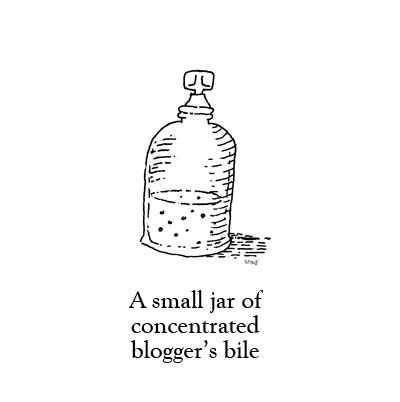 Moral indignationship (Warning: not for the beginner!)
Assuming a position of moral indignation is not recommended for any but the most experienced blogmen, and even then the donning of kid gloves is advised. This is because any overt display of sanctimony or outrage is vulnerable to a simple condescension play or, worse, a keep-your-hair-on counter.

In the right circumstances, however, the highly-trained blogman can reap significant one-up results from moral indignation:

– First, by implying that his opponent has said something deeply repugnant but that the blogman will give him the benefit of the doubt that it was due to ignorance rather than malice; and

– Second, by indirectly suggesting that he, the blogman, has a close relationship with a party – perhaps a brother or wife – who would be grievously hurt if they were to read the offending comment, but that the blogman is not going to go into it any further because there’s no need for things to get nasty.

Robinson-Fry, as a good an indignationman as anyone blogging, developed the formula: The more inoffensive the comment appears, the more effective the moral indignation ploy. Textbooks usually cite the example:

LAYMAN: It’s good that the American sympathy for the IRA seems to be in decline.
ROBINSON-FRY: Good grief. I know your heart’s in the right place – or I’ll assume it is –  but you want to be careful about where you make statements like that. I’ve been to a few family weddings where you’d get be lucky to get out with a fat lip and two black eyes for less than that.

Note that in the above exchange it is not clear whether it is Americans, Englishmen or Irishmen who ought to be offended; superb vaguemanship and clever pre-emptive counter-counterplay.

Some professional journalists, such as Christopher Hitchens or Nick Cohen, have made whole careers out of advanced moral indignationship, with the former’s Why Nelson Mandela Disgusts Me (1997) and the latter’s The Appalling War Crimes of Great Ormond Street Hospital (2001)  being essential reading for the budding outrageman.

Losemanship; or How to Go One-Up in an Argument You Have Clearly Lost

It happens that now and again even the most experienced blogman – perhaps taking his eye off the ball, or simply coming up against an opposing blogman on form – will find himself on the wrong end of a debate. He might have been counter-condescended, or perhaps accidentally stated a ‘fact’ which happened to be verifiable.

Such is life and there is no cause to be embarrassed or downhearted. For in these circumstances, the blogman can call upon the techniques of losemanship. This chapter offers an overview of the methodology for dealing with the principal ways of being ‘caught out’, and for turning an argument you have clearly lost into another opportunity for going ‘one-up’.

Methodology for squirming out of factual corrections
The blogman who has made the elementary schoolboy blunder of stating a ‘fact’ which can be objectively checked and shown to be false should employ the following steps:

(TIP: you may wish to print this step-by-step guide and pin it on a wall near your desk for future reference. It is also available in a full-colour flowchart A3 poster, for a modest fee, from the National Society of Blogmen)

Step 2: Examine the Wikipedia entry. Is it possible to reasonably doubt the Wiki fact, at any level? If so, proceed to Counter-Correction Ploy A.

Counter-Correction Ploy A:  Ah good old Wikipedia – yes sometimes you can find an actual fact between the urban myths, but it’s rare.

If the Wiki fact is supported by so many citations and further verifiable documents that it cannot reasonably be doubted, proceed to step 3.

Step 3: Examine your opponent. Having established that your fact is, indeed, verifiably incorrect, you must remember the blogman’s adage (see Chapter I) THE BLOGMAN KNOWS HOW TO PLAY THE MAN, NOT THE BALL.

Counter-Correction Ploy B (for earnest laymen): Oh, so I’m not allowed to make a typo? Sorry, I got this confused with a grown-up discussion.

Counter-Correction Ploy D (for unknowns. After a very long gap). Gosh are we still talking about this?*

COMING UP TOMORROW: In our final extract: Hostmanship; Blogwomanship; and the best Blogman positions to take on every controversial topic…