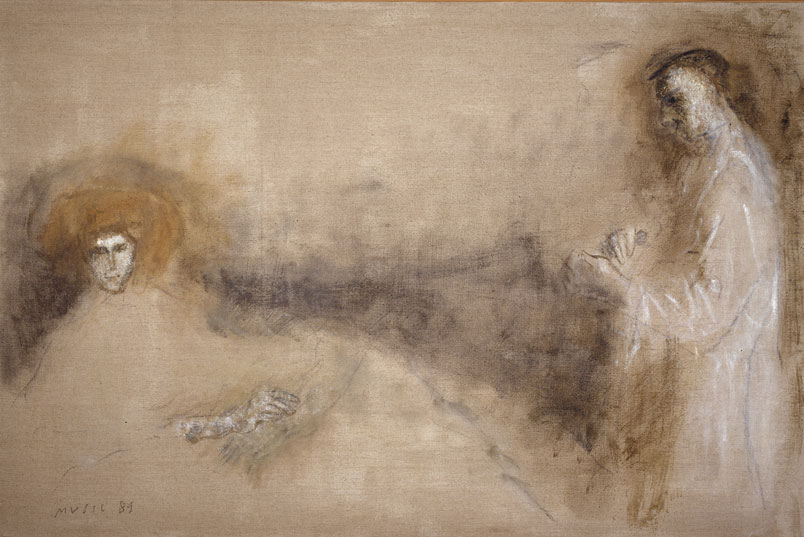 Yesterday, I had a glimpse into another world. It was afforded by a handful of remarkable works by Zoran Mušič in the Estorick Collection’s latest exhibition (Double Portrait: Ida Barbarigo and Zoran Mušič, to 12th June).

Large, figurative oil paintings, including portraits of the artist and his wife (above), they were executed in a cave-painter’s palette of silvery and charcoal grey, earthy ochre and umber, and chalky white. Palimpsest is a word that’s probably overused in high-falutin’ literary discourse but it seems appropriate for the effect seen here: the sketchy outlines of figures have an indistinct, almost watery quality, shadowed as they are by deeper, meandering lines. They’re loosely sketched, patchy. It’s as if they’re fading, like early photographs exposed to the sun.

Mušič spent most of his life in Venice and many of his works partake of the city’s atmospheres. One – Cathedral Interior – clearly hails from the light, bright, Adriatic Venice. Mušič had this to say about it:

In this immense light, all of a sudden I discovered the gold of St Mark’s. I have the impression that it is bringing forth something that was buried inside me, in my furthest memories. Echoes of my forgotten childhood, icons, golden images full of pearls. 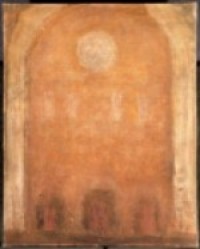 These other paintings though – the apparitions – seem to have arisen from the often baffling maze of the city’s backstreets, shadowy and sometimes fog-choked places that remind one that Venice has also been a Central European city, part of Mitteleuropa, an outpost of Austro-Hungary.

Mušič’s Slavic name rightly suggests he’s representative of this aspect of Venice’s heritage. He was born into the Austro-Hungarian Empire just as it was about to fragment into a mosaic of nationalisms. It wasn’t at all clear where he would fit into this shifting world: a Slovene born in an Austrian province his family had to abandon their home three times as war, irridentist Italians and consolidating Austrians made life impossible. They ended up in the Kingdom of the Serbs, Croats and Slovenes, whose name tells you as much as you need to know about the contingent, gimcrack structures that arose in the wake of empire.

After studying in Zagreb, Prague and Vienna, Mušič travelled to Spain and along the Dalmatian coast, the latter providing him with an imaginative landscape that would inspire him throughout his life. The Second World War did nothing to cease his peripatetic existence, moving him from Ljubliana to Trieste and then, fatefully, Venice.

There he found a home and his future wife (Ida Barbarigo, who shares the exhibition – space prevents me telling you about her work, which is worth seeing). Disastrously, the move also led to his being arrested by the SS (he was supposedly using binoculars whilst painting a canal and was mistaken for a spy), tortured and sent to Dachau. This was 1944 and he managed to survive, returning to Venice and marrying Ida shortly thereafter. This shattering experience led to the series of paintings for which Mušič is best-known in this country (when he’s known at all): the ruefully-titled We Are Not The Last (some of which can be seen in the permanent collection of The Estorick, below). 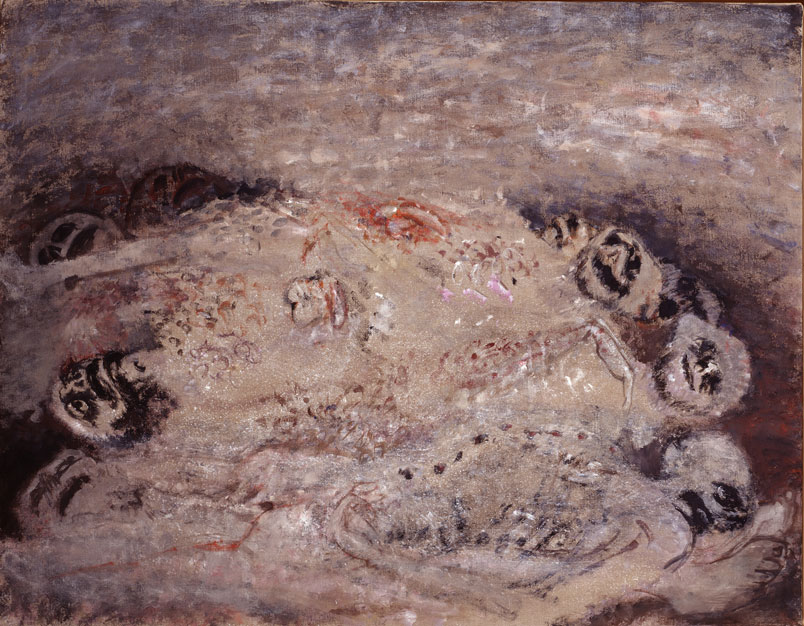 Understanding something of Mušič’s history is invaluable in appreciating his art. One can discern a fascinating and probably unique set of influences: from the icons of his childhood, through the Spanish landscapes of El Greco and the fluency of Goya, and across the primitivism of Picasso, back to the Vienna Secession – Schiele’s twisted forms, the elegant and decorated poses of Klimt. For me it’s the last that is the most intriguing influence.

Given his Austro-Hungarian background and education we might justifiably describe Mušič as an heir of the Secession. How might Schiele and Klimt have responded, not just to the dissolution of their world, but its transformation into something that was capable of harbouring a place like Dachau? And what if they had actually lived this ugliest of transformations? We Are Not The Last provides a compelling suggestion.

But then Mušič continued to work to the end of the twentieth century, having witnessed by that time a bewildering number of empires collapse, the civilisation he was born into disappearing beneath mound after mound of rubble – an epic odyssey. And so we come back to these other-worldly paintings from the 1980s and ’90s.

It might seem a little absurd but I felt I was standing before the work of the last representative of an alien civilisation. Sophisticated contrivances had been abandoned for something more primitive, the sketchy hieroglyphs communicating immense pathos: a world was dying, as testified by this final transmission, ‘powerful but hardly there, just coming through the ether like a radio signal’ (to quote a friend describing one of his own works).

Mušič was in his seventies, eighties and even nineties when they were painted. Their feeling of erasure, of dissolution, might therefore be more directly personal: they’re reflections of mortality. But one also senses very strongly a persistence. One in particular, The Philosopher (below), even conveys a sense of transcendence: a spectral figure looks directly at us, hands clasped around a silvery efflorescence; perhaps alchemist as much as philosopher. It’s the most mystical of Mušič’s works here, perhaps one that affords us a shrouded glimpse of ‘a golden image full of pearls’.

I’m not sure we can ask much more of art than to reflect on the life and death not just of an individual but of a civilisation, to mourn what’s been lost as well as adumbrate what might persist – not least the work itself, of which there is much more than I’ve explored here. Catch it while you can, particularly as Mušič appears to have been strangely disregarded in this country, as his (only) newspaper obituary makes clear. He died in 2005 and the lack of coverage in the press of this albeit small exhibition suggests the neglect continues. 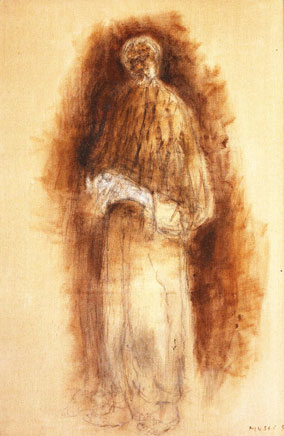 9 thoughts on “The dying world of Zoran Music”