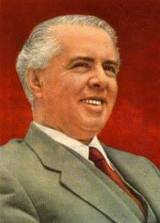 In an occasional series Daniel Kalder examines the literary endeavours of the world’s dictators. This week we look back at Enver Hoxha and his turgid, book-length love letter to another old monster.

Even by the standards of psychotic 20th-century communist dictators, Albania’s Enver Hoxha (1908-1985) stands out as exceptional. Born in a country that was still 99% agrarian and ruled between 1925 and 1939 by a chap named Zog, Hoxha rose to power after the second world war and soon gained notoriety as an ultra-Stalinist, continuously purging the ruling Party of Labour for 40 years while steering Albania into a state of profound poverty and near total isolation. When Khruschev denounced Stalin in 1956, the outraged Hoxha realigned Albania with Mao’s China, where terror still flourished on a scale he could appreciate. However when the Chinese hosted Hoxha’s nemesis Tito in 1978 that alliance also ended and Albania might as well have been located on another planet.

With Albania’s inhabitants thus cut off from any external frame of reference, Hoxha was ideally placed to invade their consciousnesses with his turgid prose. Between 1968 and 1980 he churned out no less than 79 volumes of memoirs, making him the Alexander McCall Smith of tyrant-authors in productivity, if not popularity. Ismail Kadare, his main literary rival could not compete, and nor would he have dared. Today we are looking at With Stalin, published in 1979 to mark the 100th anniversary of the birth of Hoxha’s idol, Joseph Stalin.

With Stalin is divided into six sections – an introduction and five mini-memoirs dedicated to each of Hoxha’s encounters with the Georgian tyrant between 1947 and 1951. The introduction is a tour de force of sustained inversion in which Stalin is portrayed as ineffably kind, gentle, patient etc. This ruthless irony extends mercilessly over almost 50 pages until it becomes quite exhausting, a quality only exacerbated by the fact that it is not even remotely intentional. But the panegyric ends on a tragic note, as Hoxha reveals that Khruschev led the Soviet Union away from the Truth. He then issues a rambling appeal to the USSR’s young people to return to the path of Stalinist righteousness. Hoxha must have known that Soviet youth would never read it, and thus With Stalin early acquires an eerie tone, suggestive of a disembodied voice ranting to itself in darkness, an impression that persists throughout the rest of the book.

But if With Stalin can be read as a work of psychological horror, it is a crushingly dull example of the genre. As a portrait of a monster by a monster, the book should be interesting: alas, for the most part the memoir sections are straight hagiography, detailed illustrations of the wise demigod of Soviet propaganda in action. On closer inspection however, it becomes clear that Hoxha is engaged in something rather subtle: a double hagiography, slyly promoting his own personality cult alongside his hero. Hoxha’s Stalin shows a suspicious tendency to agree with young Enver, who occasionally pre-empts his master’s judgments. Portraying himself as an apt pupil at the master’s feet, Hoxha thus establishes continuity between Stalin’s USSR and his own rule, thus “proving” that his particular sectarian offshoot of communism is the “true” heir to the Revolution, even if it is entirely without influence on world affairs.

Hoxha’s Stalin ceases to be a talking icon only briefly, when he displays a curiosity about Albanian ethnicity and language. Stalin was the Bolsheviks’ minorities expert and thus it rings true when he inquires whether Hoxha’s Albanians and those of the Caucasus and Crimea are related. There are also brief flashes of homoerotic tension. Hoxha is “breathless” at the thought of encountering Joseph Vissarionovich in the flesh and admits to “dreaming night and day of meeting Stalin”. He even ends the first meeting sitting thigh to thigh with his idol on a sofa, watching a stirring Soviet musical called Tractor Drivers. “Frequently he would raise his warm voice to comment …” says Enver dreamily, before retreating to his room to whack one off. Well not really, but there is a distinct whiff of hand cream in the air.

Hoxha also uses With Stalin to settle old scores. As the book progresses, he increasingly vents his spleen against “imperialists” and “monarcho-fascists” before denouncing every communist group in his neighbourhood, from Yugoslavia to Greece. His is a world where every ally is an enemy in waiting, where only Stalin is true. Reading about these obscure disputes was unnerving as I was relying on Hoxha for my facts – a dangerous position to be in. Reading between the lines meanwhile was difficult as Hoxha kept repeating himself as if aware he had to drown out questions and doubts. Wary of falling prey to his propaganda I did what I imagine many Albanians did at the time – I tuned out.

Now that I was spending much of my time on the surface of the prose I became much more aware of its violence. By that I don’t just mean the frequent references to “physical liquidations”, or Hoxha’s pledges to “wipe out” his foes, but also the aggressive and monotonous insistence on forward movement. Hoxha kept repeating the same incantations about grateful workers, peace, brotherhood and progress. These words were an act of terror against the reader, a wilful, malevolent denial of reality.

Towards the end it became very difficult to pick up With Stalin, to keep subjecting myself to the lies. I shuddered to imagine what it was like to be trapped on Planet Enver, subjected to this level of deceit every day. A (very) distant analogy to the experience of reading Hoxha is suffering through the “dizzy with success” rhetoric the government produces every summer when the year’s inflated exam results are released.

However, in the UK there are multiple competing discourses, so it’s easy to ignore the government’s cynical blather. In Albania, it was all Enver, all the time – except for the occasional Norman Wisdom break, of course. Also, dissenters could be killed. So there’s no comparison really, and thus however awful With Stalin may be, ploughing through it today mercifully offers the reader but a shadow many times removed of the horror that was Hoxha’s Albania.

(A version of this post originally appeared on The Guardian’s Books Blog).