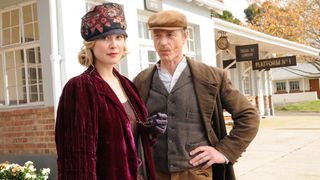 The BBC’s adaptation of D H Lawrence’s Women in Love looked lovely (viewable on the iPlayer). There was a lot of white, from the white horses at the beginning to the sheets hanging in the garden, the tiles in the kitchen and the women‘s blouses and petticoats. There were muted soft colours as well –  greys, or greens of tweed and the woods. So when Gudrun Brangwen, (Rosamund Pike) who is cream and gold, put on her colourful arty clothes she looked splendid and different. Care had gone to approach scenes from unexpected angles. Its looks, however, were the best thing going for it. The script was terrible.

It was first of all disjointed. You went from one character to another not knowing how they connected to each other and why they were there. Then there were the characters themselves. There are two Brangwen sisters, Ursula (Rachael Stirling) and Gudrun. At the beginning Ursula gives a little lecture to her sister Gudrun not to see her life in relation to some man. But Ursula in fact is only portrayed in that way, as something female that miscarries, bleeds, yearns, is raped, and has sex. She talks – about love, lust, and sex – but there’s nothing of her there. I don’t mean she should have been given the job of a nuclear physicist, but that she should have been given an outline – meek or fierce, sweet or bitter.  But she was a blur who said things like:- “You do not accompany me into the unknown.  You do not set off with me.”

Lawrence said of his novel The Rainbow where Ursula first features that “You mustn’t look in my novel for the old stable ego of character.”   I’m suspicious of artists who say you mustn’t expect something in their art which in fact is an important aspect of it. I think they are making excuses for being unable to bring something off.  He couldn’t do it with Ursula and nor could the script writer.

As her doings took up a large part of the screen time, it was a relief to get off with Gudrun, the ball-breaker, cock-teaser, home-wrecker and life-grabber. She at least was very much there, and she had a gang of Bohemian friends with cigarettes holders to set her off.  So her scaring her older married lover into flight had some drama to it.  Rosamund Pike was fine playing her. I very much liked Rosamund Pike as the beautiful ninny Helen in An Education and would love to see her in more comedy.  With her round flat face and tiny nose she reminds me of a sunfish.

Gerald Crich (Joseph Mawle) the alpha male, was the supposed force of modernity  – and we know that because his friend Rupert Birkin keeps telling him so.   Being told what people represent – being explicit instead of implicit – was one way the script had of being bad.  Mawle has the right kind of devilish attractiveness for the role.  But Rory Kinnear as Rupert Birkin came on to the Crich estate like Hugh Grant at Four Weddings and a Funeral, in self-conscious diffidence, so that his terrifying ex-girlfriend Hermione Roddice (Olivia Grant) looked like Duckface pursuing him.  He played the priest losing his faith who then believes instead in love, love, love.  He is a bit too cherubic to appear as the anguished intellectual.

The theme of Women in Love is passion; lust; love; fulfilment.  In this series that was expressed by shagging. So it was a shagathon, much of it al fresco – beaches, woods, against trees. Good shag, bad shag, female with clenched hands enduring it, female moaning enjoying it. Then some talking in between about sex and love.  I found it a terrible plod.  I left the two couples when they went off to Africa.

Love, passion, marriage – there are other ways of portraying them on screen besides bonking.  Ages ago there was a television version of Lawrence’s Sons and Lovers.  The Morels in that story are a miner who has married a genteel lady, and they are always at odds. One scene still stays with me.  The husband and wife are sitting by the fire, he reading the paper, she sewing.

Mrs Morel:- “Walter, I think I’m with child again.”
Mr Morel:- (Slyly, looking at his newspaper) “Oh!  I wonder how that happened?”
Mrs Morel:- (looks up at him and smiles slightly.)

That gave far more of a sense that a sexual spark can keep an unhappy marriage smouldering than any amount of shagging and talking about “you are my soul”.

is brought to you by
Glengoyne single malt whisky – the Dabbler’s choice.