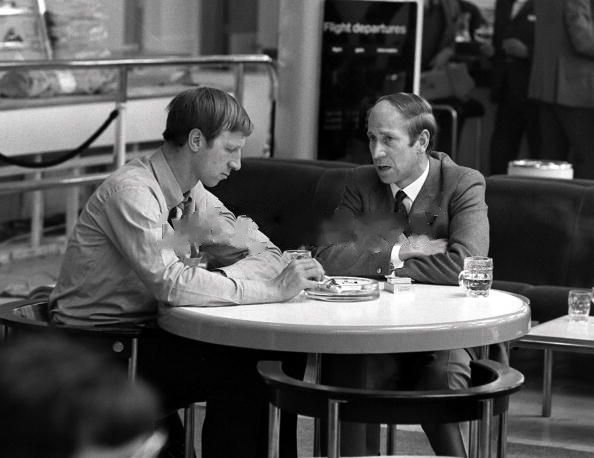 Bobby Charlton’s at the airport, and out in the night somewhere my father’s car combs the wet roads. I’ve slid my body into the back seat footwell and I’m shaking and sobbing with homesickness: at the airport, Bobby Charlton is dressed in a suit and tie and smoking. There’s a drink in his other hand and I’m looking up at the rear passenger window where air pressure is pushing trails of water up the glass. The wipers tick once every time the tall motorway lights sweep the car. Then we’re onto the black narrow lanes that separate Beaconsfield and Windsor. They’ve flooded tonight, and where the road dips steeply, a stalled car sits in deep water. I remember my father extracting waders from the boot, the loud, close rasp of canvas as he pulls them on, his figure striding away to help.

Through the windscreen, I watch his head and shoulders bob lower and lower and then the rain smears him out. At the airport, Bobby Charlton exchanges brief words with the other men, and my mind flicks back to the motorway services restaurant and I’m breathing in cigarettes once more as cars and lorries roll beneath us and I spoon stripey ice cream from a glass. Hours later, in a modern room somewhere, my father enters under dimmed lights carrying a plate of toasted cheese. On his television a passenger jet hauls itself off the runway, screaming: black smoke follows it all the way up into the sky.

I waited twenty years to grow up into that man’s world of airports, night flights, brandy, talk and cigarettes. But when I got there, I found it hadn’t waited for me. It was all different. Even the late nights had changed. Even Bobby Charlton had changed. Where the thirty-something athlete with his drink and his teammates had stood and smoked was a different Bobby Charlton, a myth and icon, cloth-capped and poor, who rode the bus to matches with the fans, who played for his local side with ten other local lads and did it all for a bob a week. And we didn’t see his like no more.

Not that there’s anything wrong with using top footballers like this, to describe an ideal of the English urban industrial life and then to decry its passing. Localism, loyalty, kindness and lifelong friendships are good things. The world ruled by Eric Morecambe and Barbara Castle has much to recommend it and no, it probably isn’t represented by John Terry or Rio Ferdinand.

But it remains true that Bobby Charlton was, for all the heartbreak that flying brought him, one of the first ordinary British civilians to travel by jet. Twenty-five years before that, Herbert Chapman’s Arsenal were in the air too, flying to Paris from Croydon at the start of close season tours. And twenty-five years before that, in Edward VII’s reign, Robert Crompton of Blackburn Rovers and England bought himself not just a car, but one of the country’s first real motor dealerships.

Top footballers are bad epitomizers of the past now because they were bellwethers and accidental technological pioneers then. It has been their misfortune, in a world supposed to be so traditional, to find themselves forever at the cutting edge. And there are only so many cutting edges you want to be at: the Burj Dubai leaves me cold, and so do Bentley dealerships. They probably leave you cold too. But to visit a late night Heathrow, in 1969? Back among the adults, with drinks and suits and cigarettes and muted jazz and my grandparents’ poverty routed: that, from here? For me, that would feel fine: that would feel like coming home, coming home after a very long time away.