In an office in Victoria Street, strewn with soiled straw and family chickenbuckets, a behemothic bastard, seated, faces a scrawny Australian, standing. Noseybonk, shrunk to the size of a funnelweb spider, lurks in the dank and sees all.

“Loog,” begins Ed Balls, his face a gigantic scarlet marshmallow punctured with fagburn eyedots. “You may be wondering why I’ve summoned you.”

“Not really,” says the Australian.

“I have in my possession some papers. Take a look.” Across the table Balls throws three sheaves, thickened and glazed by the ooze of his fingergrease.

“These, Loog, are the expurgated sections of Sarah Brown’s diaries. You feature prominently….”

Wednesday, June 27, 2007
Gordon is about to go to Buckingham Palace to take up the office of Prime Minister. This will be a moment that I don’t know if either of us thought would ever come. “About fugging time,” says Gordon before I can shush him.

As we drive up the Mall, we see throngs of people lining the streets, many clapping and waving us on our way, some making other gestures. I suddenly feel quite self-conscious, as though everyone can see us in microscopic detail. It’s uncomfortable as I am a very private, hard working girl and no lover of attention.

I am wearing a pretty red floral dress by Katherine Hooker, a cream jacket with red trim, and some snazzy red patent sling-backs. I keep wondering whether my skirt will be creased when I stand up again.

At the Palace, Gordon is whisked upstairs to see the Queen. I am taken to a side room and engaged in delightful conversation by the lady-in-waiting. We talk about Harry Potter (HP7 is just out and everyone is reading it). I explain that Jo (JK) Rowling, author of the Harry Potters, is one of my best girlfriends. The lady-in-waiting is thrilled. This serves to distract me perfectly from any chance of getting (more) dizzier.

As we descend the staircase to leave the Palace, Gordon is now officially the Prime Minister. I don’t know quite what happened up there but a few of the ladies are looking a bit shocked.

Then there’s a bit of an unfortunate slip as Gordon says rather too loudly: “That was a disaster – they should never have put me alone with that bigoted woman.” I look up and see that a film crew is recording every moment of me in my pretty red floral dress by Katherine Hooker, my cream jacket with red trim, and my snazzy red patent sling-backs, but also recording everything that Gordon says. Another gaffe!

I literally fight back tears and grin. I don’t say anything to Gordon, but leave him to go over his thoughts for what he wants to say outside Downing Street. I just sit, looking out of the windows on to the Mall, hearing a great hush. I am resolved to do something about Gordon’s personality. As PM he simply can’t go on being so brusque and Scottish.

I am determined to make him charming.

Monday, July 17, 2007
I am at my wits end, as I remarked to my best pal Jo (JK) Rowling, author of the Harry Potters. I’ve hired so-called ‘Charm Instructor’ after so-called ‘Personality Coach’ after so-called ‘Guru’ but Gordon just seems beyond help. Most have left in tears. Alain de Botton was in floods after Gordon told him where to shove his Proust.

Gordon just seems to be missing the Charm Gene. Ed Balls and Alastair Campbell are no help, they’re a bad influence. It’s all ‘fug this’ and ‘fug that’ when they get together.

But Jo (JK) Rowling might just have come up trumps. She’s given me the name of a chap in Harley Street, an Australian Charm Instructor, if you can believe such a thing.

Wednesday, July 19, 2007
I think I might just have found our man! I do feel a bit cloak-and-dagger, sneaking out to Harley Street on my own. Gordon made me swear there’d be no more Charm Lessons after the last fiasco but it’s got to be worth one last throw of the dice.

The Australian’s name is Lionel Loog and he’s very tall and strange. Quite the shabbiest basement consulting room you’ve ever seen – dust all over my pretty red floral dress by Katherine Hooker, my cream jacket with red trim, and my snazzy red patent sling-backs – and I have to do something extremely fiddly with the lift. But there’s something about Mr Loog that inspires confidence.

Now the difficult bit: persuading Gordon! I shall have to use all my feminine wiles…

Monday July 24, 2007
What a disaster! It was hard enough getting Gordon to go at all (“Australian fugging Charm Instructor! What next, a French war hero?” he yells, throwing a hardback copy of HP 7 by my best girlfriend Jo (JK) Rowling across the room).

Then when I finally get him to Harley Street there is a terrible business of Gordon demanding that Mr Loog address him as “The Right Hon. Gordon Brown PC MP, Prime Minister of the United Kingdom”, while Mr Loog insists that within his consulting room they have to be ‘equals’ and call each other ‘Lionel’ and ‘Gordon’.

I wait outside for half an hour and there is all sorts of raving and ranting and things going smash – which is all quite normal if a room contains Gordon – but I admit that underneath my cream jacket with red trim, my heart is sinking. Then all of a sudden Gordon comes charging out. “No!” he shouts at me, meaning that Mr Loog is no good.

I am about to follow him when Mr Loog appears at the door. He shrugs, but hands me a DVD . “This recording is free,” he says. “Please keep it as a souvenir?”

Frankly I’m terrified. Gordon has to do a live broadcast on the internet soon and I dread how many times he’s going to glower during it. Glowering is a real problem for Gordon. That and the throwing.

We are relaxing at Number 10 – I’d kicked off my snazzy red patent sling-backs and Gordon was settling down for a good glower at Newsnight – when I find Mr Loog’s DVD in my snazzy black patent designer handbag by Hermes. So when Gordon is taking a break from fugging at Kirsty Wark I slip the DVD into the player and… well, it’s nothing short of amazing!

There he is, my Gordon, talking into the camera… not glowering, not swearing, not even throwing anything, just talking about fiscal policy with an expression that is, if not friendly (these are early days!), then at least not obviously full of hate and rage.

“But Gordon!” I exclaim. “This is wonderful! How on earth did Mr Loog manage to get you to do that?”

“I don’t want to talk about it,” growls Gordon. “The man is doubtful. It was a very uncomfortable experience.”

“But Gordon!” I admonish. “Look at the results! And your live internet broadcast is only days away. I’m going to call Mr Loog right now.”

“Very well,” glowers Gordon. “For the good of the country I will see the man. But he has to address me properly.”

Gordon has been to see Mr Loog every day, plus homework between visits. He does the most extraordinary exercises: jumping on the spot, rolling around on the floor, putting his fingers in his cheeks and stretching his grimace upwards as far as it will go. He’s really determined to beat his charmlessness.

The two men have become inseparable. As they parted on Monday I distinctly heard Mr Loog say “Goodnight, Gordon” and Gordon reply “Thank you … Lionel. And goodbye.”

But the live internet broadcast is tomorrow and frankly we’re all terrified. You could cut the tension with a knife. I shall be wearing my lucky red floral dress by Katherine Hooker and keeping my fingers crossed. 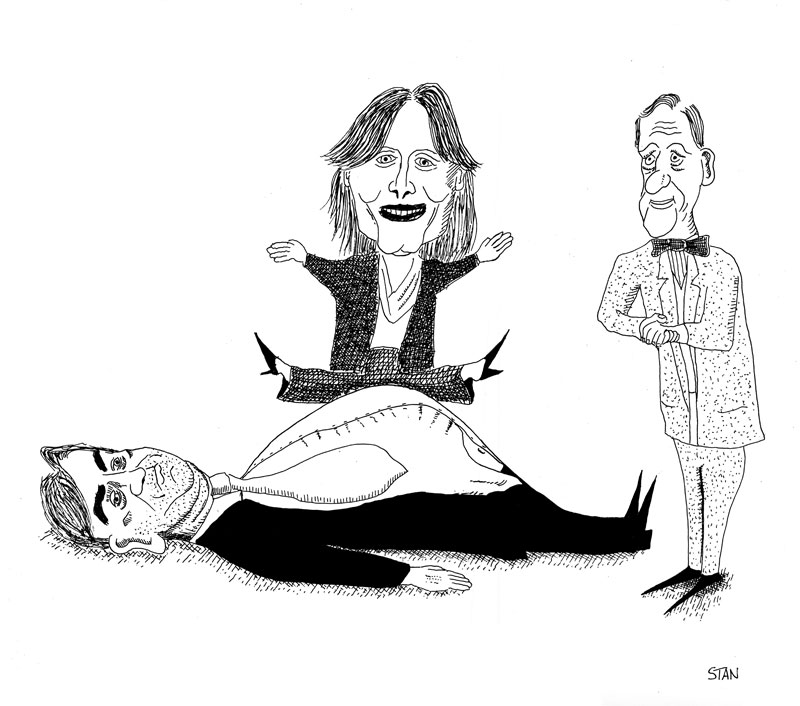 Thursday August 3, 2007 – am
The big day is here! At breakfast nobody can eat as we’ve all got butterflies. Lionel arrives at 8am with his apparatus and he and Gordon lock themselves away to rehearse his speech over and over.

For the live broadcast Lionel has set up a private little room, as cosy and familiar as possible. He’ll be holding the camera and it will be just the two of them together, with Gordon speaking directly to Lionel as if there’s nobody else watching.

Gordon has worked so hard, he deserves this to go well. We’re all rooting for him.

We gather in the living room to watch live on the internet. My best girlfriends including Jo (JK) Rowling, author of the Harry Potters, broadcaster Mariella Frostrup, charity director Emma Freud and novelist Kathy Lette are all here to lend support. Maggie Darling has made one of her fabulous chocolate cakes while at home in Edinburgh and brought it down on the train. Nelson Mandela and his wife, Graca Machel – the two people whom Gordon and I most admire – are here. Piers Morgan finds himself sitting next to PepsiCo chief Indra Nooyi, one of very few women chief executives of a large plc firm, and I am seated next to HM Queen Rania and [rock star] Annie Lennox, who both give little speeches. My regular hairdresser, Australian Mark Pittman is here, having come to blow-dry my hair – something I have never managed to do well myself.

We all watch the clock, anxiously…

– pm
TRIUMPH!!! Give that Australian a knighthood!!!

Back in the Victoria Street office, strewn with offal and hay, Lionel Loog has finished reading. “Well, it’s accurate enough. What do you want from me, Mr Balls?” he says at length.

“I want you to do it for me of course, you ignorant convict fugger,” snarls Balls.

“But how the fug did you get Brown to smile like that?”

“A simple enough technique, once you’ve done the groundwork.”

“Very well,” sighs Lionel Loog. “First, you have to really want to overcome your charmlessness. Second, you have to learn to conquer your fears. Third, you have to work at it every day, hour after hour…”

“…And then, for the broadcast, we pretended it was just the two of us, as if there was nobody else in the room. And at the crucial moment, I just…”

To be continued. Apologies to Sarah Brown and Tom Hooper. Noseybonk can see you. Illustration by Stan Madeley.