[The story so far… Ed Balls is determined to ‘squash’ his rival Ed Milliband; Boris Johnson’s Latvian Nanny is on the trail of the Black Rabbit; Art Garfunkel and Elton John have been plagiarising Alain de Botton’s Tweets; and Rod Lidl, attempting to rescue elusive poet Grayson Ellis from a well in the Shropshire moors, has fallen in with him and they have spent Christmas in starving confinement …]

Starlight on moonblue snow at Titterstone Clee. The fateful well stands lonely as a shunned mausoleum in the night. Towards it, across the Shropshan tundra, two soundless figures glide like black swans over ice, leaving no footprints in their wake. They bear crampons and rope.

And in that bitter, gunge-frozen well, unaware of their imminent saviours and long without hope, elusive poet Grayson Ellis and notorious hack Rod Lidl lie curdled about each other. Thin and useless as two crumpled straws in a Slush Puppy, they embrace for warmth: closer than lovers, curly beards grown entangled. Trembling with tenderness, lips that would kiss form prayers to broken stone. Their dried voices, when they whisper together, are quiet and meaningless as wind in dry grass or rats’ feet over broken glass. Blind as molerats, there are no eyes here, in this valley of broken stars. Broken, broken, broken.

Rescue appears from nothing. Neither can cry out in joy or pain as the diminutive ninjas appear above them, hoods blacker than the night sky, silhouettes against zero, shapes without form, shades without colour.

Only a dim umbilical muscle memory commands Rod’s clutches at the lowered ropes. He is first to ascend, kicking away his fellow prisoner, his embryonic twin, to begin the long scrabble up the chamber to life. Grayson gropes pathetically after him, the supplication of a dead man’s hand under the twinkle of a fading star. Rod surfaces. Up in the well’s mouth there are urgent whispers and stifled exclamations.

But soon the rope returns for Grayson too. Numb, he observes his own hands as they grip the cords and there, then, in the moment between the motion and the act, between the desire and the spasm, he falls – a shadow – unconscious into the puppet’s ascent, falls up into the moonblue snow, up into the starlight, up into the shadow of Titterstone Clee.

But Noseybonk skis back and forth along Time’s undulating slopes like a Finn. We have jumped ahead of the story. Let us go back, back to London….

The Mirrors of Master Assange

Here is Master Julian Assange at his toilet. Perfumed mirrors encircle him, his mane unfurls like silver silk. In dapper dressing-gown he rehearses his sashay, up and down the boudoir, up and down as outside cold London rains hammer the smoked windows and deep in the vaults of his lair committed minions sit geeking at computer screens, urgently bottling the leaks and ooze of America’s black heart.

“I do believe,” he tells the one of the hundred reflected Assange noses that surround him, “that you are even more deliciously pointy than Marina Hyde’s.”

Satisfied with self, he sashays forth to the Hall of Marble and blows an insignificant whistle. Instantly his two most deadly and committed minions appear, warping from silence as if from the void. “Bidisha, Chakrabarti,” he addresses them. “What news from the field?”

Bidisha, tiny but fearless, swaddled like her comrade in ninja-black robes, steps forward to bow. “My Lord, Former Comrade Paulin has been found. He has confessed to failure.”

“Yes my Lord. But we have information as to his whereabouts.”

“Yes my Lord,” chimes Chakrabarti. “He resisted for some hours but in the end…In the end…”

“Very good.” Assange pauses to eye his calligraphic profile in a marble column. Looking up to a mounted monitor, his face loops handsomely on a rolling television news channel. Raising my profile and raising my profile, he muses wittily, before snapping back. “Well? What are you waiting for? Go and get me Grayson Ellis!”

“Yes my Lord,” replies BidishaChakrabarti in unison, and in a moment they are gone, as if warped back into the void, the void from which Noseybonk peeps and sees all.

Alone again, Master Assange proceeds through the Hall of Marble and enters the glass elevator which issues him down, down into the deepest, farthest vaults of his lair, down where no minions geek. Through thick iron doors guarded by technology and bulk, password by password he proceeds, to at last the most secret cell of all. Scanners read his eyeballs, fingerprints, liver, lungs, buttocks, ankles, wallet, spleen, ego and solar plexus and he passes into the sub-ante-antechamber. He taps a code, then another, then produces a syringe and needle, extracts the blood sample from his arm and pumps it into the DNA receptacle. At last, the safe opens. Assange removes a wooden box, and with infinite care, turns the tiny lock with a key kept on a chain next to his precious, sculpted, liberal, fearless, all-powerful bosom.

He takes from the box the ivory-framed hand mirror and exquisite bone comb. This last he passes through his silver mane for long ecstatic minutes. Master Assange peers into the mirror, angling this way and that, and had he not been wholly absorbed by the contours of his own visage he may yet have caught a fleeting flash of grinning Noseybonk in the cell behind him.

But Noseybonk is not to be seen, as Master Assange glances, with a memory-speck of guilt, left and right… before he leans to the mirror and gently licks it from bottom to top. 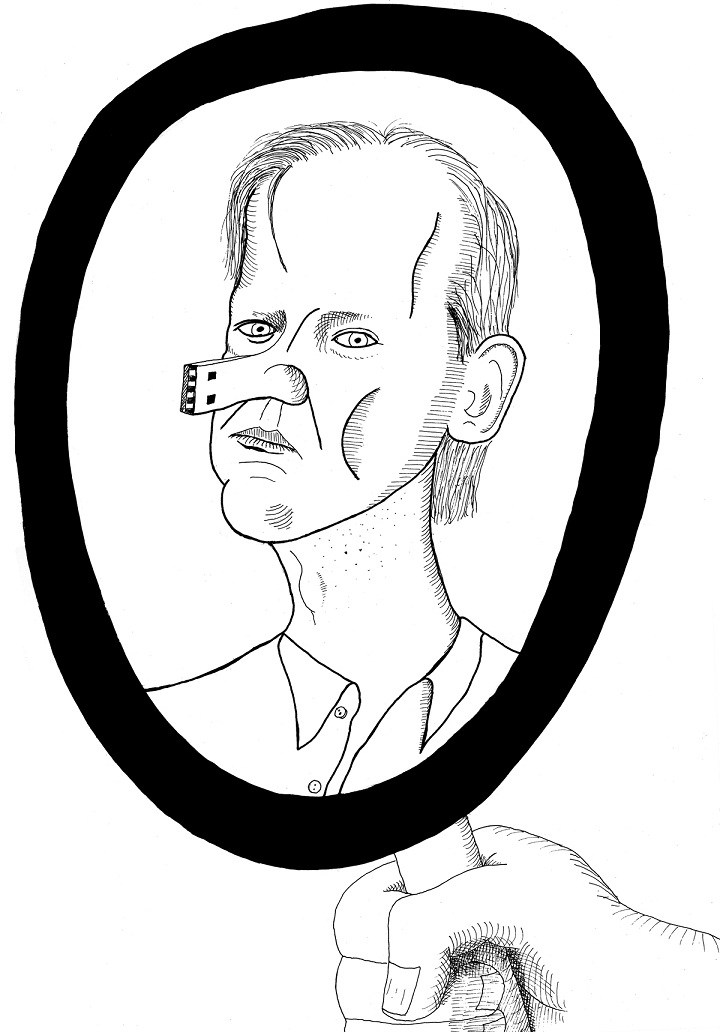 Nina at the well

We are back again, forward in time. At Titterstone Clee the snows have sludged into the sod.

But who is this, marching with determined stride across the moors, carrying satchel and grappling tackle? She is indomitable, she is Latvian. She is none other than Nina, nanny to the Mayor of London. She reaches the well and urges her head into the gloom. “Hello? Mister Grayson Ellis? You are down there?”

But answer comes there none. And no tracks are to be seen. She has come a long way. Nina allows herself a brief exasperated stamp of the foot, then resuming her Latvian indomitability, she marches on.

How did she come to be here, in the forsaken Shropshire moors, under the shadow of Titterstone Clee? The answer lies in the future, when Noseybonk, skiing like a Finn over Time’s slopes, goes back to the past and reveals all…

To be continued. Apologies to Eliot. Noseybonk can see you. Illustration by Stan Madeley.

6 thoughts on “Noseybonk 10: Julian Assange at his toilet”