Well done to Jonathan Law, who got the overall answer to our latest Round Blogworld Quiz, and to Nige, Maureen,  Mark and Worm who got various of the individual elements. To reveal the full solution, click Continue… 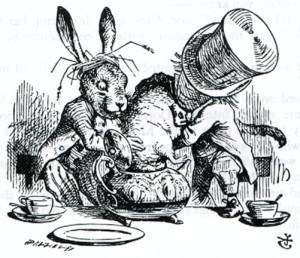 What links something potty in Wonderland with Potter’s washerwoman, an ambulant minty mascot, some northern trolls, a western flyer that nearly vindicates Aristotle, and something staring you in the face?

The answer is…. Hibernation!

Something potty in Wonderland is the Dormouse, which was snoozing in the teapot at the Mad Hatter’s Tea Party. Dormice can sleep six months of the year or even longer, and the name comes from the Anglo-Norman ‘dormeus’ (sleepy one), subsequently adapted via ‘folk etymology’ to resemble the word ‘mouse’.

Beatrix Potter’s washerwoman was the hedgehog Mrs Tiggywinkle. Hedgehogs generally hibernate from November to March although bigger ones may nod off  as early as September. (If I remember correctly, building a hedghehog sleeping box was a project regularly suggested for eager tinies by the presenters of Blue Peter.) 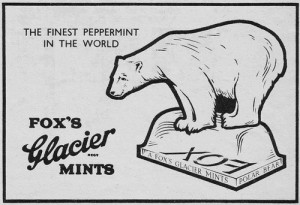 The minty mascot refers to the Peppy the Polar Bear, used to advertise Fox’s Glacier Mints since 1922. Extraordinarily, Fox’s originally commissioned a taxidermist to shoot and stuff a real polar bear, which was put out on display all over the country at football matches and other public events. The exhibition eventually incorporated as many as four other stuffed polar bears, and was only abandoned in the 1960s when Rowntree acquired the company.

Polar bears with no food source can enter a state scientists call walking hibernation, in which they are able to save energy by reducing their metabolic rate and recycling proteins – hence ‘ambulant’.

The northern trolls are the Moomins, Tove Jansson’s famous Swedish-Finnish creations. They sensibly hibernate during the winter.

Now the tricky one. The ‘western flyer’ is the Common Poorwill – a nocturnal bird of the nightjar family,  found in the Americas. It is the only bird known to hibernate, being able to go into torpor for extended periods, up to several months.

Thus the Common Poorwill ‘nearly vindicates Artistotle’, who famously made the error of thinking that birds hibernate during the winter months, rather than migrating huge distances to warmer climes. Aristotle knew that Greece’s swallows disappeared during the winter, but he had no reports of them being anywhere else in the world, and would probably have doubted that such small birds could make a long overseas journey anyway. His conclusion – generally accepted for a couple of thousand years – was that the swallows must hibernate in hollows and other nooks and crannies.

Finally, the thing staring you in the face is of course your computer, which might go into ‘hibernation’ if you just leave the damn thing alone for five minutes….

Thanks to Adelephant for the question. If you would like to submit a fiendish puzzler to the Round Blogworld Quiz, just email editorial@thedabbler.co.uk. It should be tricky, but reasonably get-able with good guesswork and google. We’ll help with phrasing if necessary…

2 thoughts on “Round Blogworld Quiz #5: The Solution”