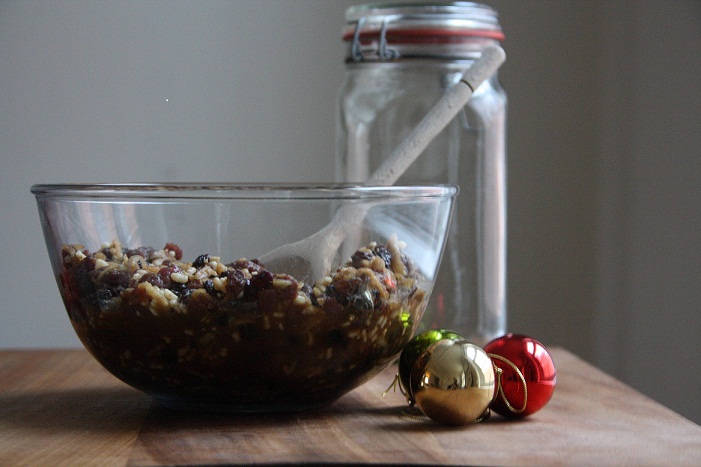 A seasonal recipe for venison mincemeat, from the Dabbler’s foodie whizz Jassy, who also blogs at Gin and Crumpets.

The Christmas tree is up, half the Advent calendar doors stand gaping and the presents are a mess of wrapping paper and Sellotape, but there is still time to make your own mincemeat and have it ready for Christmas Eve.

The trajectory of the mince pie story is not an entirely happy one. They have their origins in the sweet and spicy Middle Eastern dishes that the Crusaders brought back to England in the 13th century. Originally long, oblong pies, they became smaller and smaller, were briefly banned as Popery in a pie crust and eventually lost their meatier elements in the Victorian era.

There is still, in theory, suet lurking in amongst the dried fruit, but these days that’s often replaced with vegetable shortening and the rich depth of flavour you can only get from animal fat is abandoned in favour of the easy pleasure of sugar.

The traditional meats for mincemeat are mutton, goose and ox tongue, but I’ve opted for venison for the vision of wintry decadence it conjures up in my mind. Buy venison steak and chop it finely – into chunks about ¼ of the size of your littlest fingernail – and if you can get it, use fresh beef suet.

When it comes to turning the mincemeat into mince pies, use all butter puff pastry and let them rest for a few minutes before serving them. They’re good by themselves or spread with thick cream or brandy butter.

1 Sterilise your jar(s) either by putting them through the dishwasher (making sure they sit and steam at the end of the cycle) or by washing them in very hot soapy water, rinsing and then heating them in an oven at gas mark 3/160°C/fan oven 140°C. If your using jam jars, boil the lids and dry.

2 Mix all the mincemeat ingredients together in a very large bowl and then spoon into the warm sterilised jar(s). Seal and store in the fridge for at least a week. It will keep well for about a month.

To turn into mince pies, preheat the oven to gas mark 4/180°C/fan oven 160°C. Roll out all butter puff pastry until it’s about as thick as a £1 coin and stamp out rounds using an 8cm cutter (a 375g pack of puff pastry will give you approximately 24 rounds). Line bun tins with half the rounds and fill with 2 tbsp mincemeat each. Brush the pastry edges with milk, cover with the remaining pastry rounds and press down to seal. Brush with milk to glaze and poke a small hole in the top of each pie. Bake for 25–30 minutes until risen and golden. Cool for about 10 minutes before serving warm.