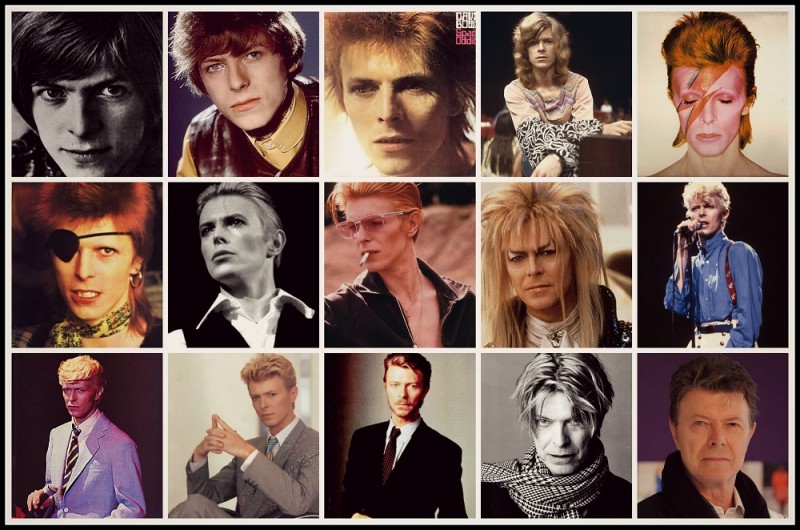 David Bowie: what a career, what a talent. When the news of his death broke on Monday I immediately shelved the piece I had prepared on his recent (and excellent) release, Blackstar. Instead- I now realized with a sinking feeling- I should produce some kind of tribute. Why sinking? Well, how can you encapsulate a career like that in a couple of hundred words and a few songs? Bowie had so many ideas, there are so many highlights, he offers us so many points of departure- where to begin?

Pick the hits and you miss the deep cuts. Pick the deep cuts and you miss the hits. Pick five songs, pick ten songs, and you exclude so much other great work that also deserves to be included. The quality ratio is simply too high. In the end I decided to select a single song from each decade of his career. Yes, it’s arbitrary and it’s inadequate but don’t blame me: Bowie made me do it. He was so good for so long I had no other choice.

His first big hit after a few false starts, “Space Oddity” foreshadows many of the themes that Bowie was to explore in his work over the next five decades or so, with its space imagery and its themes of alienation, melancholy and loss. When Neil Armstrong landed on the moon, Bowie was ready with a song about an astronaut who drifts off into space and dies, his last request being that ground control let his wife know how much he loves her.  It’s a great track that still gives me the chills, no matter how many times I hear it.

The 70s were Bowie’s golden decade, a period in which he produced an embarrassment of riches that is unlikely to be equalled anywhere by anyone. To even try to pick a “best song” is absurd, and so I did not try. For the record, my own favorite is “Heroes.” But if you were to pick “Life on Mars” or “Starman” or any number of other tracks I wouldn’t argue with you. For the purposes of this tribute I have selected “Sound and Vision” from Low. Yes, the all-instrumental B-side of that record was a bold step, but with “Sound and Vision” Bowie achieves something perhaps more impressive- he integrates the same experimental ingredients into a perfectly realized pop song so seamlessly that you barely notice he is silent for half of it.

The 80s, of course, were a problematic decade for Bowie-  creatively, at least. Yes he had immense success and he made a lot of money, and it is true that Let’s Dance has three great songs on it. But what followed was dismal in comparison to his 70s output. Bowie was more aware of this than anyone and decisively turned his back on his Phil Collins/Elton John phase in 1988 with the notorious Tin Machine LP and its two follow-ups. Critically reviled as these records are today, they were apparently necessary as a course correction as they set the stage for a creative revival in the next decade.

However it was 1980’s Scary Monsters that loomed largest over his later career, as pretty much everything he did would be measured against it as the last officially “great” David Bowie record. That was probably a bit annoying if you were David Bowie. But Scary Monsters is indeed pretty great. It spawned the fantastic “Ashes to Ashes”, and also “Fashion” which I selected here for the bizarre and berserk contributions of guitar experimentalist Robert Fripp. How many other top 5 singles can you name that are slathered with so much glorious, avant-garde noise?

One day Bowie’s 90s output will receive a much-deserved reappraisal. A few years ago in this very parish I made a stab in this direction with a defense of Black Tie, White Noise which sets Nile Rodger’s hit-making instincts against Bowie’s insistence on inserting angular sax squalls and blasts of jazz  trumpet into otherwise upbeat cuts of future funk. Outside and Earthling are also full of interesting ideas, experiments and good songs. …hours, which was released at the end of the decade more or less slipped through the cracks completely, but it was on this record that the melancholy present in Bowie’s music since “Space Oddity” started to emerge more strongly. In “Thursday’s Child” in particular he sang about aging and regret with a disarming and affecting frankness that was all the more  surprising given that he had spent the previous three decades switching out one mask for another.

Heathen marked Bowie’s first collaboration since 1980 with Tony Visconti, who had produced his legendary 1970s work. It was well-received, it sold better than …hours and there are indeed lots of great songs on this record. If no longer the hit machine he had been, Bowie was squarely back in the public eye and the recipient of critical acclaim. As always, interesting collaborators are present, including the jazz guitar texturalist David Torn and bass legend Tony Levin. One song that stands out for me however is “Everyone Says Hi.” It may sound perky on first listen but it is in fact a reflection on the difficulty of accepting that a dead friend is truly gone. That feels pretty appropriate right now, I’d say.

Which brings us to Bowie’s sixth decade of activity: I received Blackstar in the mail on Friday when it was released, and listened to it throughout the weekend. What was already a great, late period Bowie record now emerges as a perfect final statement, a suite of songs that explode with vitality even though they were written and recorded by a man who knew he was dying. Lyrics which seemed  almost willfully cryptic and enigmatic before Monday’s news are now painfully clear: the cosmic imagery and  sense of melancholy are present as they were on “Space Oddity”, only it is now Bowie and not Major Tom who is drifting into darkness. The aggressive, beat-driven tracks on Blackstar are wonderful but for this final song I’ve picked the more understated “Dollar Days.” There’s something in his voice, and the sound of Bowie’s familiar strum on the acoustic guitar and the references to English evergreens that remind me of the gentler songs on his second, self-titled LP from 1969- such as “Letter to Hermione”. It’s not a mode he revisited very often. Here however it comes with a declaration of defiance. Bowie had travelled so far, and now, even at the end of his days, he did not rest. He remained committed to creating new things, to reinvention, to mystery:

Fantastic stuff. Thank you, Mr. Bowie. Thank you for all of it.