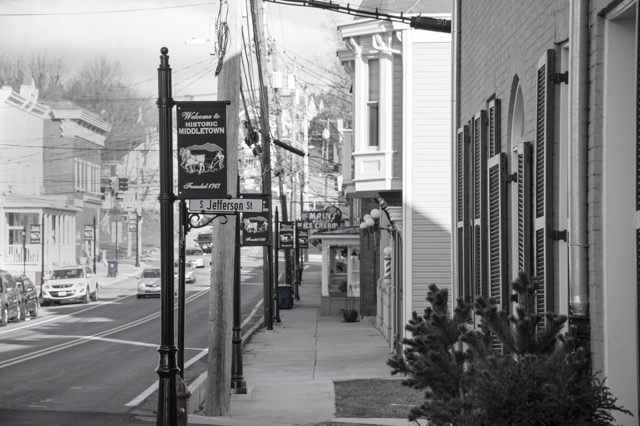 In her latest letter from America, ex-pat Rita discovers a place where all the country’s problems seem very far away…

When I heard the bells I knew. After so many years in the New World I had finally found it: America’s Shangri-La. At first I thought it was the bell chimes ring-tone of my phone. But the screen stared back at me silent and blank. The contractor I was talking with on the front porch of my daughter’s new home chuckled at my confusion. “It’s the church bells,” he said. I turned towards the ethereal white steeple of Zion Lutheran Church on Main Street. From where we stood on a rise above the town it seemed to float over the rooftops, the building that tethered it to the earth invisible. We both stood quietly and listened to the bells, only resuming our conversation when they stilled. I was in Middletown, Maryland, a small town whose very name suggests both the geographic and mythic heartland of America.

Since my daughter and her family moved to Middletown last month I’ve been spending two or three days a week there taking care of my two youngest grandsons. Only thirty miles from the Washington D. C. suburbs it is worlds away in atmosphere. Driving north there is a point where the highway pops over a hill to a sudden panoramic view of the mountains of Western Maryland. At the same moment my radio crackles and loses touch with the stations of the nation’s capitol. Most mornings the scenic view is shrouded in drifts of fog, the mountains a blue haze, and it is hard to tell where they end and the heaping clouds begin. The highway bends west away from the city of Frederick and I turn onto Route 40, the Old National Pike, the very first national highway built in 1811. This road winds up and down through Braddock Heights, a mere hint of a town, and then drives straight for Middletown.

At the traffic lights on the outskirts of town you could stop at a small strip mall, the last bastion of typical suburban retail before entering the old town. Middletown is mercifully free of fast food establishments, unless you count Subway, but it is wedged into a tiny corner of a garden center building and can easily be overlooked. Along the road into town twentieth century ranch houses gradually give way to beautiful, spacious Victorians. Driving through this stretch of town is like viewing a sampler of Victorian domestic architectural style. No two are alike. Here the generous bay windows, the dentil molding, the fanciful turrets, there the columns, the deep wraparound porches, the decorative gingerbread trim. All are set back from the road by wide lawns. I imagine the crinoline-skirted women of the Civil War era gathered here to watch the soldiers of the Union and Confederate armies march by. Both armies passed this way at various times during the Maryland Campaign and no doubt there were sympathizers for both on these porches and sweeping lawns. Now Main Street turns a corner offering a direct view of Zion Lutheran, a gleaming white gem amid an assortment of historic buildings in various states of repair which comprise the town center. 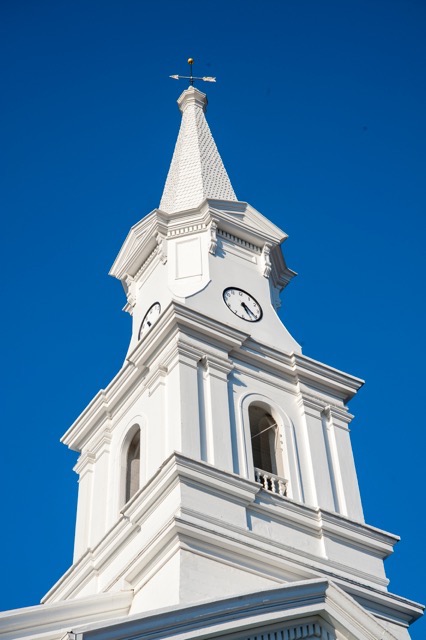 “Turn left after the graveyard and then right opposite the church.” Those were the old-fashioned directions I followed on my first visit to my daughter’s house in a cul-de-sac of twenty-first century homes on a hill overlooking Main Street. Those Victorian houses may be beautiful and tempting, but a modern floor plan was deemed essential for a busy household with four young children. After all, Victorian children would have been confined to the nursery garret with the servants, coming down to greet Mama and Papa in the parlor for a few minutes each evening. Watching my grandsons careen through the house with abandon I can’t imagine them co-existing with a fussy, knick-knack strewn Victorian interior.

Middletown’s history goes back much further than its Victorian heyday. English and German farmers settled the valley from the early 18th century on. The property that became Middletown was named for the obvious reason that it is situated exactly halfway between the Catoctin Mountains to the east and South Mountain to the west. The town boasts association with no fewer than four presidents. As a young Lieutenant George Washington surveyed the Middletown Valley and deemed it one of the most beautiful places he had ever seen. It also won the praise of President Andrew Jackson who described it as “one of the most favored and delightful spots on earth.” In 1862 during the Civil War Rutherford B. Hayes and William McKinley both fought at Fox’s Gap, one of the battles for South Mountain. Hayes was severely wounded and nursed back to health in Middletown where many of the homes were turned into hospitals. Three days later at Antietam, just 15 miles away, the bloodiest battle of the war would overwhelm Middletown with the numbers of wounded soldiers carried there from the battlefield.

Today such scenes are hard to imagine in this quiet peaceful place that “prides herself at retaining small-town charm and ideals in an era of growth,” in the words of the town’s website. The businesses in town include the expected: an antiques shop, an ice cream parlor, and a neighborhood restaurant (the superlative Main Cup). But there are a few eccentric anomalies. Driving north on the Old National Pike you can stop in at Rudy’s Welding Service and Cold Beer. “What sort of welding do they do?” I asked a resident. “Oh I don’t think they get around to much welding,” she replied. At the other end of town, appealing to a different demographic, the liquor store advertised a combination wine-tasting and pet adoption event.

Perhaps we have found America’s Shangri-La, that mythic ideal small town where “all the women are strong, all the men are good looking, and all the children are above average,” in the words of Garrison Keillor. A place where all the nation’s problems, urban decay, poverty, racial strife, and gun violence, happen far, far away. The church bells tell me so. But I remember that in literature and film the American small town has its dark side: malicious gossip, family secrets, racial exclusion, thwarted ambitions, a longing to escape to the wider world, and plenty of murders. Hang out at The Main Cup long enough and no doubt you will hear all the town’s dirty laundry aired. One of my brothers tempered my enthusiastic Facebook post with a two word comment: “Peyton Place.”

As for the little boys, a new friend on the cul-de-sac has a trampoline in his back yard. They think they have found paradise.

One thought on “Middletown: America’s Shangri-La?”