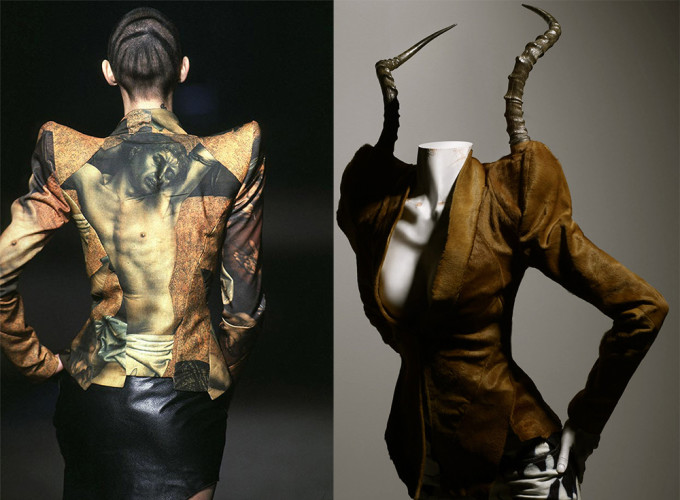 Commercial yet contrarian, Lee Alexander McQueen CBE (17 March 1969 – 11 February 2010) inhabited a parallel world to most of those around him. Being so rapidly catapulted from council house kid to multi-millionaire couturier must have been psychologically unsettling, but his morbid feelings were sadly compounded by the rigorous demands of his trade, by bereavement and a bad drug habit. Referred to in the V&A’s new exhibition Alexander McQueen: Savage Beauty as ‘an artist of the Romantic Movement,’ he described himself as a “romantic schizophrenic.” The only constant in his life was creativity. A Savile Row trained tailor, McQueen left school at 15, went on to study at Central St Martins, invent the bumster, reinvent the frock coat and head Givenchy Haute Couture. He experienced a meteoric rise to fashion fame. But behind the façade, the real man was deeper than the darkest of any of the fantastical designs from his collections.

On the preview day, visitors to the exhibition (mainly female) had clearly dressed up for the occasion, which was obviously of great significance to them. A frustrating fact is that you can’t take photographs in the V&A’s hallowed halls. It’s a shame as photographs have become a way to remember the main events in both a human lifecycle and across generations: A trend that started in the 19th century, an era that seems to have been the major source of inspiration for Alexander McQueen. The ban is a feature of which you are constantly reminded as you find yourself prisoner to the beady eyes of the V&A’s anti-cellphone security guards – a facet of the V&A that tempts the rebellious to do their utmost to beat the system and defy the photography police. Frankly, it’s not worth the bother – there are so many press photographs already in circulation. Nevertheless, it would have been nice to share some of the visitors’ responses to the show – let alone their outfits.

The show has been restaged and is (fittingly for a London boy) even larger than the original 2010 exhibition at New York’s Met Museum. McQueen often visited the V&A to conduct research in the textile collection and was greatly inspired by the Arts and Crafts outfits on show. He once described the museum as somewhere he’d “like to be shut in overnight.” He would certainly have enjoyed some of the rooms created in his memory. The opulent antiqued mirrors of the Romantic Gothic room housing some of his most melancholic designs, including Victorian mourning inspired dresses and, perhaps, hearing the soundtrack of Handel, orchestrated to mirror the majesty of his heirloom creations. McQueen loved to tell a new story each season, and the exhibition presents his radical and fearless vision, as well as the raw emotion woven into his elaborate storytelling. With his aim “to demolish the rules but keep the tradition” of fashion, one wonders, if he were still alive, which party McQueen would have voted for in the forthcoming election.

The exhibition was created in collaboration with some of the key people involved in the production of McQueen’s shows from 1996 onwards. Though impressive looking, the display casing for his ‘primitivist’ designs – a synthetic resin ossuary –  would not have been adequately naturalistic for McQueen, who would surely have insisted upon creating a British (nay Scottish) equivalent of Rome’s Capuchin Crypt, replete with genuine human bones. And the banning of real flowers on some of the dresses (due to health, safety and conservation issues) in favour of dried ones is the antithesis of everything McQueen stood for. The very reason he chose the flowers in the first place was to highlight their transience. Flowers die. But this manufactured representation will live on for the duration of the show, and no doubt for many more to come.

Bureaucratic consensus decision-making and health and safety notwithstanding, curator Claire Wilcox has done an awesome job on both the exhibition and the accompanying book – though the print quality (especially the photography) in the not inexpensive catalogue is not great: All the more reason to visit the show. Simply marvel at the magnificent tailoring and complex use of materials from the softest of tulle silks and pheasant feathers to hard-edged razor clam shells, coral, jet and hand painted microscope slides. Lose yourself in McQueen’s mesmerizing and macabre studies of history mixed with street culture. “Clothes don’t come with a notepad – it’s eclectic. It comes from Degas and Monet and my sister in law in Dagenham,” he said. But also from Victorian memento mori, his Scottish heritage, taxidermy, tribal art, cabinets of curiosity, kimonos, religious iconography and psychiatric hospitals.

Whilst McQueen experimented with new techniques and was at the forefront of digital printing and fashion technology, he was also fascinated by creative techniques from the past. One of the most breathtaking pieces in the show is an installation featuring Kate Moss wearing an ethereal gown from the Widows of Culloden show in 2006, which employs the 19th century Pepper’s Ghost illusion technique.

For those seeking glitz, there are Swarovski crystals aplenty. And there are so many videos you could spend a day under their spell. Plus beautifully crafted accessories galore, from Philip Treacy’s millinery sculptures to many versions of the now legendary 30cm heel Armadillo shoe from McQueen’s acclaimed Plato’s Atlantis collection. Some pieces have been especially reconstructed for the exhibition, including a chainmail Yashmak from the Eye S/S 2000 collection, which will become a part of the V&A’s permanent display. Some of the key themes and exhibits can also be viewed via a special online museum. Oh, and not forgetting the McQueen memorabilia megastore. 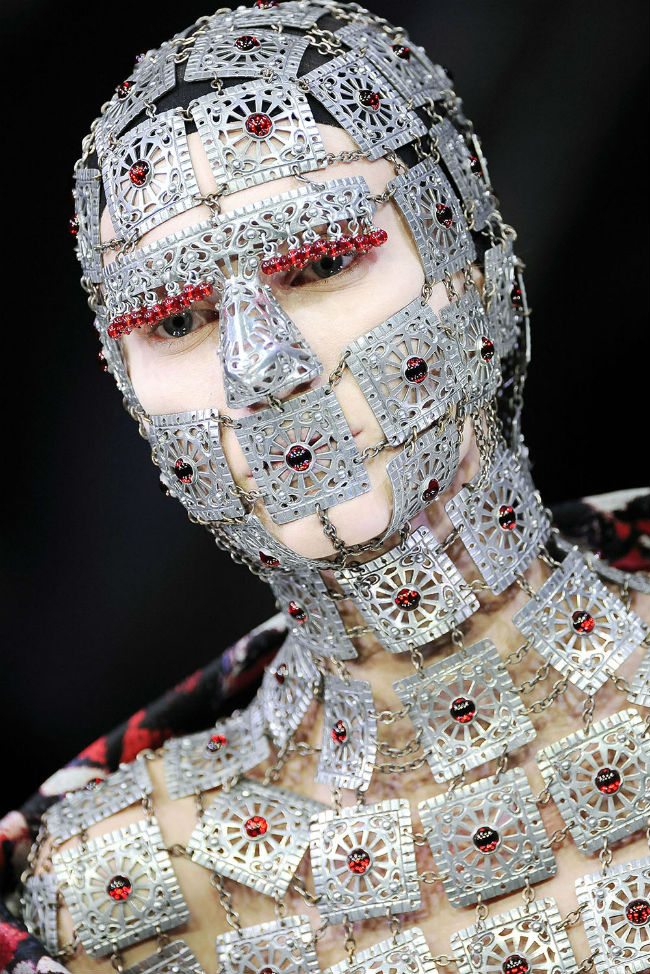 Fortunately, the sheer brilliance of McQueen’s work transcends its luxury storefront and well oiled merchandising machine. This is one of the most extraordinary, extreme and moving shows you will ever see: And see it you must. Regardless of the hype, just go and soak up the artistry and the craftsmanship – and be inspired by the ghost of the genius that was Alexander McQueen. This is sublime.

Alexander McQueen: Savage Beauty is at London’s Victoria and Albert Museum until 2ndAugust, 2015.