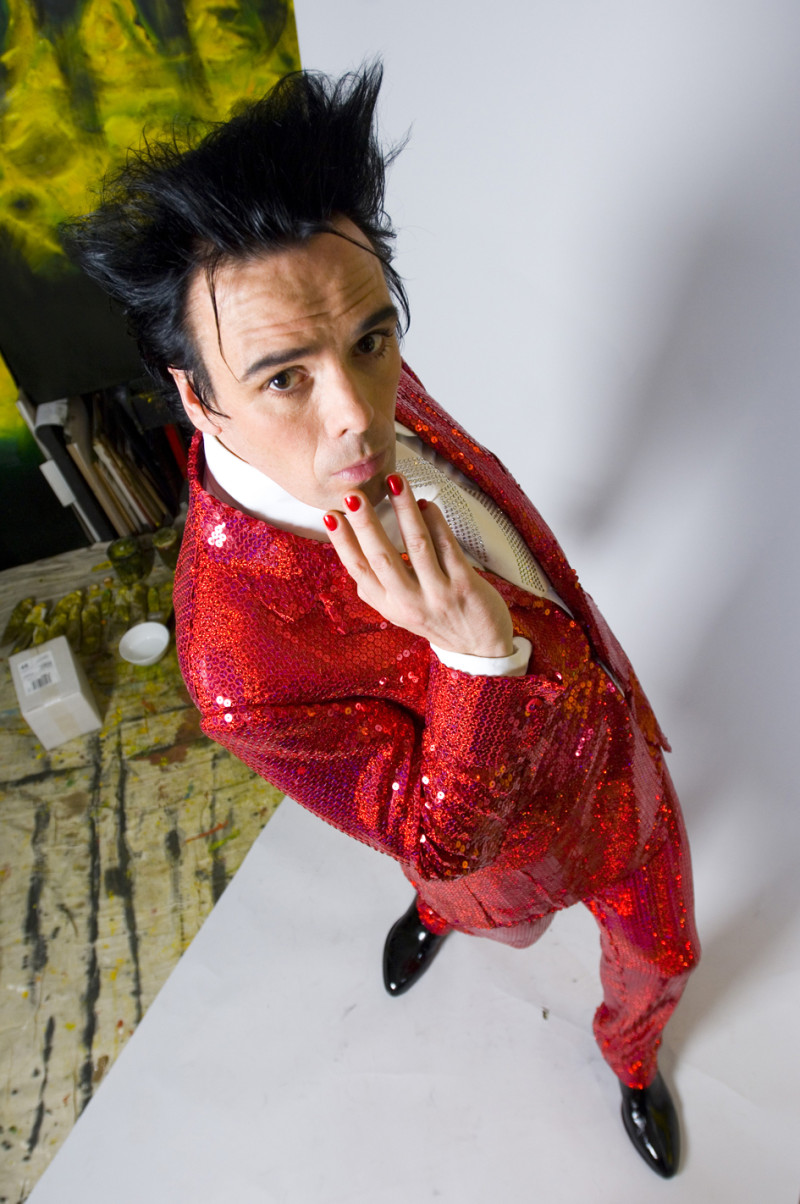 One of the most experienced tailors in Savile Row, Anderson began his career with an apprenticeship at Huntsman, a far cry from his Watford comprehensive school. Anderson explained how he uses the late 19th century Thornton system of tailoring, based on the riding coat, with one button at the waist and high pockets, designed to make the wearer look taller and slimmer. Each bespoke suit takes around 80 man-hours to create by hand, with several fittings in the process. 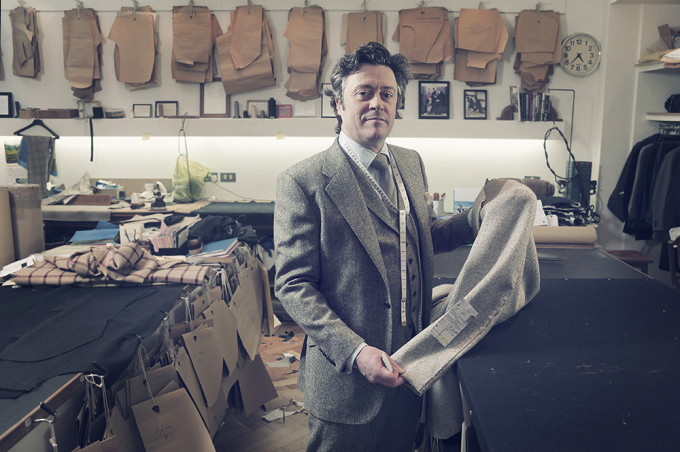 Around 50% of Anderson’s business is for export, and his customers include business people and celebrities such as Simon Cowell, George Michael and Hollywood film stars (the late Gregory Peck was one of his clients). We won’t compromise Richard by mentioning some of his customers’ requests for “stash” pockets and their possible uses, but there’s one story that we will share.

This is the history of the red sequinned suit now residing in Viktor Wynd’s Museum, which formerly belonged to the controversial artist and writer, Sebastian Horsley. It started out with a black sequinned suit that Richard made for Charlotte Church within the space of two weeks – not, as it happens, in the Savile Row bespoke tradition, but using a machine to put in the shoulders and sleeves. Richard had the idea to put a black sequinned man’s version of the jacket in the window because it had the “wow factor”- a strategy which paid off, as Bryan Ferry subsequently bought one. Horsley, who had just completed his Dandy in the Underworld book, saw Bryan’s suit and wanted one for himself – but with red sequins. 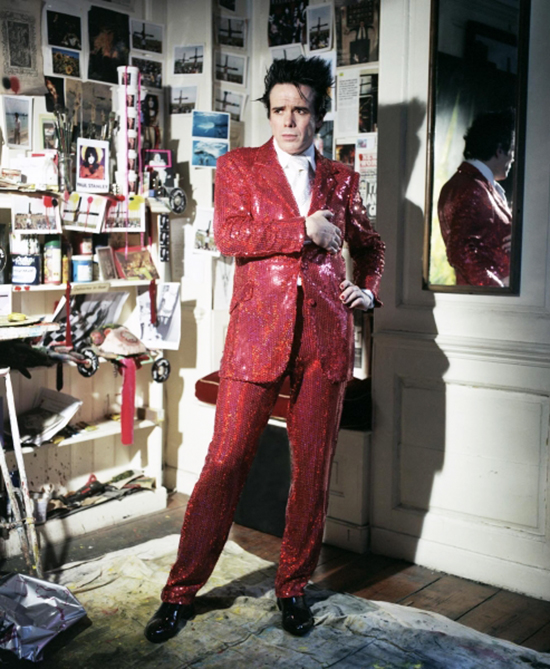 Fenella Hitchcock, who catalogued the Museum of London’s acquisition of clothing and ephemera belonging to Sebastian Horsley was also on hand to share some of her research. A postgraduate student at the London College of Fashion, she is currently working on a dissertation named after Horsley’s 2007 show at the Spectrum gallery, “Hookers, Dealers and Tailors” – three things that featured significantly in his life. A drug addict who was sexually and sartorially promiscuous, Horsley died of a heroin overdose at the age of just 47.

“A man with no talent should have a tailor,” said Horsley, who actually had many tailors.  As part of her research, Fenella has been interviewing people left suits by Horsley. Some of these are very stained, serving as a useful memento mori of his exploits. Horsley’s shirts were always from Turnbull and Asser, with a trademark 5 inch collar point and covered buttons (apparently he was the only customer to ask for covered buttons). Some of those left clothing by the degenerate dandy still regularly wear them. In fact, Viktor Wynd wore the red sequinned suit bequeathed to him by Horsley’s widow to a party, before having a replica made. The original suit is easy to spot among the exhibits in the museum. 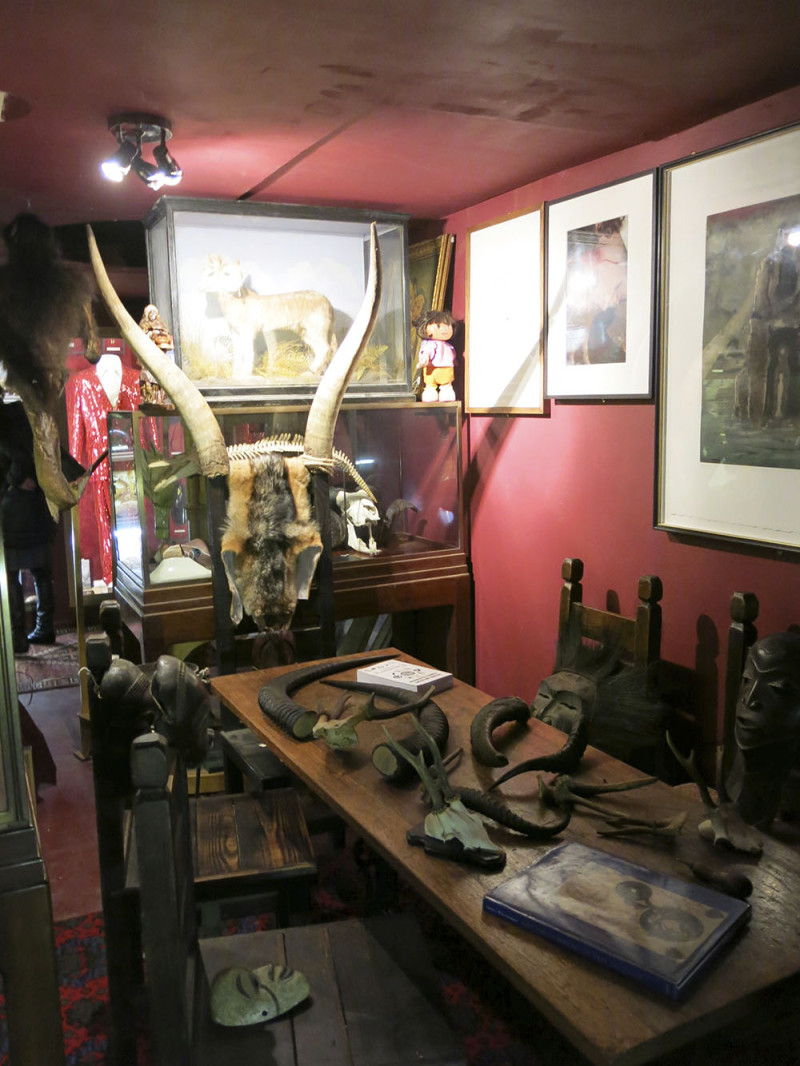 Apparently, Horsley was very Edwardian in some of his ideas – and certainly in his fashions. He wore double-breasted jackets and coats with bold lapels – some with 15 buttons on the front. He was often seen in a large top hat and a high waistcoat. His artfully balanced and well-cut bespoke clothing helped him display his personality.

Anderson believes that Savile Row is starting to change. The introduction of more contemporary styles by the likes of Richard James and Oswald Boateng, combined with the takeover of some of the traditional businesses by Chinese conglomerates has brought a new flavour. The quality is not so good, as many of the Chinese companies have acquired a flagship store simply to roll out the brand name in China. But on the plus side, there is increasing interest in men’s fashion. Gieves and Hawkes is as current on the catwalk today as Huntsman was in the ‘60s and ‘70s. And, of course, Savile Row still offers the best suiting in the world. That’s why at least 20 students a week apply for a job at Richard Anderson alone. It’s refreshing to know there is still a demand for bespoke tailoring in the 21st century… and long may there continue to be role for the master craftsman tailor.