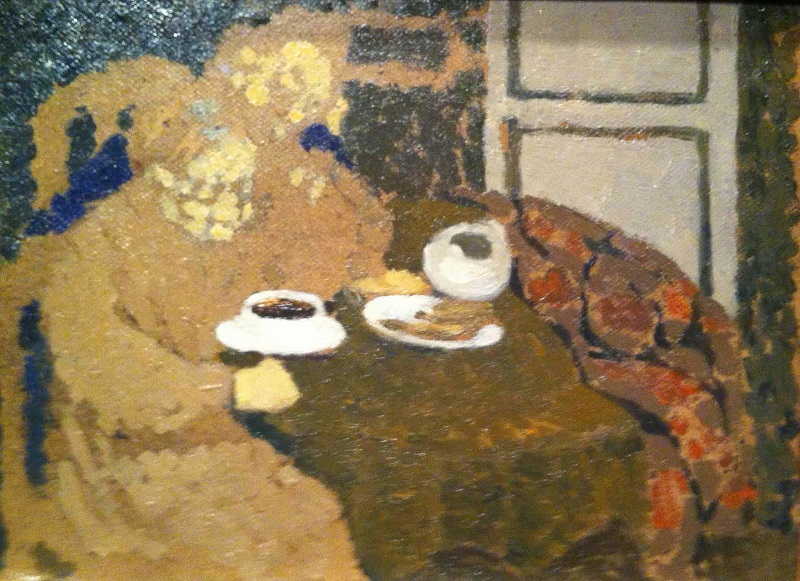 Nige reflects on a poem about a painting…

I only recently came across the word Ekphrasis (adj. ekphrastic), but I’ve been enjoying Ekphrasis, all unknowing, for many years. It describes a work of art (or part of one) whose subject is another work of art – from Homer on the shield of Achilles to Keats on that Grecian urn, Walter Pater on the Mona Lisa… and, by way of a more recent example, Thom Gunn on a painting by Edouard Vuillard (which I’m pretty sure must be the one above). Ekphrasis lends itself very well to the blog form – painting and poem together in one place.

Gunn’s poem – strongly formal and controlled, neatly divided into two unequal parts, 8:12 – begins with his remembered love of the painting and what he saw portrayed there; then, after the break, contrasts it with his own experience of growing older. Age, Gunn finds, is not as it seemed in the picture, ‘not simpler’ – but at least it is not ‘less enjoyable’.

Looking about him on the steps of the National Gallery (in Washington, DC, where a Vuillard exhibition was held in 2003, the year before Gunn’s death), he finds the world still vividly present, ‘pungent and startling’.

The painting, which he ‘loved’ (past tense), has actually told him nothing about growing old – why should it?- but it has gifted him an image, and the seed of an ekphrastic poem.

Two dumpy women with buns were drinking coffee
In a narrow kitchen—at least I think a kitchen
And I think it was whitewashed, in spite of all the shade.
They were flat brown, they were as brown as coffee.
Wearing brown muslin? I really could not tell.
How I loved this painting, they had grown so old
That everything had got less complicated,
Brown clothes and shade in a sunken whitewashed kitchen.

But it’s not like that for me: age is not simpler
Or less enjoyable, not dark, not whitewashed.
The people sitting on the marble steps
Of the national gallery, people in the sunlight,
A party of handsome children eating lunch
And drinking chocolate milk, and a young woman
Whose t-shirt bears the defiant word WHATEVER,
And wrinkled folk with visored hats and cameras
Are vivid, they are not browned, not in the least,
But if they do not look like coffee they look
As pungent and startling as good strong coffee tastes,
Possibly mixed with chicory. And no cream.