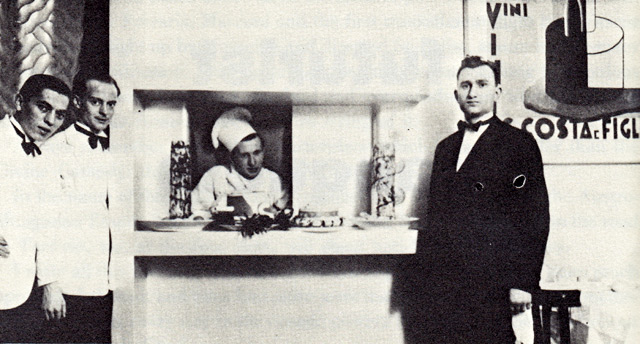 Heston Blumenthal? He’s old hat. These chaps were into molecular gastronomy over 80 years ago. Another bizarre article from Wikipedia unearthed by the Wikiworm.

Futurist meals comprised a cuisine and style of dining advocated by some members of the Futurist movement, particularly in Italy. These meals were first proposed in Filippo Tommaso Marinetti and Fillia’s Manifesto of Futurist Cooking, published in the Turin Gazzetta del Popolo on December 28, 1930.

The Futurist movement recognized that people “think, dream and act according to what they eat and drink” so cooking and eating needed to become subservient to the proper aesthetic experience that Futurism favored. Revolutionary in its expectations of overturning set patterns, some of its more interesting ideas for the realm of cuisine were:

The Manifesto of Futurist Cooking also proposed that the way in which meals were served be fundamentally changed. For example:

One of the proposed settings for these “perfect meals” incorporated the Futurist love of machinery. The diners would eat in a mock aircraft, whose engines’ vibrations would stimulate the appetite. The tilted seats and tables would “shake out” the diners’ pre-conceived notions, while their taste buds would be overwhelmed by highly original dishes listed on aluminium cards.

Traditional kitchen equipment would be replaced by scientific equipment, bringing modernity and science to the kitchen. Suggested equipment included:

The Italian public was not won over by Marinetti’s manifesto regarding cuisine. Immediately following its publication the Italian press broke into uproar. Doctors were measured in their response, agreeing that habitual consumption of pasta was fattening and recommending a varied diet; but the Duke of Bovino, Mayor of Naples, was firmer in his views: “The angels in Paradise,” he told a reporter, “eat nothing but vermicelli al pomodoro [fine spaghetti with tomato sauce].”

Marinetti replied that this confirmed his suspicions about the monotony of Paradise.

The Futurists amused themselves and outraged the public by inventing preposterous new dishes, most of which were shocking due to their unusual combinations and exotic ingredients. For example, mortadella with nougat or pineapples with sardines. Marinetti wanted Italians to stop eating foreign food and to stop using foreign food words: a bar should be calledquisibeve (literally, “here one drinks” in Italian), a sandwich should be called traidue (between-two), a maître d’hôtel aguidopalato (palate-guide), and so on. Elizabeth David, the cookery writer, comments that Marinetti’s ideas about food contained a germ of common sense, but behind his jesting lay the Fascist obsession with nationalism. Marinetti wanted to prepare the Italians for war. “Spaghetti is no food for fighters,” he declared.

One Futurist dessert, called Italian Breasts in the Sunshine, features almond paste topped with a strawberry, then sprinkled with fresh black pepper.

Another entry in the cookbook describes a Tactile Dinner. Pajamas have been prepared for the dinner, each one covered with a different material such as sponge, cork, sandpaper, or felt. As the guests arrive, each puts on a pair of the pajamas. Once all have arrived and are dressed in pajamas, they are taken to an unlit, empty room. Without being able to see, each guest chooses a dinner partner according to their tactile impression. The guests then enter the dining room, which consists of tables for two, and discover the partner they have selected.

The meal begins. The first course is a ‘polyrhythmic salad,’ which consists of a box containing a bowl of undressed lettuce leaves, dates and grapes. The box has a crank on the left side. Without using cutlery, the guests eat with their right hand while turning the crank with their left. This produces music to which the waiters dance until the course is finished.

The second course is ‘magic food’, which is served in small bowls covered with tactile materials. The bowl is held in the left hand while the right picks out balls made of caramel and filled with different ingredients such as dried fruits, raw meat, garlic, mashed banana, chocolate, or pepper. The guests cannot guess what flavor they will encounter next.