A shortish Diary this week to welcome you to the new-look Dabbler. I’ve been busy – though not as busy as Worm, who has worked tirelessly in his spare time to drag this beloved blog into its latest incarnation. You will know that we were down for more than a week; what you may not know is that prior to that we had been subject to a series of hacks, malware attacks and general ongoing expensive timewasting misery, such that it would have been odd indeed if we didn’t at dark moments wonder whether keeping the old D going was really worth the bother.

(After the second debilitating hack in September, which occurred just after I’d spent a late night putting a Nick Groom post together just in time for Michaelmas, I observed to Gaw that I felt death, however agonising it might be, was too good for the fat spotted virus-making geekgits who so pointlessly vandalise people’s labours of love. He replied that they already live in a Hell of their own making, which did console me.)

But here we are again, and if you’re glad about that then you should point your thanks Worm’s way.

We’re not quite finished on the rebuild. There’s a fair bit of mechanical work behind the scenes to do, on the archives, profiles, all sorts of links and widgets. The biggest innovation is The Squabbler, which will be a sort of blog-within-a-blog for short, sharp postages and debate.

In the meantime, the posts will start to roll again. This week we will be bringing you, amongst other goodies, the first parts of a major new series from Jonathan Law on a quite extraordinary family, and we’ve even published an ebook to accompany it. It’s awesome, as you’d expect from JL.

Onwards and upwards, and thanks for your patience.

At Temple Meads the other day I bought a copy of The New Statesman to read on the train to Paddington. I don’t often do that because I’m a Spectator subscriber and buying the other one is a bit like going to watch Everton when Liverpool are playing away and vice versa (which is something that in fact my father did do for a bit in the late 1960s – there’s probably an impolite word for it). But I wanted to read Grayson Perry’s piece about the ‘Default Man‘, as Perry can be quite witty and insightful.

Should have saved my money. The thesis, such as I can make out amidst a whole load of scattergun points about two-piece suits and whatnot, seems to be that the British world has been made by and for Default Man, defined as white, straight, middle-class and male, which description apparently fits only 10% of the population. To which the reply is: ‘And?’

Let’s take those elements in turn. First, for simple reasons of demographics it would be mighty curious if the majority of the influential people in Britain’s long history weren’t white. Given the percentages, it would also be odd if they weren’t mostly heterosexual. As to ‘middle-class’.. well what about the toffs? That leaves us with ‘male’. So, to sum up, society is traditionally patriarchal. Meh.

Both of my daughters are keen artists. My five year-old C combines a keen eye and steady draughtsman’s hand with an unfathomable mind. “I’m going to draw God,” she announced the other week. “Very well,” I said, keen to see what she’d come up with. I could not have anticipated the result, which turned out to be a sort of Holy Trinity. When I asked her to explain the picture, she answered with weary patience. “That’s God on the Inside, that’s God on the Outside, and that’s God with His Shoes and Gloves on.” Behold: 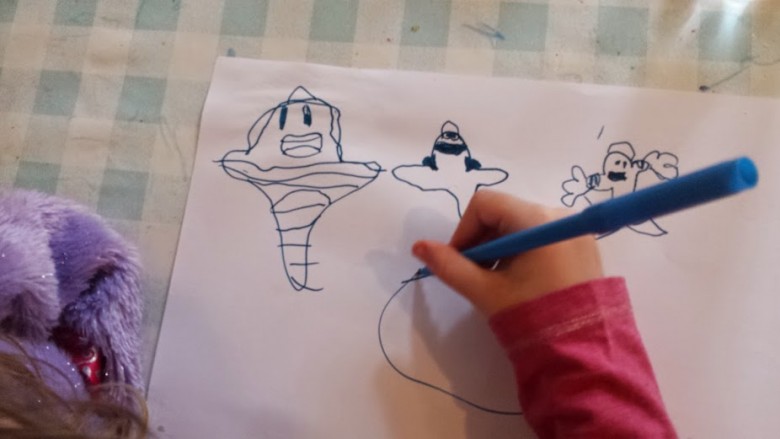 Last week I had a dose of food-poisoning (some Mexican chicken thighs, I think). I woke up on Sunday morning and quickly realised I was in trouble. A couple of immodium tablets later I fell into a strange and delicious sleep which lasted for many, many hours and I dreamt dark, bowelly dreams.

I dreamt that I was lying submerged just below the surface of a shallow pool with the weight of a skinless elephant pressing me down. I dreamt of Ethrelfroth, the Stinking King of some medieval realm, whose throne doubled as a commode and who sat all day delivering justice between twisted bouts of neck-stretching excretion. I dreamt of Obi Wan Kenobi, whose death left no corpse, only a brown robe descending, the soft collapse of which filled me with unnameable horror as a child. But in my dream a giant painted doll’s face lay amongst the brown folds, which were on the pavement outside Buckingham Palace, and then the pavement itself collapsed and down the face and robes tumbled to another pavement, and another and another, taking my stomach with them. I dreamt of The Three Faces of God. I dreamt, at last, of nothing.

And when I woke up I felt a lot better, and I had a piece of toast. With marmite.

Brought to you by Dabbler Editions – original e-books for Kindle. Buy Blogmanship: The Art of Winning Arguments on the Internet Without Really Knowing What You Are Talking About now.

20 thoughts on “Dabbler Diary – The Three Faces of God”