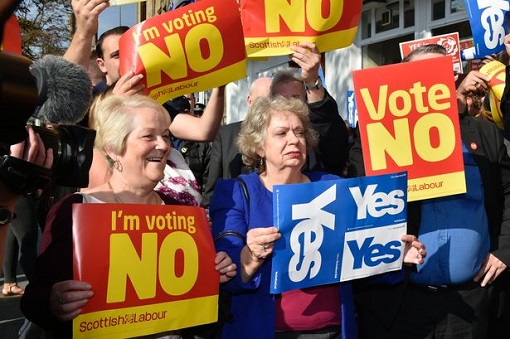 So, The Day of Reckoning has finally arrived. As Scots – or rather, current residents of Scotland – head to the polling booth with the fate of the Union on a knife-edge, our own Daniel Kalder explains, particularly for the benefit of non-Britons, what the hell is going on with the Scottish independence referendum…

As a Scot living abroad, I am often asked questions about my homeland and its relationship with England. Indeed, for the past couple of weeks I have been fielding questions from friends, neighbours and colleagues here in Texas, all of whom are completely baffled by reports of the possibly imminent dissolution of the United Kingdom. So for those perplexed by all this independence malarkey, I decided to answer all the most important questions on the topic in one E-Z cut out n’keep guide. Let’s go!

1) Is Scotland a country, or what?

I’ve been asked this many times in both Russia and the United States, even though both countries have a federal system and the idea of a large entity made up of smaller entities should be easy to grasp. Maybe that’s the problem: Scotland is not a state, or a province- it’s a country, only it’s a country that joined with three other countries to make a kind of mega-country with (until recently) one parliament. Kind of like The Beatles, where England is John, Scotland is Paul and… I’ll let the Welsh and Northern Irish decide who gets to be Ringo.

2) So why did Scotland unite with England?
When Queen Elizabeth I died, her nearest Protestant relative was King James VI of Scotland, so he was invited south to make sure Catholics didn’t take over. Scotland retained its own parliament until a century or so later when the country went bankrupt following a disastrous attempt to colonize a wet jungle full of mosquitoes. The English bailed us out and many Scots have never forgiven them.

3) So have the English really oppressed the Scots, then?
Actually they invited us to join them in subjugating other less technologically advanced peoples around the world. We Scots were over-represented in the colonies, as well as in the parliament in London. Glasgow was the empire’s second city. Since 1707 the UK has had eleven prime ministers who were either Scots-born or of Scottish extraction. And of course, much of the hierarchy of the last Labour government was Scottish.

4) Hm. So if the union worked out OK, why the demands for independence now?
There was much skullduggery involved in 1707 to make sure the Act of Union passed, and some folk are still annoyed about it. Indeed, working on the principle that two wrongs actually do make a right, the SNP has indulged in some skullduggery of its own by disenfranchising all Scots living outside the country, doubtless on the suspicion that those exiles might vote against their cause. On the other hand, the SNP has granted schoolchildren the right to vote, just this once, on the hope that they will vote in favour.

Many of the arguments for independence are rather abstract, and involve waffle about our “dignity” and “self-respect” or metaphors about not being a “surly lodger” anymore. Some individuals are inspired by romantic/nostalgic blather about Highlanders, William Wallace, hairy men painted blue etc. Some too may have been enticed by Nationalist leader Alex Salmond’s promise that after independence nobody in Scotland will ever die, and all shall have chocolate unicorns.

Then there is the economic “argument” that since what remains of the UK’s oil and gas is mostly in Scottish waters, we would end up being one of the richest countries in the world, like Saudi sheikhs, or Norwegians afloat on a sea of free stuff.

The reasons are numerous. My own suspicion however is that for hardcore Nats Freud’s “narcissism of small differences” is in play: “…the phenomenon that it is precisely communities with adjoining territories, and related to each other in other ways as well, who are engaged in constant feuds and ridiculing each other.”

The English and Scots are very alike, and nationalists can’t stand the fact.

5) What would change?
Many financial and governmental institutions have uttered apocalyptic prophecies about looming economic catastrophe. Some of these prophecies may even be true, but it’s hard to believe independence would be quite that awful. Slovakia still exists, after all. At the end of the day: nobody knows. We’d still live on a wet rock and chase after post-communist levels of male life expectancy. Lots of little things supposedly distinguishing us from the English would be exaggerated. There would be more bilingual signs in Gaelic and English, even though nearly all the Gaelic speakers live off the mainland and speak English anyway. Kids in school would be forced to read rubbish novels purely because their authors were Scottish, and some loons might try to force the Scots language on them as a subject.

6) What’s that then?
A synthetic fusion of regional dialects that was pioneered by the unreadable Scottish poet Hugh MacDiarmid. Nobody speaks this “Scots,” nobody ever has, but I once heard a major academic compare its “revival” to that of Hebrew, which was resurrected by the Jews arriving in Palestine in the 19th century and made the official language of Israel in 1948. But the Israelis had no common tongue, so that was necessary. In Scotland we speak the language everyone else in the world wants to speak. There is no comparison.

Meanwhile, if you want a bit of fun, click here and spend some time on the Scots version of Wikipedia.

7) Sounds like you’re not too impressed then?
Meh. Salmond wants an independence that is already heavily circumscribed: as soon as Scotland became completely autonomous he would seek to surrender our newly won sovereignty to the EU, where we would be about as influential as Slovenia. Even then, the EU has been quite clear that they’re not all that keen on this independence lark, and they would make Scotland jump through all kinds of hoops to rejoin. Alex Salmond has blown this off with his trademark insouciance and guaranteed (once again) chocolate unicorns and eternal life for everyone. Then there is all the malarkey about what currency we would use, etc.

But these issues are not the main thing. Everybody knows the campaigns have been pretty awful on both sides. The “Better Together” in particular failed completely to articulate a positive sense of Britishness, preferring instead to ramble on in Gradgrindian fashion about profit and loss. No, I put it like this: if the UK is the geopolitical equivalent of The Beatles, then who the **** thinks any of those guys’ solo careers were remotely comparable to what they did when they were together?

The English have been excellent neighbours and partners. We make a good team. Scottish philosophy and science flourished after the Union, as we produced the likes of Adam Smith, David Hume, James Watt et al. I identify with that heritage. The Union has also supplies us with the pleasures of a dual identity. I think it’s marvellous that I can be Scottish and British at the same time, and access both my native and a wider culture from a position of belonging. Why would anybody seek to be deprived of such riches? Indeed, stuck out here in Texas, I am in the process of acquiring a third identity. It’s fun.

We’ve achieved great things together. I am both British and Scottish, and I will still think of myself that way even if the Union disappears – chocolate unicorns or no.

13 thoughts on “The Dabbler’s Guide to Scottish Independence”