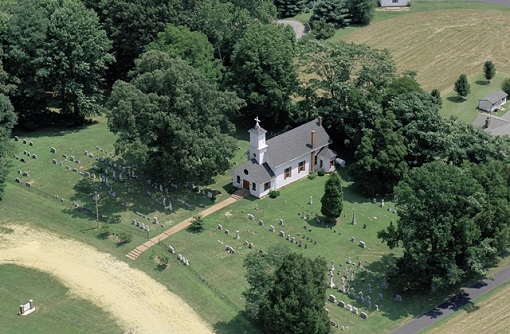 When we crossed the Mason-Dixon line and I saw the Maryland countryside for the first time, I was reminded of England. After five years in California the green, gently rolling Maryland hills dotted with sheep and cattle were like a familiar homecoming. Then the differences asserted themselves. No hedgerows or stiles. And instead of squat stone Norman churches, the view was punctuated by the slender bell towers of tiny white churches that looked as if they had been placed in a toy landscape by a child’s hand.

I’ve always been drawn to church buildings, even participating in a “church crawl” in my youth (that’s like a pub crawl but without the alcohol). The object was to find the best country church for brass rubbing. I still have two brass rubbings from that experience framed on my living room wall above the bookcase where John Betjeman’s Guide to Parish Churches of England and Wales rests among my history books. I think my interest was sparked by school field trips to nearby Greensted Church in Essex, the oldest wooden church in the world. The timbers of the nave, built in Saxon style, date to the eleventh century. We used to get a thrill out of peering through the so-called Leper’s Hole that reputedly allowed lepers to follow the service from outside. The churchyard features the tomb of a magnificent looking Crusader who inspired us to schoolgirl romantic fantasies. Did he really appear out of nowhere, collapsing and dying of his wounds in the church as legend has it? Inside, the hushed simplicity of the ancient space felt like stepping back in time. Though raised a Catholic, I grew to prefer the spare aesthetic of Anglican churches, despite it being the result of the regrettable Reformation “stripping of the altars.” The Catholic churches in Belgium, where I spent time as a child, were an unstripped riot of bleeding statues and gilded extravagance. Maryland’s plain little white churches, even the Catholic ones, are more English in spirit than continental.

Once settled into my adopted state I found myself living just up the road from one of the white churches that had so impressed me when I first arrived. St. Rose of Lima on Clopper Road in Gaithersburg is a Catholic church that dates to the early nineteenth century. In a remarkable example of ecumenical spirit, Francis Clopper, a Protestant who owned a plantation on the Seneca River, built it for his Catholic wife (whose maiden name was Byrne). Under an oak tree in the churchyard is the tombstone of a Confederate soldier who died of his wounds outside the church during the Civil War. The original brick church burned down in 1883 and was replaced by the white wooden building that still stands today. Eventually rapid population growth in the Gaithersburg area necessitated the building of a large modern church alongside the old. But the lovely old church is still used for ceremonial occasions such as weddings and baptisms. It was a baptism that eventually brought me to St. Rose.

When our first child was born my husband and I had no intention of having her baptized. We were both lapsed Catholics and considered it hypocritical to have a child baptized just to please the grandparents. But one day when I was cuddling my baby daughter in my arms I looked at her and, with a rush of horror, realized she was a “pagan baby” just like the pagan babies we collected pennies for in my Catholic primary school. It is hard to imagine now in the age of political correctness, but when we donated the number of pennies sufficient to save one soul we got to color in the outline of a baby, yellow for Asian or black for African. We could choose which souls to save. My donation sheet was a neat page of carefully colored in babies, yellow rows alternating with black. When it came to the fate of souls I was scrupulously fair. It never occurred to us that a white baby might be a pagan in need of saving. But now here I was with a genuine white pagan baby in my arms! When it comes to motherhood the heart rules the head. Perhaps it is all a matter of hormones. Rationally I knew it was ridiculous but emotionally I had to have my daughter baptized. “But what if it’s true after all, she’ll go to Limbo” I pleaded with my bemused husband. With wife and newly minted grandparents now on the same side the inevitable happened. St. Rose of Lima made a lovely setting for fulfilling family expectations and assuaging maternal anxiety.

As for my daughter’s soul, she would probably have been saved anyway. My resourceful mother would have found a way. Some years later she confessed to having sneaked my brother’s infant son into a Catholic church when she was babysitting him. There she baptized him herself with holy water from the font, a form of emergency baptism by a layperson that is supposed to count. At least according to the torturous logic of Catholic doctrine.

2 thoughts on “Two Churches and a Baptism”