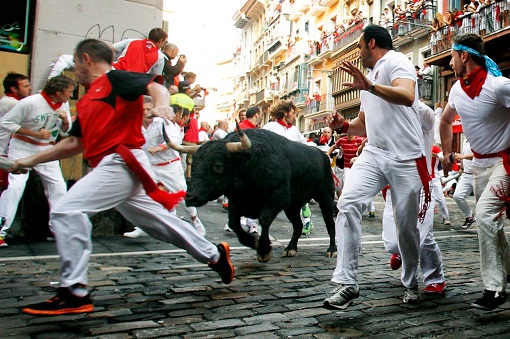 How did Thanksgiving evolve from a simple religious ceremony into a violent shopping stampede?…

Spaniards have their Running of the Bulls at Pamplona; Americans have their Stampede of the Shoppers on Black Friday.  Both are high risk, violent sports that frequently end in severe injury or death.  Black Friday falls on the day after Thanksgiving, the day Americans give thanks to the Almighty for all the blessings He has bestowed on His Favorite Nation.  Thanksgiving rituals include over-eating the traditional turkey dinner, welcoming annoying relatives to the table, watching football, and avoiding conversations about politics with crazy, conspiracy-minded family members.  Then, having bowed their heads in thanks for all their material possessions, over-stuffed Americans rush out shopping to get more.  At least a cynic might describe it that way.  How did Thanksgiving evolve from a simple feast shared by the Wampanoag and the Pilgrims in seventeenth century Massachusetts to the shopping extravaganza it is today? 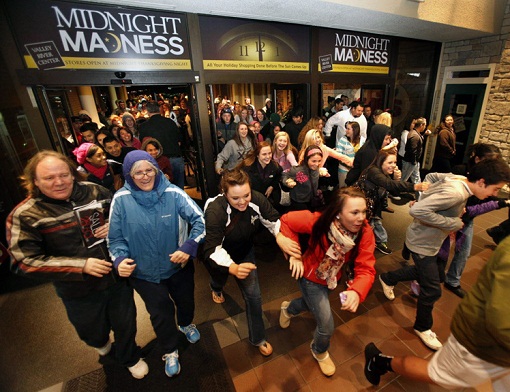 Thanksgiving was originally a religious ceremony, not connected to a particular day but held whenever a ship landed safely in the New World.  The first on record was in Jamestown in 1610.  The early settlers also held Thanksgiving ceremonies after a good harvest.  But it was the story of the Plymouth Pilgrims and Native Americans feasting together in peace and harmony that captured the later American imagination and is traditionally referred to as The First Thanksgiving.  However, this is no more than an appealing myth obscuring the reality of a violent past.  In his book Mayflower Nathaniel Philbrick tells the true story behind the myth.  They didn’t really eat turkey and the uneasy peace soon exploded into the brutal King Philip’s War, which marked the beginning of the end for Native American control of their own country.  Thanksgiving didn’t become a formal National Holiday until President Lincoln declared it so in 1863 in the midst of the Civil War.  It isn’t quite the Gettysburg Address, but the proclamation nevertheless has an august ring to it:

I do therefore invite my fellow citizens in every part of the United States, and also those who are at sea and those who are sojourning in foreign lands, to set apart and observe the last Thursday of November next, as a day of Thanksgiving and Praise to our beneficent Father who dwelleth in the Heavens. And I recommend to them that while offering up the ascriptions justly due to Him for such singular deliverances and blessings, they do also, with humble penitence for our national perverseness and disobedience, commend to His tender care all those who have become widows, orphans, mourners or sufferers in the lamentable civil strife in which we are unavoidably engaged, and fervently implore the interposition of the Almighty Hand to heal the wounds of the nation and to restore it as soon as may be consistent with the Divine purposes to the full enjoyment of peace, harmony, tranquility and Union.

What is consistent between the story of the Plymouth Pilgrims and Lincoln’s proclamation is the belief that American history follows a path “consistent with the Divine purposes.”  But how can the modern Thanksgiving shopping frenzy further Divine purposes?  It is hard to imagine any Almighty Deity caring much about the health of the retail economy.  After all, didn’t He tell us at some point to give away all that we have to the poor?

Try telling that to the hordes who descend on shopping malls across the nation on Black Friday.  Many of them are poor.  They are seizing the only opportunity they may have to participate in consumer culture.  For on this day American corporations lure shoppers with very limited numbers of high-end merchandise sold for practically nothing.  Hence the frenzy.  Only the first few in line will get the coveted flat screen TV or video game box or waffle maker or popular toy.  People line up outside for hours, even overnight, and when the doors open the Stampede of the Shoppers begins.  Black Friday horror stories have become as much a part of the Thanksgiving tradition as cranberry sauce or pumpkin pie.  And in the age of smartphones many of the incidents are caught on camera to add dramatic spice to evening newscasts.  The discount chain Walmart is the most popular venue for the Stampedes.  It was their $2 waffle makers that caused a brawl in Little Rock one recent year.  In 2008 a man was trampled to death in the Long Island store and a pregnant woman suffered a miscarriage.  Another Walmart was the scene of an incident that went viral on social media, when a woman used pepper spray to eliminate her rivals in grabbing a video game player.  She was seen on film wielding her weapon and then walking calmly to the checkout leaving a scene of chaos behind.  But the humiliation of being exposed on national TV caused her to turn herself in to police the next day.  In a more serious incident at a Toys R Us two woman fought over a toy, their husbands pulled guns, there was a shootout, and both men died.  Scuffles, knifings, and shootings in the lines that snake through parking lots for hours are commonplace.  But there is something ugly, too, about more well off consumers, sitting smugly at home with their full price flat screens, sneering at the bad behavior of the Walmart shoppers.

I think it’s high time we refocused our outrage from the War on Christmas to the War on Thanksgiving.  After all, it’s Christmas that is responsible for turning Thanksgiving from a day of family togetherness and giving thanks to an orgy of shopping.  Determined to wring the last possible dollar from consumers’ wallets, the Vast Retail Industrial Complex is gobbling up more and more time to expand the Christmas shopping season.  Before we have even celebrated Thanksgiving this year the stores are full of Christmas decorations with the most annoying of Christmas carols piping in the background.  We’ll be thoroughly sick of hearing them by the time Christmas arrives.  I tried to buy some Thanksgiving themed items for my celebration but there were none to be found.  The turkeys and pumpkins have already been swept away and it is Christmas, Christmas everywhere.  This year retailers aren’t waiting for Black Friday morning to open their doors, but encroaching on Thanksgiving Day itself.  They boast of opening on Thanksgiving afternoon.  So before the dishes are even cleared or the turkey gravy has a chance to congeal, the Stampede of the Shoppers will hit the starting line.  I will remain snugly indoors out of harm’s way.  But I’m not immune to the imprecations of the retailers.  I’ll be doing my Christmas shopping online.

Happy Thanksgiving everyone! And thanks for everything.  Now, what are you getting me for Christmas?

6 thoughts on “The War on Thanksgiving”