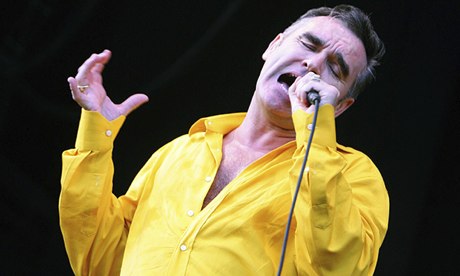 Is there anyone better qualified to comment on the latest publishing sensation than Robert Mighall, Madrid-based writer and brand consultant? There are plenty of huge Morrissey fans out there – but not many are also former editors of Penguin Classics.

I’m about 50 pages into the eagerly awaited, immediately downloaded, Autobiography by Morrissey. It’s too early for me to judge who’s right: The Telegraph who hails it as a masterpiece, up there with Dylan; or The Independent who wonders whether the integrity of the Classics imprint will survive its “droning narcissism”.

This aside, I must confess to being personally torn over Penguin agreeing to publish it under its august Classics imprint. On the one hand I’m a big Morrissey and Smiths fan. He is one of the truly great, perhaps even “classic” singer songwriters of our (or at least my) age. And we need more iconoclasts, especially such iconic ones. Yet I was once the editor of the Penguin Classics series. And I can’t help feeling a tad irked by the principles I steadfastly defended for nearly three years being so spectacularly subverted. Even by a hero.

When I was responsible for the list I was constantly being asked “what makes a classic a classic?”. I usually answered “that which endures”. Time does a marvellous job separating the wheat from the chaff when it comes to art. And most of the stuff people eagerly consume or froth about today, will be winnowed by the cruel winds of time and end up, rightfully, forgotten by the next generations. You’d think the Classics canon was a closed book wouldn’t you? Not a bit of it. Titles that had been staples of my undergraduate syllabus slowly died from lack of sales before my very eyes, shuffling silently out of the list to dusty oblivion. But, like a nightclub operating a one-in, one-out policy, the list was constantly being refreshed with new contenders. For every Smollett that expired under my watch, there was the likes of Conan Doyle’s Sherlock Holmes stories – “unquestionably Classics I hear you cry” – entering to keep the list replenished and relevant. Neither Doyle, nor Jerome K Jerome’s Three Men in a Boat, nor Rider Haggard’s She were Classics before I got there, and who knows what the next generation will allow to join or leave the list. The market, as ever, dictates.

What endures in any art is what remains relevant. And what remains relevant is that which continues to touch us with some core truth. The greatest stories hold up mirrors to their audiences, allowing us to see beneath the fancy dress and language counterparts of ourselves. Our struggles, desires, and dreams. That is one of the themes of my forthcoming book, Only Connect. The title comes from E. M. Forster’s Howards End (which is still in the series, you’ll be relieved to hear). And it partly refers to the emotional connection stories need to create, whether that story aspires to art, or needs to inspire or influence people in the field of business.

And business is the real issue at stake in the “can Morrissey be a Classic on first publication?” debate. Morrissey is a massive pop music brand, Penguin is the only real brand in publishing (go on, try to name another one). The book topped the book lists on its first day. The decision was taken for purely commercial reasons (Morrissey demanded it). Which means it is like every other book on that list. If they no longer sell, they are no longer in the list, and therefore, given Penguin for many defines a Classic, will soon be stripped of this status. Nearly 99% of the authors with whom Morrissey is now rubbing shoulders are out of copyright. The Classics – being royalty free – make a major contribution to Penguin’s business, and therefore Pearson’s profits. We should suffer no sentimental delusions about the role of aesthetics or ethics influencing Penguin as custodian of the canon. “Classic”, whether we like it or not, is largely a commercial consideration.

Storytelling is a currency in all senses. If it connects, it has relevance, and therefore has something to contribute. Either to the Story Business (of which Penguin is a key exemplar), or the Business Story. Morrissey’ as Classic is a business story pure and simple. Whether he still has currency for the generations to come only they and Penguin’s money people can decide.

Would I argue thus for any other contemporary pop artist? Probably not. But then is there such an artist?

You can pre-order Rob’s book Only Connect here and his blog is here.

15 thoughts on “What makes a classic a classic?”