Do you ever feel oppressed by the grinding circularity of the week? I mean the relentless Mondaytuesdaywednesdayness of it. Snags you at the age of four and it’s got you forever, with only a little time off at Christmas when there is a disorienting flurry of bank holidays and you briefly, deliciously, lose track. I expect that even in retirement the grip isn’t entirely loosened – a Thursday will still feel like a Thursday.

This occurred to me while I was visiting The Tate the other week (yes, all right-thinking people do still call Tate Britain ‘The Tate’, thus putting that power station where they keep all the modern rubbish in its proper place). As a ‘history of British art’ the main exhibition is a journey from an attempt to capture Beauty throughout the 17th, 18th and 19th centuries to an attempt to express Horror, from the beginning of the 20th Century. This is unmistakeable but for some reason not mentioned (the anomaly is Blake, one of England’s finest nutjobs, who thought horror and beauty were the same thing and that picturesque landscapes were the handiwork of Satan).

The area around Room 1910 at the Tate should be renamed the Chamber of Horrors, containing as it does this by Epstein and this by Bacon and this about bacon. I was staring aghast at Stanley Spencer’s stomach-churning The Resurrection, Cookham when an elderly couple hurried past. “Ugh, Spencer,” said the lady, motioning as if to ward the painting off. “I can’t even look at it.”

The apex of horror, however, is Mark Gertier’s Merry-go-round: 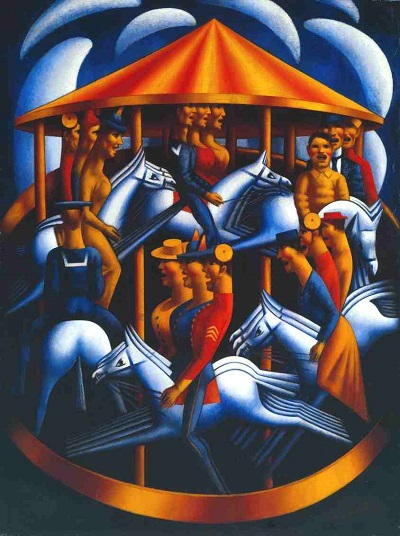 I was familiar with it but vaguely assumed that it was painted just before or during or just after World War II, that the brown shirt was a Brownshirt, and that the palpable disgust with which the image is infused was a Jewish reaction to the Holocaust. So I got a shock when I saw the date.1915! Then later I read DH Lawrence’s letter to Gertier:

Your terrible and dreadful picture has just come. This is the first picture you have ever painted: it is the best modern picture I have seen … I believe there was something in Pompeian art, of this terrible and soul-tearing obscenity … I could sit down and howl beneath it like Kot’s dog, in soul-lacerating despair. I realise how superficial your human relationships must be, what a violent maelstrom of destruction and horror your inner soul must be .

It’s nothing to do with the Nazis at all! It’s just horror qua horror, and the merry-go-round, quite transparently, is Mondaytuesdaywednesday.

“Monday: Humiliation; Tuesday: Suffocation;  Wednesday: Condescension; Thursday is pathetic; by Friday life has killed me.” That’s Morrissey in the quintessential I have Forgiven Jesus, and he’s a pop star so surely only marginally beholden to the weekly cycle.

I was pleased to learn that his autobiography has been published as a ‘Penguin Classic’, because such is entirely fitting with the sublime ridiculousness of the man. Nobody, nobody – not Germaine Greer, not George Monbiot, not even Slavoj Zizek – has sillier views on absolutely everything than Morrissey, and Britain is all the better for it. Morrissey’s miserabilism has long formed a vital strand of the gaiety of the nation. I imagine it’s virtually impossible for non-fans to fathom the value accorded to The Smiths, and for fans it’s difficult to articulate. Like Bob Dylan, Morrissey has an innate gift for lyrics that say what you feel but in a way that you’d never think to say it, and also in such a way that you can never quite tell whether or not he is taking the piss. And as with Dylan, if you’re comfortable with not knowing then the effect is powerful indeed upon the adolescent mind. The difference is that where Dylan’s ridiculousness lies in his obscurity, Morrissey’s lies in his straightforwardness. “Please please please let me get what I want.” Why aren’t more songs so to-the-point? Even Morrissey’s absurdity is direct, his pretension naked and unashamed: “Now I know how Joan of Arc felt, as the flames rose to her Roman nose and her Walkman started to melt.” Looking at the first page of his book it seems he has permitted no editor to prettify his wild jabberings with such conventional niceties as paragraph breaks. I can’t wait to read it.

By odd coincidence I read about the publication of Morrissey’s  Instant Classic while my ears were still ringing from a terrific gig by his erstwhile bandmate, the jingly-jangly guitar hero Johnny Marr, which I attended at the Bristol O2 with my brother-in-law on Thursday night. Marr scattered a generous helping of Smiths numbers amidst his new stuff  and the unfettered emotion with which the moshing youths sang all Morrissey’s words confirmed my view that The Smiths are one of those rare bands that will live on through the generations and will continue to be loved for as long as there are sensitive, socially inept, literary teenagers in this embarrassing cruel world, which is forever.

Richard Branson urges us here to worry more about Climate Change. I was delighted to read this comment on the piece from one Sébastien Landrieu:

We all have to work hand in hand to make teleportation a reality, this is the only solution for humanity, we then could export our shits in space and maybe burn’em in the sun? It’s tome clearly the only solution we have. We for sure have to reduce our productions to have enough time to find real solutions as I think teleportation won’t be ok in days…will you invest in it a few Richard?

Nige has praised his fellow Carshaltonian Roy Hodgson for being a cut above the average football manager. Twice last week Hodgson justified this with fine quotes. After England qualified for the 2014 World Cup finals by squeaking past Poland he said, with disarming unmanagerial honesty: “Every time they crossed the halfway line I died a thousand deaths.” And then following an entirely spurious hounding by the Thought Police over ‘racist’ language, he said pithily: “Joy is short-lived in this job.” Hodgson carries the air of an intelligent Everyman who isn’t quite sure how he ended up in such a dumb, crass business as football.

8am. The school and nursery run, a daily misery in which I have no slack whatsoever, and thus every red light or traffic jam is a dagger in the heart. The weather turned that morning and despite the cloud cover we were shivering in the first arctic needles of winter. As I pulled in by C’s school I misjudged the line and gave the kerb a mighty whack. ‘Oh dear, I hope I haven’t buggered the tyre’, I thought, climbing out to look. I had buggered the tyre. Completely flat.

With a great weariness in my soul I deposited C at breakfast club and went back to the car. E, who is 22 months old, decided to have a fit of hysterics about being in her car seat. I lifted her out and perched her in the boot while I attempted to locate the spare tyre. Then, after some while, I remembered that there was no spare tyre. Instead Vauxhall now supply you with an object  called a ‘space saver’ which apparently squirts some kind of gel into your buggered tyre. I prised this thing from its nook and tried to fathom its mysteries. It consisted of a black plastic round lump almost but not quite like a pump, and another thing with a nozzle. There were no instructions with it, nor with the other bits and pieces in the glove compartment. “Does anyone actually keep gloves in their glove compartment these days?” I asked E, irrelevantly. She made no answer. I got down on hands and knees to look under the car and make triply sure that there really was no spare goddamn tyre. There wasn’t.

As I stood up a teacher opened the school gate to throw something in the bins and through the gap I saw C queuing with her hands clasped behind her back to have a turn at hopscotch. I watched as a boy lumbered clumsily across the squares, followed by another who was even worse. Then C fair whipped across the grid with the exquisite nimbleness of a ballerina.  The gate closed and I turned back to the matter in hand. I picked up the Thing With The Nozzle again. A heavy goods lorry rumbled by too close and E began to cry so I scooped her up with my free arm. Together we looked at the Thing, and then at each other, and then at the sky. Some cracks had appeared in the cloud, and a greasy light was leaking through. It was Tuesday.

Dabbler Diary is brought to you by Glengoyne single malt whisky – the Dabbler’s choice.

19 thoughts on “Dabbler Diary – How Joan of Arc felt”