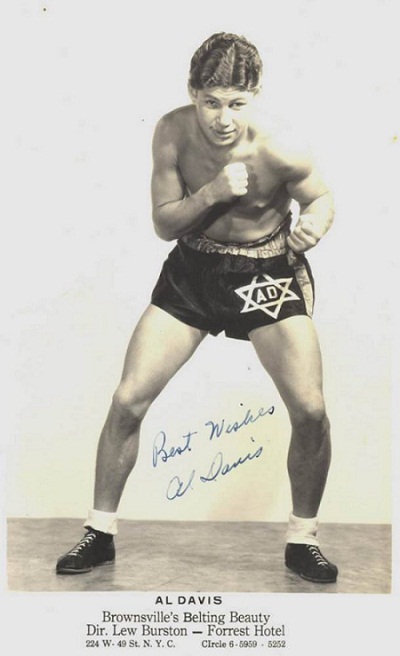 It’s a funny thing about people. People will hate a guy all his life for what he is, but the minute he dies for it they make him out a hero and they go around saying that maybe he wasn’t such a bad guy after all because he sure was willing to go the distance for whatever he believed or whatever he was.

That’s the way it was with Bummy Davis. The night Bummy fought Fritzie Zivic in the Garden and Zivic started giving him the business and Bummy hit Zivic low maybe 30 times and kicked the referee, they wanted to hang him for it. The night those four guys came into Dudy’s bar and tried the same thing, only with rods, Bummy went nuts again. He flattened the first one and then they shot him, and when everybody read about it, and how Bummy fought guns with only his left hook and died lying in the rain in front of the place, they all said he was really something and you sure had to give him credit at that.

That is the opening of what has been called the best magazine story ever written. It appeared in 1951 in True which was a sort of pulp, subtitled ‘The Man’s Magazine’ and issued by Fawcett, who would bring readers the Gold Medal brand of dime novel, and the piece was headlined ‘Brownville Bum’[1]. It was written by W.C. Heinz who was definitely big in the US but as far as I know made no impact this side of the Ditch. Not all of Heinz reads like that, though he wrote a novel called The Professional (1958) which is set around pro boxing, and co-wrote the book that became M*A*S*H. Above all he covered sports.

Sports don’t do it for me, but I once gathered a book of sports quotes: an NFL star commented on the position a revenant Christ would play: ‘a 6’6”, 220lb defensive tackle’; the unfortunate Brian London, whose fate it was to meet Ali in the ring, termed himself ‘a prawn in the game’, Babe Ruth rejected asparagus: ‘It makes my urine stink’. The best stuff was from the stateside sportswriters.

I don’t know what you make of Heinz’s lede, but to me it’s glorious and stands for the importance of American sportswriting to the wider world and the words – noir, hardboiled – that I mine for my vocabulary. I’m open to suggestion but we don’t do it this way here and other perhaps than Jonathan Rendall never have done nor could. Nor am I sure if it’s still available – sponsorship and celebrity culture probably won’t permit something that allows the reporter so much of an impact on the story[2] (And in what newspaper?). No matter: I’d always put my money on this sporting style to have put together the manual for what would become Hammett and even more so Chandler and all their terse, simile-laden successors. Some say Hemingway but ‘Papa’ couldn’t have gone a round with A.J. Leibling, and as David Halberstam put it, when it came to the art there was Heinz and Liebling, and then the rest. Stylistically there was also Joseph ‘Joe’ Mitchell, a virtual twin for ‘Joe’ Liebling and also at the New Yorker, but he was more a profile man. Anyway Hemingway was too worried about his bulls and his balls and indeed his prick (or certainly ‘poor’ Scott Fitzgerald’s) and in the end found the biggest substitute he could hold and blew his brains out. Chandler, channelling via Marlowe, called him ‘A guy that keeps saying the same thing over and over until you begin to believe it must be good.’ I prefer my hacks.

I’m no expert, but the style, which kept refining itself, seems to come on stream around World War I with the baseball reporter Ring Lardner, whose ‘busher’ Jack Keeffe, always seeing in his ego’s mirror something more than his abilities permitted, offered fame to his creator and the collection You Know Me Al to the fans. Alongside was Charles E. Van Loan, another baseball scribe, another fictioneer, another whose work, usually for slicks like the Saturday Evening Post, I have gutted with delight. There was already plenty of slang writing in the US – George Ade, Helen Green, ‘Hugh McHugh’ – but sports had their own demands. The first law being getting the excitement and the fluidity down in print. It didn’t work for every sport, but the best writers were drawn to the big tickets: baseball and boxing, which latter being mixed with the mob was real-life pulp already. Football was invisible outside the college game, and those write-ups opted for local patriotism, school spirit and other infantilisms. Fitzgerald, in his flapper phase, offered it a little literary exposure.

Van Loan had a pal: one Damon Runyon, and when he moved from the N.Y. American to the SEP he gifted Runyon his gig. Runyon invents a proportion of his lexis, but the ‘guys and dolls’, like Barry Humphries’ Aussie ingénu ‘Barry McKenzie’, boast a good deal more examples of established slang than their creators are credited for. Runyon needs no assessment from me; I would merely note that his pal, though an ex-hoofer rather than sports writer, was the man he called ‘Waldo Winchester’: Walter Winchell. On it goes. If Winchell is remembered it’s through a movie, The Sweet Smell of Success, but as a tummeler of slang’s latest coinages he served my purposes well.

These are the big names. By the late 1930s a well-stocked newsstand had sports pulps jostling for space with Black Mask and the rest. They had authors, of course, but I know nothing and they were probably pseudonyms. The text is…pulpy[3] though I haven’t pursued it.

The new journalism – Tom Wolfe and the rest – elbowed the sports men off the podium in the Sixties, but how really ‘new’ was ‘new.’ Look again at Heinz. And remember: 1951. Anyway, some of the stars knew their sport: Hunter Thompson had written on the Kentucky Derby before he hit the Fear and Loathing trail; Wolfe’s first acknowledged ‘new journalism piece’ was on hot rods; Gay Talese, another, had liked the beat because ‘Sports is about people who lose and lose and lose. They lose games; then they lose their jobs. It can be very intriguing’.

We readers have been fortunate enough to win. At least on paper.

[1] for the complete story, see http://bit.ly/TEBJdW

[2] a thought: did the style evolve to deal with the dull monosyllability, even illiteracy of many of the (early) stars; to transcend the mumbling and the press agentry? another thought: did people like Jimmy Cannon and ‘Red’ Smith, both masters of the form, so hate Mohammad Ali because he took away their jobs and left them nothing to do but take notes?