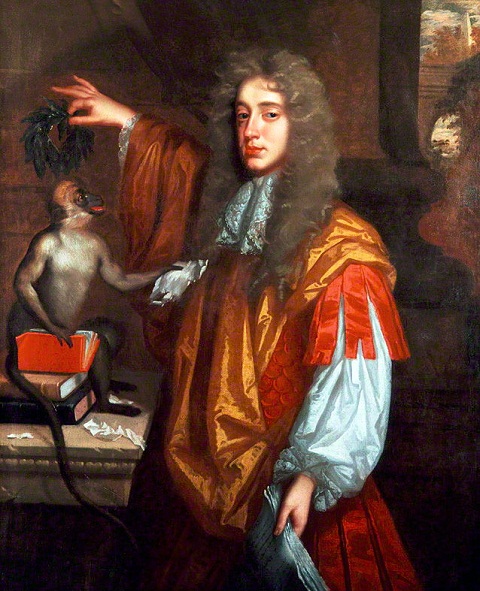 Jonathon’s latest Hero of Slang is a highly influential poet who wrote ‘more frankly about sex than anyone in English before the 20th century’. Be warned, by clicking Continue on this post you’ll be unleashing a fair torrent of 17th Century filth…

‘Rouse stately Tarse
And lett thy Bollocks grind
Heave up, faire Arse,
And lett thy Cunt be kind
To th’ Deed.
Thrust Pintle with a force,
Spend till my Cunt overflow.’

John Wilmot (1647-80), second earl of Rochester, was a member of the circle of fast-living wits and courtiers at the court of Charles II. Son of a Cavalier hero and a staunchly Puritan mother, he was educated as a typical contemporary aristocrat. Wadham College, Oxford, which he entered at the age of 12, preceded the Grand Tour, which in turn was followed by introduction at Court. Aged 18, after fighting sea battles against the Dutch, he abducted and married the heiress Elizabeth Malet. During one of his almost annual banishments from court, caused by extending the king’s patience too far, he allegedly set up on Tower Hill as ‘Alexander Bendo,’ a self-styled ‘German astrologer.’

Rochester’s wit and erudition were paraded in his poetry, which has been cited by critics as setting him among the last of the Metaphysical poets and the first of the Augustans. He died young, and thus his output, in which he could savage his own failings as acutely as those of others, was small, but it was varied and highly influential. Dryden, whose patron he briefly was, Swift and Pope were all influenced by him. For many people his subsequent reputation rests particularly on his lampoons, satires and erotic writings. He wrote, according to Margret Drabble, ‘more frankly about sex than anyone in English before the 20th century.’

In the words of Dr. Johnson, Rochester ‘blazed out his youth and health in lavish voluptuousness’ and Edmund Gosse called him ‘a beautiful child which has wantonly rolled itself in the mud.’ By 1680 he was seriously ill and spent his last months debating with a number of theologians; to the surprise of many, he made a deathbed conversion. He demanded that all his ‘profane and lewd writings’ be destroyed; they were duly burned, but manuscript copies, some of which it is believed were doctored to make them dirtier than they had been written, remained in circulation.

Despite this vocabulary, the poems centred on the ironies of passion and the problems involved in sex rather than on any lustful celebrations. Their first prosecution came in 1688, when Francis Leach, a contemporary pornographic bookseller, was arrested for their publication. In 1693 Elizabeth Latham was fined five marks and imprisoned for promoting the lasciviousness and vicious qualities of Rochester’s work. In 1698 they were subject to the first prosecution for the crime of Obscene Libel in the higher courts. The poems remained cen­sored, even in those editions that were published for mass consumption, for several centuries.

Rochester’s… masterpiece is hardly the word, so let us call it his lowest depth of all, was his single venture onto the stage: Sodom: or, The Quintessence of Debauchery This play in five acts, a prologue and two epilogues, was published in 1684 as a play ‘by the E. of R.’ Rochester disclaimed responsibility and for a while it was attributed to John Fishbourne, a barrister. Neither his contemporaries nor generations of scholars have been willing to accept Rochester’s disclaimer and the original Dictionary of Na­tional Biography notes it as a work of ‘intolerable foulness.’ To be fair, a num­ber of modern scholars have supported the earl, claiming on both stylistic and chronological grounds that Rochester was in­nocent of the play’s authorship. Either Fishbourne did indeed write it or it was the joint production of various authors, one of whom admittedly might have been Rochester. But the play appears in the earl’s most recent ‘Complete Works’ (1999) and so be it. It is unlikely that anyone else would wish to lay a claim.

To take it, for a moment, seriously the play represents the first example of English libertine writing – for instance his contemporary Henry Neville (whose Isle of Pines is a salacious pun), Aphra Behn or the work of Thomas Shadwell, whose Squire of Alsatia (1688) did for criminal slang what Rochester did for filth, albeit with a great deal more popular exposure. The play also satirizes the literary and moral pretensions of works written in the then fashionable heroic couplet form, the form in which it appears itself. It has also been suggested that it pokes fun at Rochester’s Oxford college, Wadham where at the age of 13 the youthful lordling had first encountered the pleasures of the bottle and the flesh..

But lit. crit. aside, what Sodom is about is filth, and the language in which it is represented. Nowhere more than in its cast list: Bolloxinion and Cuntigratia, ‘King and Queen of Sodom’; Pricket and Swivia, ‘young Prince and Princess’; Pockenello, ‘Pimp, Catamite and Favourite to the King’, Buggeranthos, ‘Generall of the Army’ and the ‘maids of honor’ ffuckadilla, Clitoris and Cunticula. That is, bollocks, cunt, prick, swive (an early synonym for fuck), syphilitic pocks or pox, buggery and fucking. Contemporary feminists doubtless approved the writer’s acknowledgement of the clitoris.

Its default mode is debauchery and all characters copulate ceaselessly. As for stage directions, Shakespeare may have had his much-loved ‘exit, pursued by a bear’, but Rochester offers: ‘Six naked men & six naked women appeare & dance. In their Dancing ye men do obeysance to ye womens C[un]ts, kissing & tonguing them often. The women in like manner do Ceremony to the mens P[ric]ks….’ That all ‘so fall to Copulacion’ comes as no surprise. The supreme pleasure, as underlined in the title, is sodomy, although such pleasures as incest are not overlooked. The play ends with the apocalyptic destruction of the kingdom.

Sodom entered no professional repertory, but it was supposedly performed once, before King Charles’ court. None of the early printed editions have survived, although there were allegedly two printings by 1707. One of these may have survived until at least 1865. Today, like everything else, there is an edition available on Amazon.

17 thoughts on “Heroes of Slang 23: John Wilmot, Earl of Rochester”