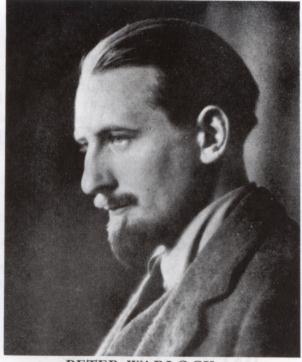 I have been reading Peter Warlock : The Life Of Philip Heseltine by Barry Smith. Dabblers will be familiar with Warlock from Mahlerman’s succinct potted biography, and indeed I suspect that may tell you all you need to know about the combative drunkard composer. Almost all, but not quite. Mahlerman did not mention Heseltine / Warlock’s penchant for naked night-time motorcycle rides along countryside lanes, nor the fact that, seven months after he gassed himself in his Chelsea flat, his “intermittent girlfriend” gave birth to a baby who grew up to become the art critic Brian Sewell. (Sewell only discovered his father’s identity in the 1980s.)

The chief pleasure of Smith’s biography, for me, is the – often tangential – appearance of other characters, with most of whom Warlock managed to fall out sooner or later. Frederick Delius, D. H. Lawrence, and Nina Hamnett, “the Queen of Bohemia”, all show up. And I am beginning to wonder if it is possible to read any biography covering the first half of the twentieth century in which the preposterous figure of Aleister Crowley does not have a walk-on part.

But the great discovery is a man who we must thank Barry Smith for resurrecting from obscurity, and about whom one wishes to know much more, though it is doubtful we ever will. In the late 1920s, Warlock spent a few years in a cottage in the Kentish village of Eynsford. Its attraction may have been the presence of twenty-seven pubs within a four-mile radius. Here, Smith tells us,

Close to the ruins of Eynsford Castle, Philip shared the small main-street cottage with his composer friend, E. J. Moeran, together with a collection of cats and a Maori housekeeper-cum-factotum, Hal Collins (Te Akau) (d. 1929). Collins had previously been a barman at a London drinking club. [Cecil] Gray gave this intriguing description of him:

“In contra-distinction to this more or less floating population of cats and women, a permanent member of the establishment was a strange character called Hal Collins . . . whose Maori grandmother had been a cannibal and used, within his memory, to lament the passing of the good old days when she could feast upon her kind. Besides being a graphic artist of considerable talent, particularly in woodcut, he was one of those people who, without ever having learned a note of music or received a lesson in piano playing, have an inborn technical dexterity and a quite remarkable gift for improvisation. He used to compose systematically, also, but without being able to write it down; I remember him once playing to me a whole act of an opera he had conceived on the subject of Tristram Shandy . . . He subsisted chiefly on stout, of which he consumed gargantuan quantities, and when elated would perform Maori war dances with quite terrifying realism. On spirits, however, he would run completely amok, in true native fashion, and on one occasion almost succeeded in massacring the entire household.”