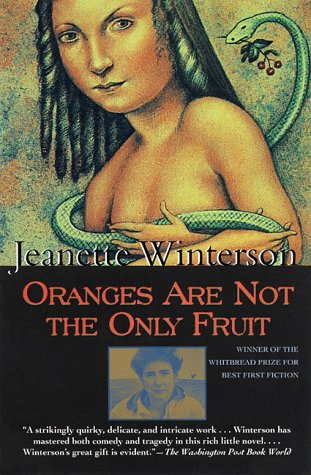 ZMKC enjoys a modern classic, available for a penny on Amazon….

I think I may be the last person in the world not to have read Oranges Are Not the Only Fruit. Indeed, it is possible that the only reason the book is actually available for 1p on Amazon is that the market for it is already entirely saturated. However, if I am wrong and there are in fact others out there who, like me, have been hesitating about reading it, all I can say is, ‘Go for it. You’ll enjoy it. It really is very good.’

Not that I didn’t think the book was very good even before I read it. After all, everyone had told me for years about how good it was. The thing I wasn’t sure about was whether it would be enjoyable. The tale of a girl who grows up in a madly strict Christian cult, falls in love with another girl and is kicked out of home sounded to me like Angela’s Ashes with added hellfire and brimstone – and misery memoirs have never appealed to me.

But Oranges Are Not the Only Fruit isn’t a misery memoir. Quite the opposite – the book is hilarious. Perhaps to mask the genuine pain of the more autobiographical material in the novel, Winterson plays her story almost entirely for laughs. Indeed, as gag after gag flowed across the page – tours of the country equipped with ‘evangelical action kits’ and flags made by disabled missionaries, cheese and onion sandwiches flying into collection bags, loud hymn-singing to drown out next door’s ‘fornication’ (‘On a Sunday!’) – I began to wonder whether, had she been born more recently, Winterson might not have become a stand-up comedian instead of a writer.

I’m glad that she didn’t though: stand-up is both ephemeral and ultimately a bit shallow, whereas the novel form gives Winterson the opportunity to mix in other elements, alongside the farce. She does this by interleaving her story from time to time with her own odd folk tales. These, it seems to me, operate in the same way dreams do. The conscious part of the book romps happily on, putting on a brave face, and then the fable cuts in, providing a somewhat surreal but still entertaining alternate perspective. Here is an example; it seems to me to convey tangentially what it probably felt like for the central character, Jeanette, to find herself simultaneously banished from the mad, intense world she grew up in and an outsider in the ordinary one she must now live in:

Winnet…found herself in a part of the forest that looked the same but smelt different … Soon she ran out of food and spare clothes, then homesickness struck her , and she lay unable to walk for many days. A woman travelling in the forest found her body, and by means of herbs revived her… The woman tried to teach Winnet her language, and Winnet learned the words but not the language. Certain constructions baffled her, and in an argument they could always be used against her, because she could not use them in return. But mostly this didn’t happen. The villagers were simple and kind, not questioning the world … Winnet … wanted to talk about the nature of the world, why it was there at all, and what they were all doing on it … She had to pretend she was just like them, and when she made a mistake, they smiled and remembered she was foreign.

Winterson’s style is very direct. The main part of the book reads as if the child protagonist is telling you her story breathlessly, just recounting it as it happened, without reflection or understanding. The events she describes are as bright and clear as if she were actually experiencing them as she speaks. Very occasionally, a wrong note is hit – most notably a comment about the Khmer Rouge which struck me as absolutely silly (and in this context Winterson’s tweet following Margaret Thatcher’s death – “Realise that Thatcher, the Queen, and Mrs Winterson are fused like the Triple Goddess in my head. Might explain everything. Oh well, 2 down.” – also struck me as jarring, but none of us are perfect). Despite the very occasional flaw, Oranges Are Not the Only Fruit is entertaining, moving and very hard to put down.

5 thoughts on “1p Book Review: Oranges Are Not the Only Fruit by Jeanette Winterson”