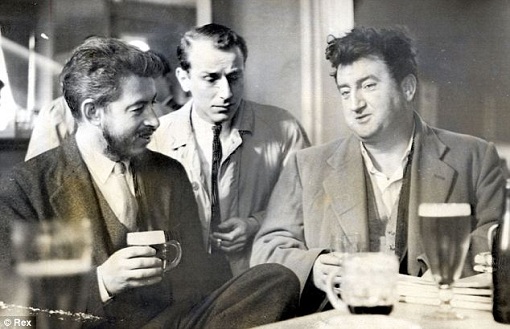 This exclusive extract from the Spring 2013 issue of Slightly Foxed quarterly is by Dabbler editor Andrew Nixon, and looks at the dark appeal and extraordinary publication history of J.P. Donleavy’s cult novel The Ginger Man…

‘This’, said my father, handing me a battered paperback, ‘is the sort of book that people used to hide behind a newspaper when reading it on the train.’ I was 16. I took it reverently.

It was a 1967 Corgi edition of The Ginger Man by J. P. Donleavy: ‘Complete’ and, most promisingly, ‘Unexpurgated’. Of course I had no inkling then of the tortuous publication saga that lay behind that word ‘Unexpurgated’. Nor was I to know that the novel would come to have a profound effect on me – on the way I thought about literature and language, and about human nature in all its secret darkness. I retreated to my bedroom to devour The Ginger Man, but by the time I’d reached the first sex scene I’d forgotten that it was supposed to be a dirty book because, like so many readers before me, I had become transfixed by the outrageous charisma of its protagonist, that indelible monster Sebastian Balfe Dangerfield.

Discharged from the US Navy, Dangerfield is studying law at Trinity College, Dublin, class of 1947. He is not a good student. In and out of the city’s seediest pubs and vice dens, trading blows and banter with Ireland’s craziest drunks, he spends his time raising hell and seducing vulnerable women. ‘I’m a man for bedlam,’ he declares. His misadventures are frequently hilarious: he flees one bar brawl on an uncontrollable bicycle, starts another dressed as a kangaroo.

Revolving around him is a cast of lunatics and ne’er-do-wells, avant-garde Irish alcoholics and American ex-servicemen hungry for civilian action. Everyone is permanently broke. Denied a regular income by his rich father across the Atlantic, Dangerfield survives by sponging off women and running up credit with shopkeepers, all of whom fall for his good looks, charm and Anglicized vowels (‘I’m down to my accent,’ he observes in a bleak moment). He scurries to the pawnbroker with anything that isn’t screwed down and even one thing that is: a mirror in a pub toilet, which he unscrews with a fork. All ill-gotten gains are spent instantly on booze, and so his life ploughs aimlessly on, a blurred carousel of scrounging and starving, fighting and fleeing, in farce and despair.

Given this, The Ginger Man might have been a bawdy comic romp, with Sebastian Dangerfield the picaresque anti-hero. But it is not, because something much stranger and darker lies at the heart of the novel.

‘Mr Dangerfield, would you pass me your plate. Why do you water that little plant in the front with an eye dropper?’
‘Miss Frost, you’ve been spying on me. On me in my secret moments.’
‘O I haven’t. But why do you do such a funny thing?’
‘I’m poisoning the plant.’
‘Lord save us.’
‘Now look at that plant out there, Miss Frost. Would you say it was much longer for this world?’
‘O Mr Dangerfield I don’t know what to say. That poor plant.’
‘It’s something in me, Miss Frost. I thought to myself why don’t I slip this plant something to kill it.’
‘You don’t mean that.’
‘I’m a killer.’

Such is Dangerfield’s motiveless cruelty. Less amusing is his treatment of his young wife and daughter. Early in the book, a domestic row turns violent:

Marion lunged, her slap landing across his jaw. The child began to scream in the nursery. Sebastian up off the table. He drove his fist into Marion’s face. She fell backward against the cupboard. Dishes crashing to the floor. In tattered underwear he stood at the nursery door. He kicked his foot through and tore off the lock to open it. Took the child’s pillow from under its head and pressed it hard on the screaming mouth.

There is nothing comic about that incident: it is unforgivable wickedness. Donleavy sacrifices our sympathy for his protagonist early on in the book, yet asks us to stay with him, even laugh with him. And despite ourselves, we do. Why? This is the troubling mystery of The Ginger Man.

Over the past half-century a procession of journalists have ventured deep into rural Ireland to track down James Patrick Donleavy and write ‘Whatever Happened to The Ginger Man?’ pieces for the broadsheets. Each paints a similar portrait. Donleavy lives reclusively in a crumbling estate in County Westmeath. Here he has cultivated the persona of an Anglo-Irish country squire: tweedy, formidably bearded and with a bizarre mid-Atlantic accent amalgamating his Bronx upbringing, Irish parentage and pretensions to the English landed gentry.

He combines aristocratic manners with a spiky, almost paranoid combativeness. While serving tea in formal style he tells lurid tales of Dublin in the 1940s when he ran with Brendan Behan, Patrick Kavanagh and other hell-raising artists who provided the models for his characters. Most interviews seem to conclude with him leaping up to demonstrate his boxing prowess by throwing seven air punches in a second. Comical perhaps, but it is this pugnacious streak that enabled Donleavy first to get The Ginger Man published, and ultimately to triumph in one of the most bitter and protracted legal battles in literary history.

The Ginger Man was Donleavy’s first novel and it took him four arduous years to write. Convinced it was a masterpiece, he was determined not to compromise on material that was, in the 1950s, certain to be banned for obscenity, with the consequence that the final manuscript was rejected by over thirty publishers in Britain and the United States.

Apparent salvation came when Brendan Behan suggested trying the Paris-based Olympia Press, which was already putting out avant-garde literature by Samuel Beckett and Henry Miller and would soon publish Naked Lunch and Lolita. Olympia’s charismatic owner Maurice Girodias read The Ginger Man and agreed to take it on.

The first inkling Donleavy had that something was amiss came when Girodias complained that ‘the reader does not become engaged in the book . . . until p.100 or thereabouts’. It was on p.100, Donleavy belatedly noticed, that ‘there appeared the first considerable account of a sexual nature’. His suspicions were further aroused when he was required to collect his advance payment in used banknotes from the basement of a seedy Soho bookshop.

Full realization of Girodias’ duplicity came when Donleavy received his first printed copy. For Olympia’s chief source of income was erotica, and with the authorities breathing down his neck Girodias intended to use The Ginger Man to give his business a veneer of literary respectability. To this end he included it in a pornographic series called ‘Traveller’s Companion’, and when Donleavy turned to the back of the volume he saw his precious novel listed alongside such titles as White Thighs, School for Sin and The Sexual Life of Robinson Crusoe. Furthermore, The Ginger Man was marked as a ‘special volume’. Girodias claimed that this denoted its literary merit but, as Donleavy pointed out, it might also be interpreted to mean that The Ginger Man was ‘a particularly raunchy variety of dirty book’.

Donleavy vowed revenge. He cut the manuscript to meet British censorship standards and took it to the London publisher Neville Spearman, who published the first English edition in 1956. Girodias retaliated by publishing his own expurgated version with a dust-jacket containing a diatribe against Donleavy, who promptly sued him. And so the tit-for-tat legal battle began, both parties claiming ownership of the publishing rights. Counter-suit followed counter-suit for over twenty years, and the saga was only resolved when Donleavy’s wife dramatically bought the Olympia Press from under Girodias’s nose at auction. Thus Donleavy found himself in the position of suing himself, and was able to bring the whole sorry business to a close.

In the meantime, the world had changed. Corgi printed the first unexpurgated edition in 1963. It has since sold over 45 million copies worldwide and has never been out of print. Donleavy went on to write a further twelve commercially successful novels, yet what little critical reputation he still enjoys rests almost entirely on The Ginger Man. This is unfair, but only slightly. A Singular Man and A Fairy Tale of New York are fine works, but only Sebastian Dangerfield is indelible.

Critics have puzzled over The Ginger Man for years without solving its mystery. In the 1960s Donleavy was grouped with the ‘angry young men’, but the snobbish Dangerfield couldn’t be further from a working-class hero. Reviewers have raved, but about completely different things. Dorothy Parker called The Ginger Man ‘the picaresque novel to stop them all. Lusty, violent, wildly funny, it is a rigadoon of rascality, a bawled-out comic song of sex.’ Conversely, John Banville has praised ‘the sense of sweet and delicate melancholy that clings to the pages’.

Lusty and violent, yet sweet and delicate? The answer to the puzzle lies, I believe, in the book’s extraordinary style. From the opening sentence (‘Today a rare sun of spring.’), the deranged, grammar-mangling prose hops ceaselessly between first and third person, past tense and present. As Donleavy himself has put it: ‘I just focused on how to get the words off the page and into the reader’s brain, as directly as possible.’

Growl back to sleep. Pull the legs up in the foetal crouch. Marion wearing my underwear. Sometimes the sun would sneak in. Then Marion beating barefoot on the linoleum. Entreaties. O do get up. In my heart where no one else can hear me, I was saying, now for God’s sake, Marion, be a good Britisher and get down there in that little nest of a kitchen and buzz on the coffee like a good girl and would you, while you’re at it, kind of brown up a few pieces of bread and I wouldn’t mind if maybe there was the suggestion of bacon on it, only a suggestion, and have it all ready on the table and then I’ll come down and act the good husband with, ah darling good morning, how are you, you’re looking lovely this morning darling and younger every morning. A great one that last. But I come down martyred and mussed, feeble and fussed, heart and soul covered in cement.

Dangerfield’s interior monologue is so absorbing that his actions in the physical world appear almost as strange interruptions. He is witty, incisive, delusional, mournful: an all too human mass of contradictions. This is why The Ginger Man is simultaneously ‘violent’ and ‘delicate’, with a realism that shocks even today. In 1992 Donleavy said:

The Ginger Man still provokes reactions. Not on its sexual implications, the so-called obscenity of the book; more because people connect with its reality right away, and once you get into the reality of this work, suddenly what might be obscene hits you much harder.

We know Dangerfield directly, without the interventions of authorial judgement or plot-driven motive, and such intimate knowledge makes it difficult simply to condemn or forgive. This is the mysterious power that has sent generations of journalists deep into rural Ireland, and transfixed 16-year-old boys in their bedrooms.

The final words of The Ginger Man are a prayer. At the end of his adventures Sebastian Dangerfield has learnt no lessons and received no comeuppance. It is scandalous, and yet, when I finished the last page of that battered Corgi paperback I could not help but join in – as I still do today – with Donleavy’s plaintive plea for:

You can buy your subscription to Slightly Foxed – the real reader’s quarterly – here.

13 thoughts on “The Wild Ginger Man”